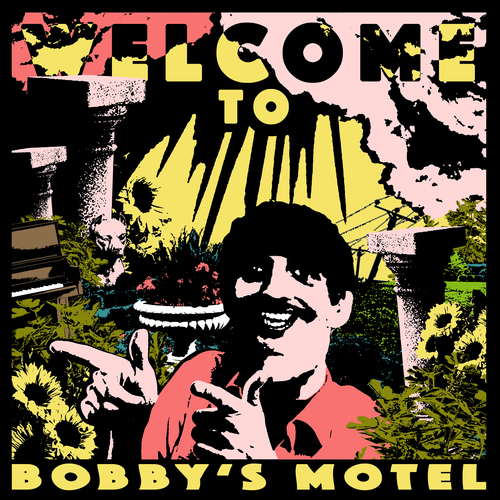 Single ‘Texas Drums, Pt. I & II’ teased an album which mashes together off kilter garage rock with elaborate, theatrical group vocals.  Pottery stick every bell and whistle on this track, melding the whole production into one with gloriously fuzzy guitar tones.  It has hilarious (explicit, but muffled) lyrics which made me think their album would be a laugh.  I was correct.  Whilst nothing quite tops this single, there are plenty of interesting avenues explored on Welcome to Bobby’s Motel.

I’m in love with the cow bells and driven guitar riff which kick off ‘Bobby’s Forecast’, it takes a left turn into the band channelling a groovy, disco song with more of those brilliant theatrical vocals.  They raise the temperature substantially on the fast moving, unhinged, squeaky guitared ‘Down in the Dumps’.  It makes for a nice change of pace.  Despite only being uttered twice, the sticky chorus lyrics “I’m… down in the dumps!” will stay with you long after you finish the LP.

‘Hot Heater’ sounds like the group is perhaps drawing a little too heavily from Talking Heads’ ‘Psycho Killer’, particularly the vocals, but when you dig deeper there is some of their own personality at play.  Some sections of this song are a little stilted, it could have a better flow and lead to a more satisfying payoff.  I much prefer the jagged and manic ‘Under the Wires’, which has a bizarre breakdown of skeletal guitars and watery synths in the middle section, before becoming a more fidgety, scrappier song that you could imagine The Fall performing in the late 1980s.

The weird but structurally simple ‘NY Inn’ is a low key favourite of mine.  The dramatic, hyperbolic intro offers one of the highlights of the record.  The aptly named ‘Reflection’ is a spacey, New Order sounding track with some gorgeous synths and dramatic vocals.  In the middle there is an intriguingly anachronistic rock breakdown – a nice oddball touch for an otherwise pleasing but conventional song.  The final track, the beautiful ‘Hot Like Jungle’ mines a similar space but makes it far more Pottery’s own – with heart warming and carefree results.  It is nice that not every track is full of nightmare fuel.

‘What’s In Fashion’ is a frustratingly meh track, it does very little with its meandering Kinks licks to explain its inclusion on the track list.  Compare this to the vital and vicious ‘Take Your Time’, the verses of which sound like the soundtrack to a panic attack induced murder spree.  It then relaxes into something far more anthemic.

Throughout this record I hear a band who wants to twist and experiment with every formula they lay their hands on, often switching styles mid-song.  Given how many other bands I have mentioned in this review I feel it’s worth emphasising this point.  With one or two exceptions, they are not just stealing other group’s aesthetics, they are contorting them and making them weird again.

Welcome To Bobby’s Motel is out now on Partisan.