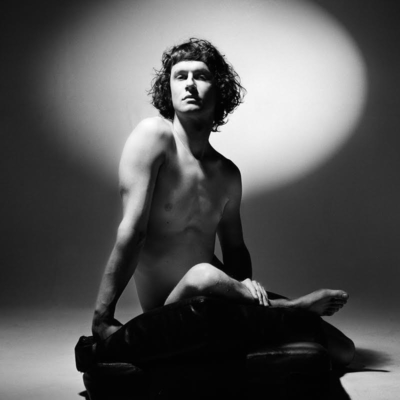 The brains of the outfit belongs to Tom Rees, somewhat of a Cardiff legend as he helms production for a number of local and upcoming Welsh bands, such as Clwb Fuzz and Telgate.

But this is his day job.

Let’s be frank here. This is unashamedly 70’s glam. This is T-Rex, David Bowie, Slade, Sweet and Mud in a microcosm of over the top, camp wonderment.

It’s not that the holes have not been barred, it’s that they have been ignored and sped past in a shower of flares, platform boots and massive hair.

‘Double Denim Hop‘ has been around a while now in one guise or another. There are dance and disco and probably reggae mixes but this standard original version opens things up with all the over the top, joyous rock’n’roll required.

‘Hollywood Actors‘ is even bigger and bolder. Part what appears to be advice to people not to be fake and pretend to be someone they aren’t and also part a slating and slaying of actual Hollywood actors who were once Joe Normal and are now A-listers with the ego and diva behaviour to match. It’s a fur coat wearing woolly mammoth of a glam rock strut with a sky-scraping finale. Not to labour a point from previous reviews but this will be colossal live in a dark, sweaty room. *Wipes tear from corner of eye*.

You cannot fail to be impressed by a key change IN THE MIDDLE OF THE CHORUS on ‘Stockholm City Rock‘ which elevates what could be a bit of a routine repetitive chorus. This is what Tom Rees does so well. He takes a simple concept but adds a flourish that means it is more than the sum of its glam rock parts.

Then there is the tongue in cheek stomp along of ‘John Lennon is my Jesus Christ‘, a veritable A List rock stars name dropping of a ditty that perhaps semi-autobiographically depicts a fan extolling their heroes as gods and deities on their pedestals of pop perfection. “Well if you’re feeling low/And you feel you’re stuck in a hole/Well put your hands together for your God of rock and roll”. It’s that simple, kids.

‘Sugarloaf Mountain Crucify Me‘ is Rees sat on the edge of the stage after everyone has left, he thinks he’s all alone until the band appear behind him and give it a final flourish, almost as if ‘The End‘ is crashing into “A Day in the Life” if Marc Bolan had done it.

You have to leave you cynicism at the door with your coat and scarf of snobbery. Some of the hipsters whose lists of the best of the year so far only include bands with no vowels, acronyms or top of the pop chart bothering singers that’s in no way being ironic, will no doubt sneer at this because it dares to be a bit seventies rock’n’roll as if eighties synth is somehow an untapped mine of undiscovered gold.

Buzzard Buzzard Buzzard perfectly manage to sidestep the over the top cartoonish stylings of The Darkness and the prog pomposity of Muse or Wolfmother by being sincere enough to just want to strap on a triple humbucker, yellow Gibson SG and let rip. Imagine not wanting to do that.

Glorious loud, riff-tastic, homage to a gone but not forgotten time.