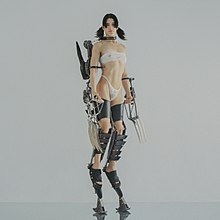 Those unfamiliar with Arca’s glitchy and experimental solo career may have come across her production work, most notably on Kanye West’s Yeezus or FKA Twigs’ EP2.  KiCk i is the first album from this powerhouse of a producer since she came out as non-binary in 2018, later stating that she is a trans woman – a theme which runs deeply throughout this record.

I’m usually not a fan of abstract, fragmented music, but Arca ties together the splintered components of much of KiCk i perfectly.  The songs aren’t short but they whip by along an incredible pace.  ‘Time’ is a shaken up and emotionally shot pop song with plush bubbling synths and reverb drenched vocals.  ‘Mequetrefe’ sounds as if she took all of these elements, chopped them up and shot them out of a machine gun.  The half singing, half rapping on ‘Riquiqui’ brings out otherworldly characteristics in Arca’s voice, bolstered by a patchwork of bizarre and explosive sounds.  In complete opposition to this, her grand choir vocals on ‘Calor’ is stunning against the backdrop of what sounds like broken, whirring engines and echoey chimes.

She lays the foundations of this record with an impenetrable series of solo tracks before we’re treated to four perfectly selected features.  Bjork, Shygirl, Rosalia and Sophie are all at important points in their careers, independently creating iconic work of their own.  Each of them bring their familiar voices into Arca’s world.  My favourite has to be Shygirl’s choppy performance on ‘Watch’.  Arca’s production gets particularly scatty and gritty in anticipation of Shygirl’s typically spiteful, brutal vocal performance.  I was surprised that bubblegum bass legend Sophie provided my least favourite feature here, given that her album was one of my favourite releases of the 2010s.

Weirdly I connect a lot less to the last third of the record.  From ‘Rip the Slit’ onward it loses some of its oomph, this song in particular sounds uncharacteristically thin.  Arca’s pitch shifted vocals lifelessly float along a confusing muddle of vaguely euphoric synths.  ‘No Queda Nada’ is a wandering and uninspired way to end a record which for the most part is bursting with inspiration.  Despite this, I’d still describe KiCk i as a “must listen”.  No other artist is creating compelling, complex soundscapes like these.

KiCk i is out now on XL.