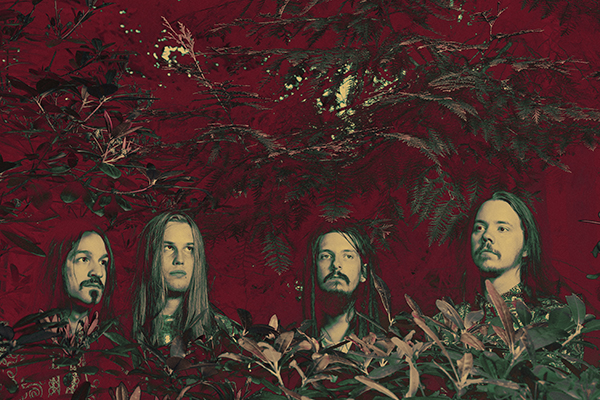 On 11 September Finnish experimental shoegaze outfit Kairon; IRSE! will release their third album Polysomn.  Fans have waited three years to hear new material from the group.  Their initial singles have promised a panoramic set of songs which could shoot off in any direction.  The group’s guitarist Niko Lehdontie was in conversation with Richard Wiggins to find out how they are finding 2020 and explore the process of putting together Polysomn.

How has Finland been during the pandemic?  Have you been able to keep up any semblance of normality with the band, practising or anything you’d usually associate with an album cycle?

Niko: Finland has been lucky compared to some other countries in terms of the pandemic.  Public places were shut down for a couple of months but since June they’ve been slowly re-opened and things are now almost back to normal.  Our original plan was to play a few Finnish and European festival shows during the summer and do an European tour in Autumn, but these plans have all been cancelled.  Hopefully, we can start playing shows next year in Europe supporting our new album.

Your music, to my ears, fuses shoegaze and much heavier, crunchier post-rock.  Does this reflect how you see the band’s sound?  Is this a style which came naturally to you or did you have to actively work at fusing these genres together to create something new?

Niko: Well it’s not far from your description.  We like to experiment with our sound, but we’ve always been drawn to loud noisy guitars and dreamy atmospheres.  The sound and dynamics in our music have evolved naturally since we all like to play energetic music, yet we love catchy melodies and beautiful chord progressions.  At the core, we try to create quite basic pop songs, but then we soak them with layers of sounds and chaos.  We like to play around with the contrast of beautiful parts and heavy weirdness, in the similar way The Flaming Lips and My Bloody Valentine have done.

‘An Bat None’ was the first single you released off of the new album Polysomn – it is a huge, expansive song.  Like much of your previous output even at low volumes it feels extremely loud.  How loud do you play when you write and practice?  Please say you use ear protection.

Niko: The writing process varies with each song, but we experiment a lot with the loudness at our rehearsal place.  When we write music individually at our homes with DAW’s or whatever, it isn’t that loud.  But whenever we arrange this material at our rehearsals, we tend to blast it pretty loud.  The songs need a lot of dynamic variation to represent a vast array of moods and emotions.  And yes, we do wear ear protection.

When my band writes we feel like we have little choice over what we’re creating – it just happens.  Is this the same for you or do you generally set out with a general vision in mind?

Niko: It certainly is like that.  We usually create our songs as far as we want to individually, but after we bring those songs to our rehearsal place, they get arranged by all of us, and the final result can be a lot different.  The same goes with the recording process, you might find new things and start to evolve songs into a different direction.  We usually have pretty strong vision before we enter the studio, but we do not fight against the natural evolution of the songs, even if we are already in the recording process.

How did producing this third LP yourselves compare to working with outside producers?  Did you learn anything new about your music?

Niko: It’s a better way for this band.  We had a clear vision of what this album should sound like, so I chose to do all the mixing and technical stuff by myself.  I’m very obsessed with how our band’s sound is represented, so I wanted to see if I could pull it off.  Needless to say, the band and I learned a lot during the process.  I’m pretty confident we will continue to make records this way in the future: making everything by ourselves.

In the process of writing and recording each album, how much ends up on the cutting room floor?  Do you ever revisit ideas that you abandoned years ago?

Niko: With each record, we try to build a seamless whole and if a song doesn’t fit in, it gets taken out.  We have songs and ideas that haven’t made the cut yet, and we are revisiting them every time we start writing material for a new album.  For example, there is this demo from the Ruination sessions that we all like, but it was too “noisy” for that album as well as for Polysomn.  Now with the next album in the making, we have been experimenting with the song again, so maybe it’ll find its place there.

One thing that ties together all of your records is a spooky, psychedelic edge.  I often feel that people overstate the connection between creating psychedelic music and taking drugs – can you settle this debate for me?  Am I wrong?

Yeah, it’s overstated for sure.  I’m not against psychedelic drugs at all, but the music is more than that.  To me, it’s about the production and sound aesthetics, maybe even song structures.  It is imaginative, experimental and should evoke unusual feelings in the listener.  At its best, it takes you through different moods, like a comfort blanket that can suddenly catapult you into the abyss.

Check out Kairon; IRSE!’s Bandcamp to hear the first two singles ‘An Bat None’ and ‘Welcome Blue Valkyrie’ to be released from Polysomn – https://kaironirse.bandcamp.com/