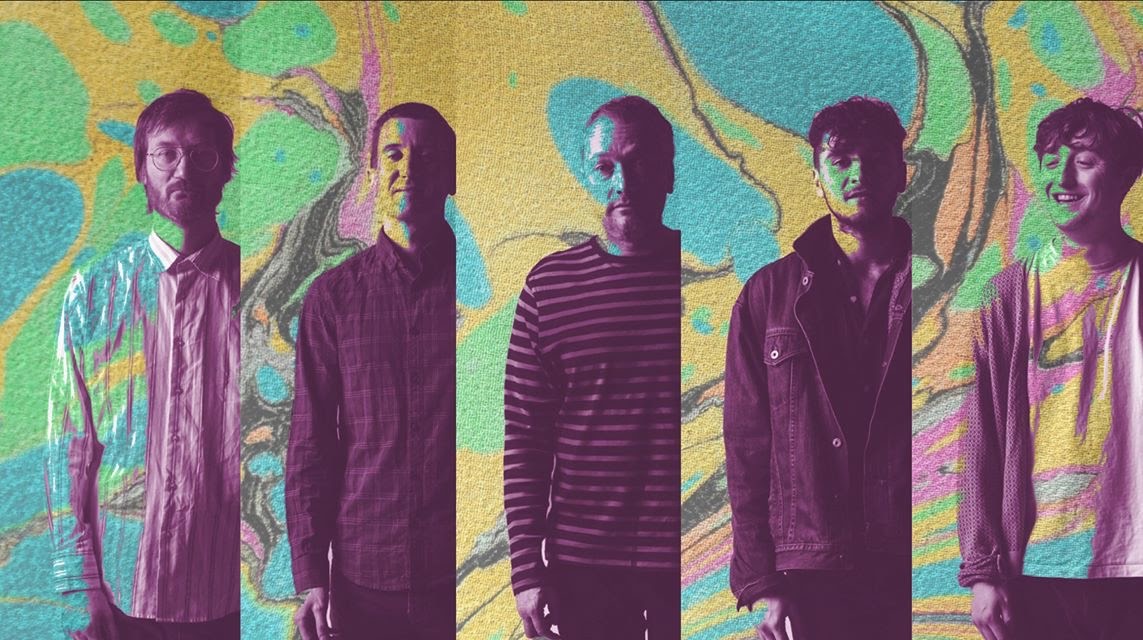 Matthew Evans, vocals guitar and songwriter for Cardiff-based KEYS, is a self confessed music nerd. Popular music got under his skin so much and buried deep for such a long  time it has, he confesses easily and with good humour, physically changed him.  We all find ourselves walking to the beat of a tune in our head as we daydream or are out and about, but Evans takes it a stage further.

“Every room I walk into, I’m like Robocop,” he explains. “I have this computer programme that goes, is this a good room for recording in and if so, what can I record in here? Brass, drums, vocals, you know? Every room. I walk around with earplugs in a lot because I just get carried away by the sound of rooms!”

It’s easy to amuse ourselves with the ins and outs of such a quirk, but practically speaking it opens up possibilities and opportunities, unconventional spaces morphing into creative breeding grounds when needs be. For KEYS’ 2019 album Bring Me The Head of Jerry Garcia, the hall of the Resolven Miner’s Welfare Institute was turned into a temporary studio, “the reverb you hear on the record is that hall singing back to us”, Matthew said at the time of release. Making new album Home Schooling, recorded in very recent weeks indeed, the best acoustics within the confines of pandemic restrictions were in the most intimate of comfortable, familiar settings – his bedroom at home.  The claim that the room quietly boasts the best acoustics in the house with its soft furnishings, and a wardrobe yurned impromptu vocal booth is a logic one can’t argue with.

The album wasn’t intended as a release at all, but instead started life as a series of songs to keep him occupied over our collectively weird summer, something to turn to, on top of remote working and, as the title suggests, home schooling his children.

“I was going loopy. If I’m not writing, as a songwriter I do get tetchy and I’m not very nice to live with.  So it was more of a therapy thing I suppose. It has this patchwork feel these different styles that don’t really go together because it was never intended to be like that.”

On the record there is an element of randomness, but also a freedom that goes with not working within a set frame. ‘Home Schooling’ is spontaneous and instinctive, the songs written and recorded quickly, no analysis or fretting if each fit or not. The songs are an escape, if you like, and whilst we get the – obligatory for 2020 – krautrock and The Beatles flashing their ankles, Matthew explores more diverse pastures. He talks enthusiastically of 1970s Midlands pop, the album’s first single ‘The Side of Luv’ a glam platform heeled stomper emerging from his lifetime of fondness for Roy Wood vehicles Wizzard and The Move (“They never get mentioned in the great 60s bands, not as cool as those other references,” he says of the latter).

The title track is an anarchic two minutes of spiky punk and wild spoken, shouted word, whilst on ‘The Strain’ we hear and feel the whorls and patterns of Bad Finger’s unmistakable fingerprint. Matthew sat down and listened to a load of Bad Finger prior to lockdown as it happens, and talks of a shared “Swansea soul”.

“Not all of it is good actually,” he says of the band’s back catalogue. “When it is good, and it’s usually when it’s Pete Hamm being himself, it’s breathtaking and beautiful. So many good songs there.  I listened to interviews with him and he’s got the same accent as me! It’s so inspiring, that is,” he adds.

There is a patchwork element in a way, but was always going to be a coherence.

“It’s not going to be Prince one minute, Napalm Death the next. It is us, it is me!”

The common non-human bond throughout the 10 songs is the unmistakable sixth member of KEYS, for this release anyway, in the form of the humble 4 track tape recorder. Commonplace once upon a time in many a teenage bedroom and student or DHSS bedsit, the 4 track tape recorder has been snubbed since recording software on a laptop reached scary levels of sophistication and ease of use. And yet, the 4 track retains a specialness, an innocence and romance about it, affections for such basic technology opening up possibilities, democratizing the recording process, widening it right out.

For Matthew, his use of the 4 track here in 2020 is something he describes as “unfinished business“.

“I really got into 4 track recording when I was a late teen and I always loved the sound of them but listeners expectations back then, the hiss, we were always trying to combat that so it never went further than demo. I was convinced they had a lovely sound to them, a warmth, a wooziness. I find a lot of digital recordings a bit too pristine.” 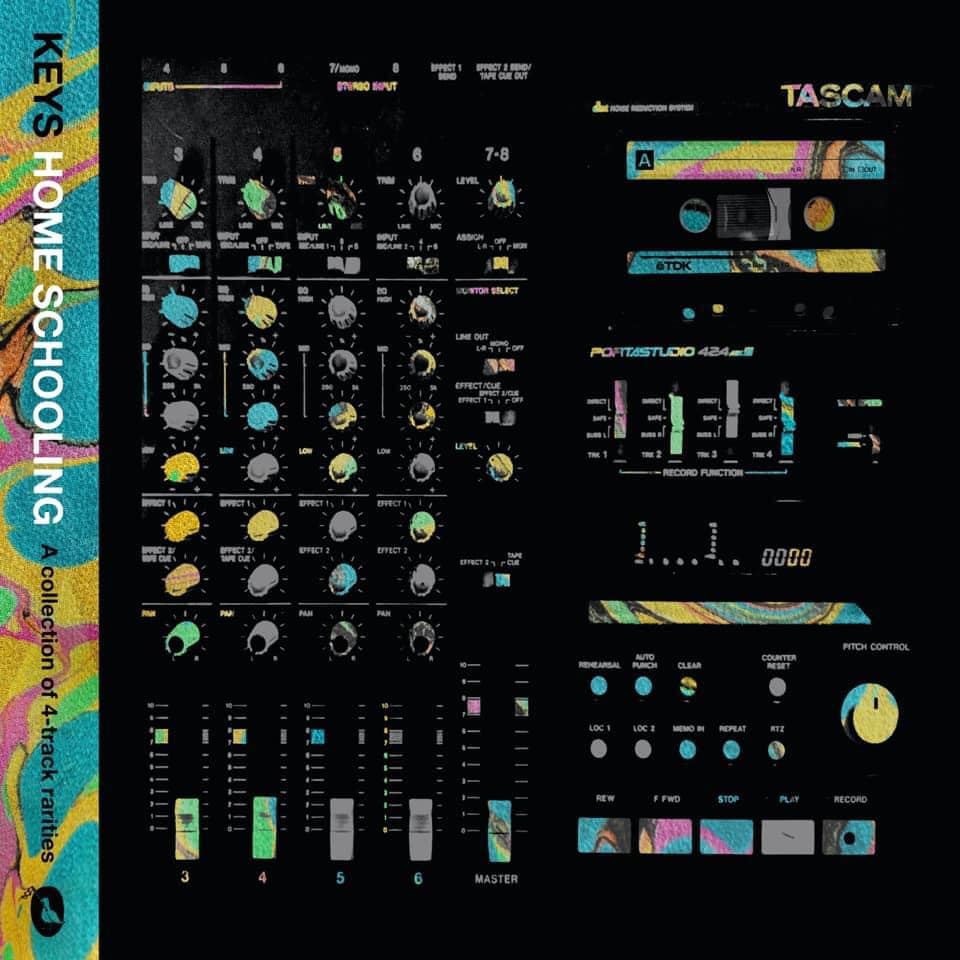 Throughout Home Schooling we get that delicious, unmistakable sound of tape hiss, bringing with it the image of gently turning spools. Way back when, eradicating the hiss was the big worry, but Matthew’s contemporary embracing the familiar comforting sound, was a valuable element in making this album.

“The expectation now of the listener is different. The hiss now is not the issue it used to be. You can use it in away because it moves with the music. Every time the bass drum hits, the hiss goes away so you get this sound. It becomes a rhythmic thing, and it eats up the high frequencies and so everything has a darker tone to it. The high frequencies picked up by the microphone, that’s usually the reflections of the room. They are all eaten up by the hiss and so what you get from the recording then is the really close warmer sound. It’s more intimate,” he explains.

The other reason for this recording method is more practical, and out of necessity. He’s not great at technology, and 4 track skills are never forgotten.  He sent demos of songs to KEYS’ drummer Davey Newington, also of Boy Azooga.

“He said ‘oh I love those covers you’ve done. Is that a Jeff Lynn song, is that a Bad Finger song’. That’s an amazing compliment so I thought ok, you need to get your face mask on and haul you arse over here, we’re on to something with this 4 track.”

The album was birthed in the home and domesticity has been a part of its creation. Recorded during the daytime, tea towels were put on the snares and pillows used to keep the sound within the confines of the four walls. Physical and practical limits have been turned into a positive.

The melody for the song ‘Home Schooling‘ popped into his head whilst he was brushing the floor, and features Matthew’s daughters.  Has he never heard of the adage, never work with children and animals?

“I just dragged them in, it was my turn to do home schooling, my wife and I were sharing. It was, ‘today kids we’re going to do some music!’”

The songs were created in the bedroom from initial writing onwards, another echo of the time learning his songwriting chops. KEYS are ordinarily a projecting, emotive psych – pop and rock n roll band, with this it was less “can I take this song to the rehearsal room with the other boys in the band, will we get off on this with a good riff or something” and more just the writing process with the guitar again.

“The guitar is so tactile it’s different from a piano. The guitar you hug it close to your soul, close to your heart and you sing into this hole in the guitar, it’s very confessional.”

Talking about it more, he confesses to the idea of ‘Home Schooling’ unconsciously adding to the British slant on lo-fi. A lot of American artists are embracing the vibe right now, like John Maus, and Daniel Johnson. Matthew’s been enjoying Aerial Pink’s album Dedicated to Bobby Jameson.

“The sound of is his records, the palette, I find quite delightful. He’s too easily dismissed as an oddball.”

We should all embrace our inner oddball, does he not think?

“We should all aspire to become ourselves more, the odd version of ourselves. It’s his uniqueness and singularity I find inspiring.”

Ultimately though, the making of Home Schooling made Matthew reassess his whole approach to making, creating.

“It was so easy,” he says, “after all these years of going to studios, to lock into that bedroom way of writing and recording again.”

Matthew has compiled a playlist of songs which inspired the album specially for God Is In The TV here:

‘HOME SCHOOLING’: A Collection of 4-Track Rarities’ is out now on all major streaming platforms, and on CD and cassette next month via Libertino Records.