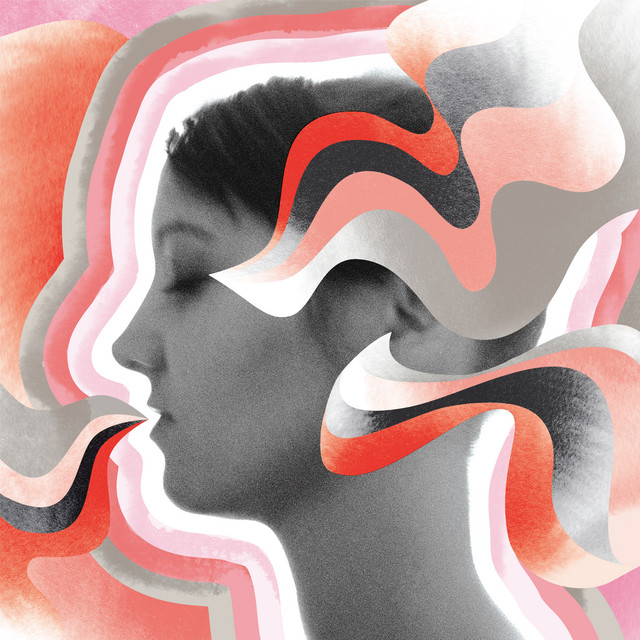 Kreuzberg, a district of Berlin, is a worrying contradiction. It’s both an amazing and terrible place to dwell in. Because it has a notoriously pioneering music scene (1970’s punk rock followed later by rap and breakdance) and an annual festival of culture, it’s an inspiring place to be for creative people. On the flip side it’s one of the poorest, most unemployed areas in Germany’s capital, with very low incomes. Expat Sophie Hunger currently lives in this area and having been born in the capital of Switzerland instead, she can see it from a different perspective. The Swiss musician 7th album Halluzinationen takes listeners to her new hometown, meeting some of its residents, and portraying what it’s possibly like to live in such a place. A place that’s easy to hallucinate in, as she slides between loneliness and paranoiac imagination. An intense, fun and murky ride to travel.

Mystical opener ‘Liquid Air’ introduces both the neighbourhood of Kreuzberg and the trippy atmosphere that’s present in most of Halluzinationen. “You could only enter if you passed an alcohol test indicating a blood alcohol level of more than 0.2 percent. I used to go there during the weeks in which I wrote Hallucinations. The air seemed liquid,” said Sophie Hunger an interview as she describes a really dodgy illegal oyster bar that she and her friend Magdalena – whom also features later in the record – frequently went to. As a result of the odd entry requirements, they were excessively drunk on arrival and the track reflects the skewed perception of reality when intoxicated: “I’ll take a hit of anything, your stretched cocaine, your acid wine, your lip-stick.”

As the song progresses, more production techniques are used including the spinning of bike wheels, as well as ghostly vocals, backmasking and a screeching sound, techniques used on many occasions on the Sophie Hunger’s latest LP Halluzinationen but also adopted by Agnes Obel – the Dane who’s also a foreigner living in Berlin. Obel’s influence is also felt on the dark shaded piano moments – also reminiscent of iamthemorning during their most gothic – with a good example of the style being on ‘Bad Medication’. An effective combination of French pianist Alexis Anerilles‘ piano and Japanese synthesizer programmer Hinako Omori.

It’s quite a multi-cultural album when you also consider 3 of the tracks are also in German (the title track, as well as ‘Finde Mich’ and the malicious fairytale story ‘Rote Beeten aus Arsen’). “I’m physical changing / I can’t be patient, I am a patient. After the sickness, after the withdrawal. Don’t forget to love me after all/ Pointless confessions, there will be sessions.”If this track sounds as if she is stuck in the same mental health centre as Jenny Hval in 2019’s The Practice Of Love, ‘Security Check’ is an even worse scenario for Sophie Hunger to be losing her sanity.

Recalling Jason Mraz’s ‘Plane’ and Charlotte Gainsbourg’s ‘AF607105′, the track follows the procedures before and during a flight. As she struggles to remind calm. “Put your tooth paste and my shoes in a separate box, little do they know about the monkeys in my head / Feeling your hands as you pat me down, there’s nothing safe about me now,” she sings as Hinako Omori’s electronics grow increasingly spacey and out-of-this-world.

The sugary giddiness and message on ‘Everything Is Good’ – which sounds like it was produced whilst eating Skittles – initially sounds out of a place on an album that’s otherwise darker and pensive. However, in the context of Halluzinationen, this could be Sophie Hunger taking happy pills. She’s seen a famous David Shrigley three-thumbs-up illustration on a mug – of which the track is named after – and has suddenly become an eternal optimist. Although it could be sarcasm or a pep talk after a panic attack: “I ran to the Olympics I showed the finish line I came last
So everything is fine, everything is fine.”

One of the most best tracks on Hunger’s new album is undoubtedly ‘Maria Magdalena’. Beautifully written and with jazz-drums, lounge piano and subtle effects such as water drops and a swirling spectral echoes, Sophie Hunger wonderfully interplays the subject of a local sex worker friend (“Your teeth, your neck, you wash my feet / How much does that cost?”) and the biblical story of Mary Magdalene (“Sing me a new holy scripture, it flows your soul. Don’t save Jesus.”)

Sophie Hunger and producer Dan Carey (who also produced her previous record Molecules) employed a hazardous live record technique on Halluzinationen and it pays off. Recorded at Abbey Road Studios – Hunger is not particularly known in the UK but sort of a national treasure in her home country with her last 5 albums being top 2 in Switzerland, so performing at such as a prestigious studio is not too unexpected – the record was a made in continuous takes, which is noticeable because tracks blend into each other seamlessly and the aim to not make mistakes adds further apt anxiety to what is already apprehensive lyrics.

And the anxiety could transfer to the listener after the album ends, as the last track features lines such as “if there’s a place to bury strangers, bury me tonight. Hotels, empty parlours; I can hold the requiem if you’d like.” Or perhaps this is just the overactive imagination of a resident living in an identity-contradicting location such as Kreuzberg.