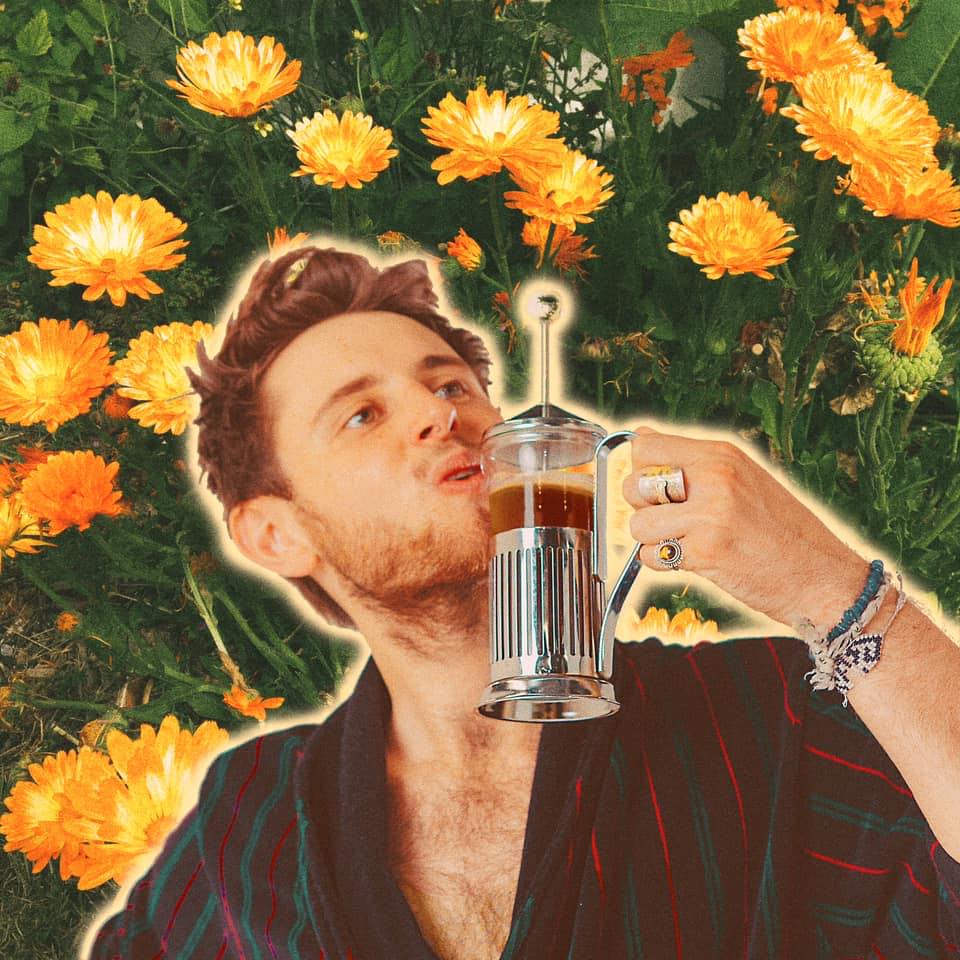 Following support slots for the likes of Michael Kiwanuka and Joel Baker, the work of Sonny Winnebago aka Harvey Jones shone into a wider consciousness this time last year, through singles recorded with the support of Welsh artist development scheme the Forté Project.

With melody and a sweetness at their core, the Welsh-Australian singer-songwriter and musician confesses his songs readily take guidance from artists from way back, Harry Nilsson and Cat Stevens being two immediate reference points.

The quality of those initial recordings produced by Charlie Francis (R.E.M, The High Llamas), and featuring Davey Newington (Boy Azooga), Matt Evans (KEYS) and Steve Black (Sweet Baboo) set the scene for what we’re to expect  in the future.

The latest of the recordings to come out, ‘Lemonade‘, is a personal favourite at this end. Featuring Jones’ flute in lieu of Black’s clarinet, with Francis contributing Wurlitzer for extra trippy fun, ‘Lemonade’ is an absolute bop. Retaining cheeky winks and magic beans, it’s mischievous but never daft, hitting the sugar rush sweet spot with no dizzy aftereffects. Harvey’s smooth distinctive croon keeps proceedings grounded.

Harvey wrote ‘Lemonade‘ when working in a coffee shop in London, on a bright sunny day. Listening to it, we feel the warmth of the sun on our faces, high and happy up in a clear blue sky. We see the kids selling homemade pop in the street that morning, and taste four expressos to kickstart the working day, and the hey presto as ‘Lemonade‘ the song was born in his break.

‘I was talking to customers, there wasn’t any time to ponder. It was very much absorb all those nice sunny energetic experiences then regurgitate them out onto a guitar,’ Harvey explains, from his new home of four days standing in Cardiff, having moved there from Porthcawl.

Like any fine songwriter, he finds connections and logics in the space and world around him, imagined and real, essentially interlinked. ‘Lemonade‘ is the second single with his new label Phwoar and Peace, also based in Cardiff, and even that he has linked up a chain, weaving together a little magical tale.

‘His name is Ray like sunshine, his last name’s Thomas,’ he says of the label. ‘And I always think, Thomas the Tank Engine. He’s a tank engine, I’m a Winnebago. I haven’t told him that yet it’s an interesting link that hit me…’

All part of being a lyricist, noticing things and making them bloom?

‘I like that. Everything can look so mundane, but you got to make ‘em bloom, I guess. Like with art and painting just perspective isn’t it, or else everything is mundane.’

The term troubadour is often used to described Harvey, even music teachers in school labeling him so (‘I used to walk around with a guitar like that annoying kid in class,’ he admits) and the travelling musician trope is a logical one in literal ways. He’s lived in Wales – Australia – Wales – Surrey – London and Wales again. How have the different places – and indeed weather systems – shifted and shaped his songwriting?

‘It’s hard to know because I haven’t experienced the other side of it. You do what you do, I guess in subtle ways it helps you have a rounder perspective on things, I find it interesting a lot of musicians need to travel around to get their inspiration. George Ezra is big into that, his whole concept it travelling to get experiences to write about.

I don’t think that’s true, I’ve seen a lot of musicians complain about coronavirus and how they can’t write music at the moment, for some reason they think they can’t have any experiences but that is an experience in itself. Without being pretentious, being in your head is where all the magic creativity stuff happens.

You can write about the absence of things as opposed to the doing and discovery of things. It’s helped me realize I don’t need to travel and go outside to be able to write. When I lived by the sea I wrote about the sea but once I got into uni which was Surrey, I felt super landlocked. My writing started getting more terrestrial.

Having that contrast of living by the sea then coming more inland and being around forests and hills and allotments really helped me create the Sonny Winnebago thing the imagery of gardens, flowers, it comes an inland place.   Whereas everything before was more atmospheric and seaside-y, if that make sense. Now I’m a lot more grounded, even the sound I’m going for is quite earthy.’

He wrote six or seven songs during lockdown, lyrically more introspective than previous.

‘I’m sure that now I’ve started skating I’m going to get a lot of songs out of that. Probably not about skateboarding just not being attached to anything. This is the troubadour thing, being the observer going past observing but not really being involved.’

When his voice is described as nice, how does he feel? Nice isn’t something a young man wants to be described as, surely?

‘I love it! I’m good with compliments. I try to absorb them as much as I can.’

One thing that has not changed over his time as a songwriter is his good friend Peanut. Peanut is a £25 acoustic guitar bought from a London charity shop and so called because it’s in the shape of a peanut, of course. He has written most of his songs on Peanut, this nylon string guitar that used to belong to a little girl, garlanded as it was with pink stickers.

‘The strings are really loose, I haven’t changed them for years. It’s really helped me develop a style. On Lemonade I’m slapping the body and it’s helped me develop that style of percussive, rhythmic playing. I’m not concerned about breaking a string. It’s helped me let loose a bit. I love Peanut very much! It’s very friendly!’

‘Lemonade’ is out now on all respectable streaming platforms. Sonny Winnebago plays FOCUS Wales’ online Out Of Focus next week.