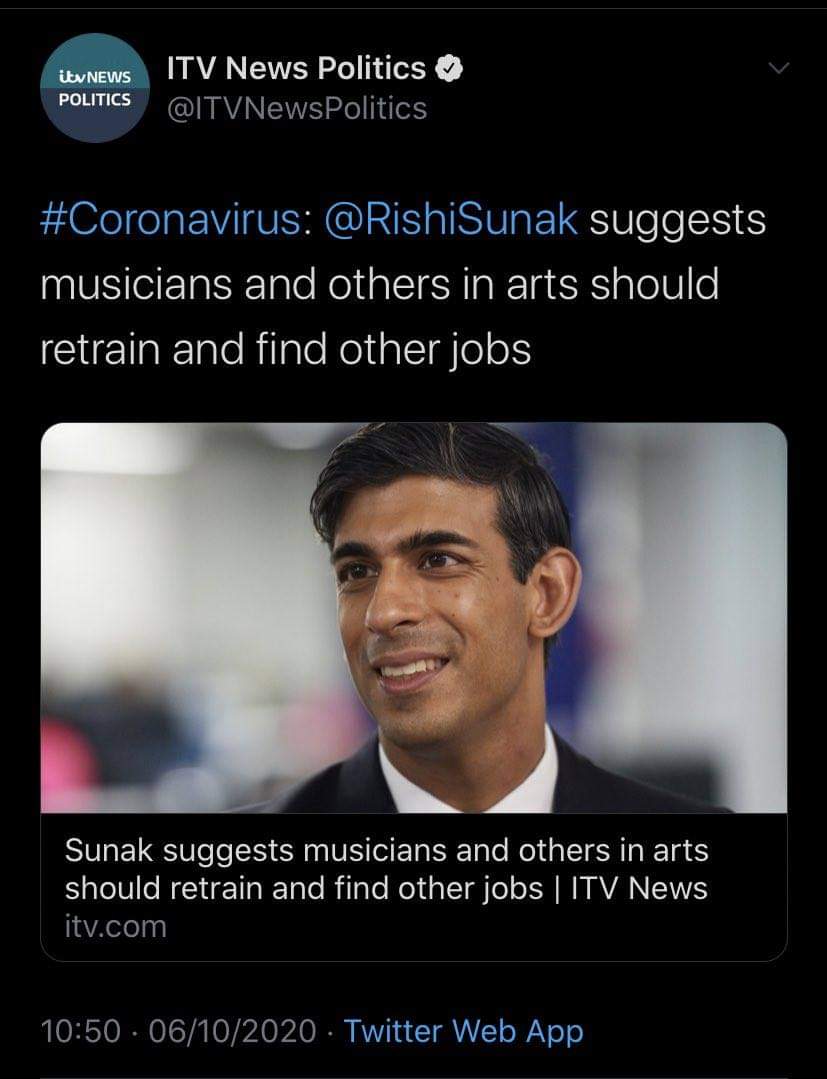 Chancellor Rishi Sunak‘s reported words this week that musicians and those working in the arts should “adapt” and “retrain” in the face of restrictions and threats to livelihoods posed by the COVID-19 pandemic, were crass and utterly heartless. The cultural industry is one of the fastest growing sectors of the economy, one that delivers 5.2 billion to the exchequer each year, and although he claimed the orginal ITV headline(pictured above) was misleading and that he wasn’t referring to just musicians and cultural workers but workers in the economy as a whole, his actions tell a different story. Their new self employment scheme and the use of words like ‘unviable’ regards to venues and other business hit by a pandemic through not fault of their own is more telling.

Sunak told ITV News: “I can’t pretend that everyone can do exactly the same job that they were doing at the beginning of this crisis. That’s why we’ve put a lot of resource into trying to create new opportunities”.

It’s not up to Rishi Sunak whether musicians should retrain, or whether the “arts” and “music” are “viable”??!! Musicians, artists, freelance cultural workers have constantly been adapting to new realities and a broken and changing systems for many years. As Welsh producer and musician David Wrench put it on Twitter “Can you imagine the uproar if the chancellor said that fishermen had to retrain? Yet music alone (never mind the rest of arts) brings in far far more money to the UK economy than fishing does, but he’s happy to throw our entire industry under a bus.”

The shut down of live music venues and festivals until 2021 due to the COVID-19 pandemic is yet another challenge and threat that I am confident artists and those in the cultural industries can overcome and adapt too, many artists and those that work in the arts like me already work second or third jobs and make financial sacrifices to follow their passions. Many talented and passionate freelancers I know work really hard and are shifting to working from home. Not everyone has a background that can sustain their pursuits.

The artist Kelly Lee Owens argued “I actually worked 45 hours a week elsewhere for years whilst making music, and was still part-time up until 2 yrs ago – this industry is already hard enough for people who don’t have rich parents.”

Sunak is clearly implying with his language that that a job in the arts, music or culture is less worthy or “viable” than other kinds of work, when providing art and music and helping that industry to grow is vital to the soul of the nation and always has been.

This depressing situation is hopefully a temporary situation not a choice. The economy may be shifting where more people may have to work from home when this is over, but that doesn’t mean that arts and culture is unsustainable long term.

Labour MP Kevin Brennan tweeted: “Rishi Sunak is becoming the Aunt Mimi of the Government – she told John Lennon he should get a ‘proper job’ – unbelievable that the Chancellor thinks that the creative sector workers – who work in the fastest growing sector of the economy – need to find other careers”

There has always been the understanding that the Conservatives are ignorant of culture at best and distrustful of it at worst. And no I don’t believe Boris Johnson has read the lyrics for The Jam‘s ‘Eaton Rifles’ when he claims they are one of his favourite bands. Matt Hancock’s catastrophicaly bad Partridge like turn on the mic for a spot of Queen karaoke, is the hilarously awkward squirming representation of how the Tories approach popular music.

The implication from the Tories again is that culture isn’t as important as a job in the City, when the bankers needed bailing out during the banking crash of 2008 were they told to retrain? Paul Pacifico tweeted “No matter how much money music generates for the U.K. economy, it just feels like we are not taken seriously enough as a commercial sector by Rishi Sunak and the current government. Fossil fuel and heavy industries line up for massive subsidies over decades and we are told.”

Venues are struggling through no fault of their own, many people have already lost their jobs in the arts and venues have sadly been lost. We must try to support the venues we have left, they are viable.

Confusing messages and laws from the Conservative government as we reopened and then saw local lockdowns reimposed, along with the lack of a proper track and trace system have made it more difficult.

They have outsourced it to a private company that has not delivered and relied on an outdated Excel spreadsheet that lost thousands of tests. The 10pm curfew has not helped the situation restricting live venues and nightclubs capabilities to trade, with scenes of many people spilling onto the street in London and Liverpool at the same time, social distancing out of the window, and there has heen an uptick in infections.

The Royal Ballet and institutions with big backing will survive but what about our grassroots venues? Still there is no plan for how and when venues can open, whilst pubs have found a way and sitting in an enclosed space like an aeroplane for hours is considered viable, so who decides?

We know not every job and venue can be saved, people are already losing their jobs, spaces are already shutting their doors, indeed according to a recent report many musicians are already considering quitting music because of a lack of money without the live circuit.

But we need to support the venues that are crucial to communities during this difficult time until the point where they can reopen safely. In Germany and France they have vowed to support vulnerable industries for up to 24 months. We need a plan for how venues can sustain themselves into next year and then reopen Covid safe. We need to support the self employed, many of whom are brilliant minds doing good work. The latest remarks from the Chancellor are a kick in the teeth when they need help to adapt and as a bridge to a better model of work and systems that value this work better, see the Broken Record campaign for ideas.

The government has repeatedly trumpeted its £1.57 billion for the cultural and heritage industries. But this won’t go nearly far enough, already the website for grants stopped people logging on after only a few hours. In England, money will be distributed to music and creative businesses via Arts Council England’s Cultural Recovery Fund. News on who will benefit from that – originally expected on Monday – will now emerge next week. Many freelancers have been left on the scrap heap by this callous government with Sunak’ jobs protection scheme only protecting those who can work 30% of their hours. Freelance musicians, who make up 72% of the sector, are particularly affected. Almost half of them are not eligible for grants under the government’s current self-employed income support scheme, the Musicians Union says.

A protest from classical musicians took place in Westminster this week. Events were organised by the Let Music Live campaign, and supported by the Musicians Union, which represents more than 32,000 performers in the UK. It says 70% of its members have lost more than three-quarters of their regular work during the lockdown, leaving many in financial hardship.

Robert Peacock tweeted: “What “new opportunities”? Modern work if you can find it often means bullshit jobs that barely cover living expenses. And that was true pre-COVID. We need a radical solution and probably some form of Universal Basic Income.”

Culture is vital, try to go a week without watching television, listening to music, the internet is built on music and culture produced by the same musicians and artists that are being patronised and left to struggle. Not every musician or artist even creates for economic reasons but to express themselves and offer an escape and joy to others. How can we measure the worth of music and art?

Culture has always been the lifeblood of this country, without it Britain would be a much lesser place. Culture and music is a huge export for the UK considering our size as a population, Britain out performs in the arts and music and the government should be supporting the arts. During lockdown the value of music has only been amplified for me, once again the arts and culture has made me feel less alone. Netflix, music, podcasts, live streams, and reading have all provided a lifeline to me and many others as they were isolated and cut off from loved ones.

As my friend Mark @iamjurassicmark put it on twitter:

“A world with no art. No music. Just pure, beautiful profit. That’s what they want. Workers toiling for food. Not art. Not beauty.”

We must protect arts and culture from this attack from a government using the pandemic as cover for yet more cultural warfare and downgrading of artists, actors and musicians who are on the whole anti establishment. Its also an attempt one might suggest to help property developers to make money from gentrification and redevelopment as they pick off venues, theatres, and arts spaces that have had to close.

We cannot let it happen, we must not stand for it, we must use our voices to speak out. Music and the arts are not just “viable” they are “vital”.