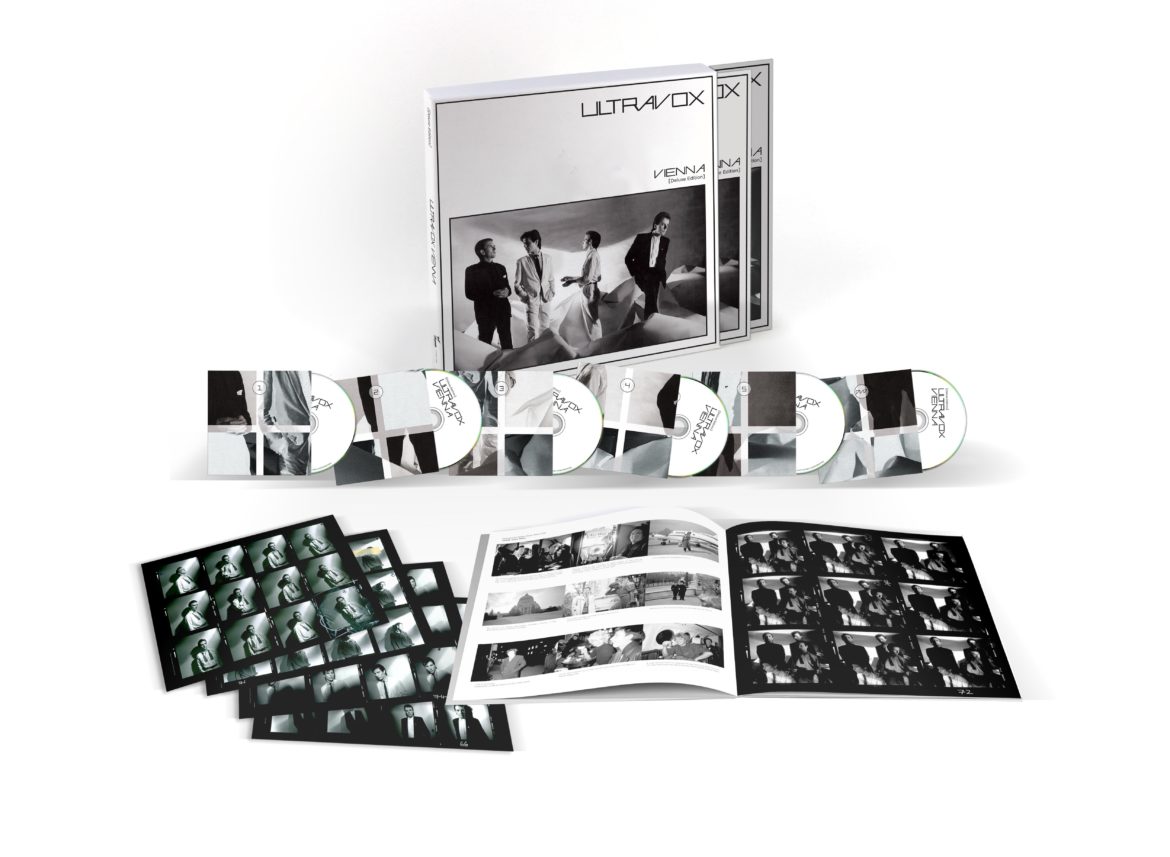 Does anyone remember the 21st of February 1981? The day the crime of the century occurred, a crime that would send shudders through the music industry. One that was even more blatant than the Great Train Robbery in 1963, that would steal even more than the Brix Mat Robbery twenty years later, yet even more entertaining than the Italian Job in 1969. On the 21st of February 1981 Joe Dolce’s Music Theatre with ‘Shaddap Up You Face’ was to stop Ultravox‘s Vienna from reaching its true place at the top of the UK singles charts for the second week. The week before John Lennon‘s ‘Woman’ had kept it from doing so, but an ex-Beatle can surely justify this, and I may have played a small part in that as I remember buying this single. As an album, this was their fourth long-player, although was the first for new singer/songwriter Midge Ure, a relationship that would see a very productive future for the band.

Ultravox had served a long period of gestation, several name changes and different artists had passed through their gates. I found it extremely amusing to learn that between 1974-1976 an original incarnation, Tiger Lily had taken the name The Damned, for a few weeks, before learning that this was being used (Yes, from the band heralded as releasing the first British punk-rock single ‘New Rose’), but now having the benefit of time and the internet at our disposal it’s easy to scoff. Ultravox! was another moniker briefly used, but in 1978 had emerged, almost fully formed, as simply Ultravox. The brilliantly titled Systems of Romance was released on the Island Records label later that year, (a fine album too and suggested they were heading in the right direction). Their 3rd album, this was produced by Conny Plank, a producer responsible for work with German bands Kraftwerk & NEU! and brought a very European leaning to the presentation, although post-punk was still on display. It was original member and lead vocalist John Foxx who had fronted the band but that album was to be his last, later going on to pursue solo projects. For a short time it wasn’t clear that the band would continue, until former Rich Kids vocalist Midge Ure was asked to join by the band’s keyboard/synthesiser musician Billy Currie, following their working with the then studio-based project Visage. This might be considered a coup, as Ure filled the shoes of both Foxx and guitarist Robin Simons after he left the group, and finally, after such a long time finding their way, the butterfly was set to emerge, Vienna being the result.

Vienna is an album that now sees it’s 40th Anniversary release on Chrysalis Records and was an album that saw the band hold onto their production relationship with Plank, providing this work with an even greater European-slant. As a child, I remember seeing this released and with this 40th Anniversary issue, it does serve as a gauge of the passing of time, yet still, this album sounds as fresh today as it did when it was first offered to its baying audience. Recorded at RAK Studios, Ure’s offering both showed a vocal presence and cutting edge guitar, that stood head and shoulders above their earlier work and it and saw the album progress worldwide, becoming top 10 in seven countries, with the title single selling half a million copies in the UK alone. Opening with the somewhat pretentiously titled ‘Astradyne’, it latched onto the movement that was already growing in not just the UK, that of the New Romantic, and this album, with its electronic backing, was ripe to take this scene by the hand. On this occasion, the album’s mid-track ‘Sleepwalk’ has already seen a 12″ reissue, on Record Store Day, earlier this year, but it’s the title track ‘Vienna’ that shines.

This time the album has been released as an expanded edition; you will be able to buy a full 6 disc (5 CD & 1 DVD) issue, which adds to a remastered 9 track version of the original release, a second disc which features producer Steve Wilson (musician/singer/songwriter, also responsible for the production duties of band’s such as Porcupine Tree). This 13 track expanded version, features 4 B-sides on an album almost unrecognisable from its original, the production adding a spit & shine to the original mix. If I’m honest though I prefer the production master obtained on Disc 1. Disc 3 is a 15 track disc of singles, B-sides, remixes, rarities & live versions. Some of these display the fun that must’ve been had in these early days of the 1980s. Sound production is something that stands out and with a pair of headphones, exhibits just what could be done when it comes to producing a track. I felt like I was standing listening to a band performing right there in front of me and when it came to the single version of ‘Vienna’ I was transported 40 years back in time, watching the video on Top of the Pops, on my parents’ 21″ colour TV, but the audio was never this good.

Something that was touched upon on the previous disc was the band’s rehearsals for this album, but there were only 3 tracks that fell into this category and if you felt still wanting, then you won’t be disappointed. Disc 4 is a compendium of cassette versions, recorded during rehearsals and these too stand out, this time perhaps not in terms of the audio staging, but like taking an old car for a spin, they have something of the classic about them. Tape-hiss is barely present, I guess thanks to professional noise reduction of the day, but it is clear sound levels sometimes struggle to cope with all that is being thrown at the recording, although never exceeding what is available. The analogue instruments; guitar and drums possess a charm, I felt almost as if I were in the studio. The space available to the musicians was clear, as drummer Warren Can counts in the timing on his sticks, allowing Midge to sing the introduction on ‘Sleepwalk’, his breath so close to his mic you can hear him breathe. The kick-drum that is very close to the levels on ‘Vienna’, as Midge’s vocal hits that high note. What sounds like a flip-bin at 4 seconds on the recording of ‘All Stood Still’, can be heard and the instruction between band members as they set about performing ‘Animal’. I suggest this might have many entertained the same way, as this insight into the recording process may be considered the high point on this reissued set.

So that was disc four, but the fun is not over. Disc 5 includes a recording made during a show in St Albans in 1980. Although the band had already recorded for some time before the release of Vienna, this does feature tracks the band had recorded sometime before and this, for me, is where it got interesting. Numbers like the John Foxx penned ‘Hiroshima Mon Amour’ and a version of Brian Eno‘s 1977 ‘Kings Lead Hat’, unsurprisingly recorded by a band I’m sure had taken their lead from Eno in places. The final Disc, 6 is a DVD not of video, but high-end audio, for the audiophiles among us. I consider myself interested, it’s just when it comes to the setting up of multiple speakers that it puts me off. These days it’s a decent set of headphones I find more absorbing. This is one of the best reissued collections I have experienced lately and as well as the CD/DVD version, this also comes as a 4 LP clear vinyl, which includes a half-speed master, as well as a double black vinyl version. Both of these vinyl releases feature the St. Albans recording. Although I love my vinyl, I would say that on this occasion the compilers have done this set so well, the CD/DVD has to take the lead. Disc 4 is my preference, although is short on vocal and different listening environments do change the experience, this is just a great set. A set not just for those interested in the early stages of electronica, but Ultravox were a New Wave band at heart, who found a synthesiser along the way, making some of the best compositions during their time.