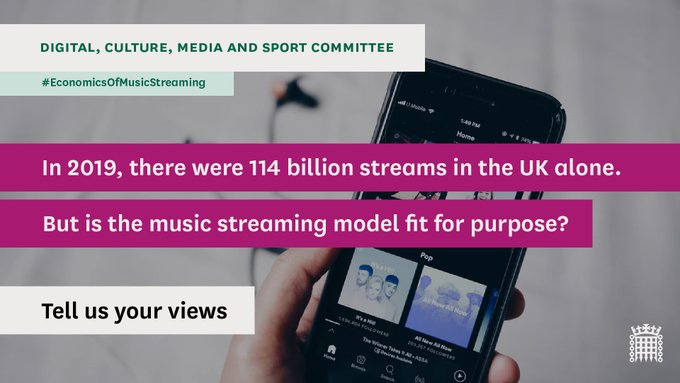 Yesterday it was announced that a parliamentary inquiry will be launched into the impact that music streaming is having on artists, record labels and the sustainability of the music industry. The Digital, Culture, Media and Sport select committee will look at the business models of major streaming companies like Spotify, Apple Music, Amazon Music, Tidal and Google Play determining the fairness of streaming revenues for the writers and performers whose music fills the platforms.

Committee chair, MP Julian Knight, said it would look at how: “Algorithms might benefit platforms in maximising income from streaming but they are a blunt tool to operate in a creative industry with emerging talent risking failing the first hurdle.

“We’re asking whether the business models used by major streaming platforms are fair to the writers and performers who provide the material,” she continued, perhaps referring to the major artists like Ed Sheeran, Drake and Adele who dominate the platform, and the dominance of three major labels

“Longer-term we’re looking at whether the economics of streaming could in future limit the range of artists and music that we’re all able to enjoy today.”

“Music streaming in the UK brings in more than £1bn a year in revenue. But artists can be paid as little as 13% of the income generated,” said a statement.

Spotify is thought to pay between £0.002 and £0.0038 per stream. Apple Music pays about £0.0059. Spotify CEO Daniel Ek angered musicians earlier this year when he talked about “continuous content” creation, and I argued the platform had to change.

Musician Tom Gray launched the #BrokenRecord campaign on twitter in the Spring, calling for a government inquiry into streaming. He told us: “We’ve been asking for this since April. There is much about the streaming system that beggars belief. The investigation in parliament is a huge opportunity to shine a light and instruct legislators that intervention may be necessary. Creators everywhere should be preparing and submitting evidence now.” 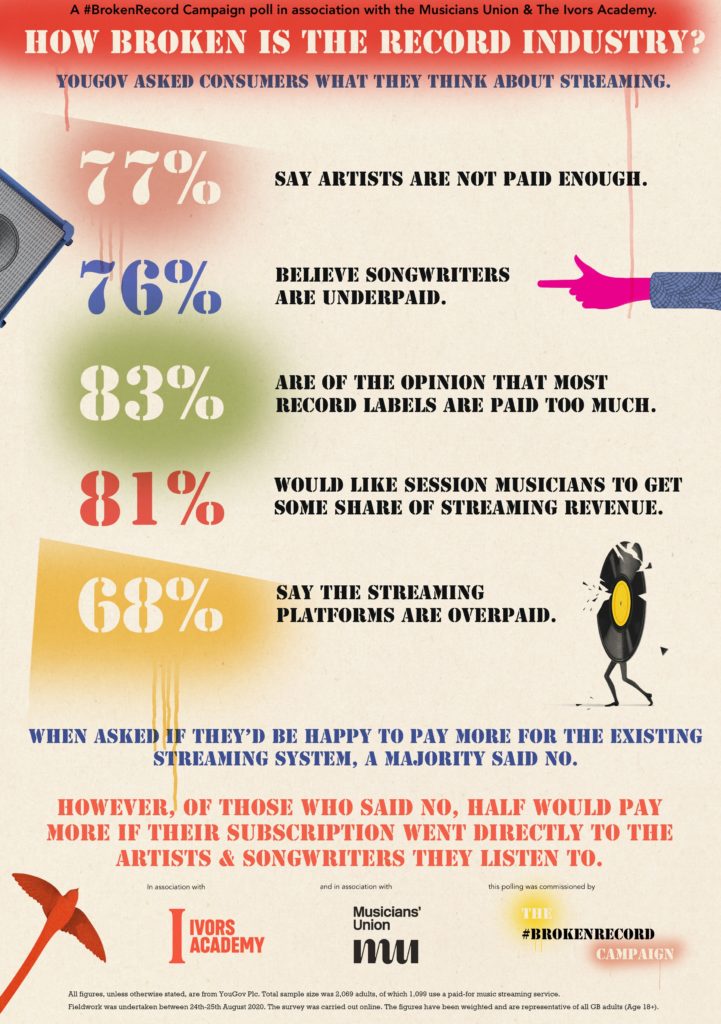 A YouGov survey commissioned by the campaign found this week, found that 77% of consumers believed that streaming services underpaid artists and 68% believed streaming platforms are overpaid. A majority of respondents said that they would not want to pay more for their existing streaming services – which cost around £10 per month – but half of that majority said they would pay more if their subscription directly benefited the artists and songwriters they listen to.

This user centric model is one advocated by campaigners, some labels and musicians as well as a increase in revenue share from streams for musicians. Earlier this year Spotify announced a “tip jar” on artists pages which was heavily criticised as an admission that streaming doesn’t pay well enough, at the same time Bandcamp gained popularity for its free fee waiver Fridays, where each month artists would receive all the profits from sales of merch and downloads.

The committee’s session is expected to be held in November. MPs are asking for written submissions from industry experts, artists, labels and streaming platforms to address the dominant business models of streaming platforms, the influence of algorithmic curation on consumer habits and the long-term economic impact of these models.

The inquiry also seeks to look into whether the government can protect the industry from “knock-on effects” stemming from these models, “such as the increased piracy of music”. General digital media piracy – related to music, films and gaming – which has reportedly increased during global coronavirus lockdowns since the spring.

The committee will look into potential alternative business models, and whether policy can favour more equitable models, and weigh up the benefits of a UK equivalent to the EU copyright directive, which holds sites such as YouTube responsible if users upload protected content.

The Musicians’ Union has also argued that some streaming revenues should go to backing musicians, who receive no royalties under the current system.

“Backing musicians are usually paid a small upfront fee for playing on a track, but it is often royalty payments that keep them going,” said the union’s deputy secretary general, Naomi Pohl.

“Streaming doesn’t pay any royalties to these musicians, but we argue that it should; if services seek to cannibalise other listening media such as radio, then they should pay an equivalent royalty.”

“Most creators cannot make a living from streaming, it simply does not pay enough,” added Graham Davies, CEO of The Ivors Academy.

He said the inquiry presented “an opportunity to create a transparent, fair and equitable approach” that benefits “all parts of the music industry”.

Whatever comes of the iniqury its a positive development for the Broken Record campaign highlighting the inequalities of the current streaming models, and amplifies the discussion within the industry.