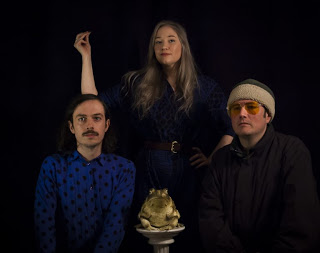 Order of the Toad returned with their second album Re-Order of the Toad at the start of October via independent labels Gringo Records and Reckless Yes. Today we unveil their charming new animated video for the closing track on the record ‘Cruise Control’ directed by Iain McCall, watch it below.

Woven with Gemma Fleet of The Wharves strident vocals and with Robert Sotelo in the band, Order of the Toad craft an eclectic sound swirling psychedelic jangle pop, Baroque, ’70s folk into a delicious soup of tuneful songs. ‘Cruise Control’ documents coping with anxiety every day, helping those around us on the way, travelling towards the light at the end of a dark tunnel.

Quote from Gemma about the song: “The song Cruise Control is about managing anxiety whilst being constantly busy. The battle many of us go through to try and keep on an even keel, keep demons at bay and the processes the enable you to keep going and running at ‘cruise control’. The video by Iain McCall is a great fit because whilst we are all trying to figure out our own balance, we need to remember to go back and help other people on their journey.”

Formed of Gemma Fleet (The Wharves), Robert Sotelo (Upset the Rhythm), and Christopher Taylor the band are quite unlike anything else around. Order of the Toad sit somewhere between Baroque and Psyche, with touches of Country and Pop thrown in too. It makes for a rich soundscape full of surprises and delights.