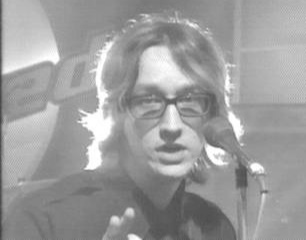 It’s one thing to have to write about a much loved musician that had been successful for decades and had passed away in their 70s or 80s after a short illness.

But it’s another to have to write about a man who was only just fifty but had been diagnosed with bowel cancer just this year.

James Broad was the continuing mastermind of the band Silver Sun that turned up in the nineties with two LPs of solid gold pop rock hits. There were diminishing frequency of returns in the last twenty years but sixth LP ‘Switzerland‘ was released at the beginning of lockdown and was a massive return to form.

James Broad, Richard Kane, Richard Sayce & Paul Smith were Silver Sun from 1995 and theoretically until now. Whilst for the last few decades James was mainly still writing and recording as Silver Sun alone, the band as a whole never split up, several members appeared on the most recent LP, and they also got together and played a number of support slots for Sleeper in 2017 and a Starshaped club night in London in the intervening years.

Forming around North London in the mid 90’s, Silver Sun were on the peripheries of the Britpop movement but their sound owed much more to West Coast U.S.A, surf rock, The Beach Boys and a harder rock sound than the others that lived in The Good Mixer and pubs of the area. I first saw them at Brighton Essential Festival in May 1997 shortly after the release of their debut eponymous masterpiece. 15 tracks of riotous summer anthems, bizarre and often random lyrics but intoxicating melody and pop hooks on the likes of singles ‘Golden Skin’, ‘Lava’, ‘Julia‘ as well as ‘Far Out’, ‘Last Day’, ‘Nobody’ and ‘Animals Feet’.

In 1998 they quickly followed it up with Neo Wave and despite James subsequently not being quite so happy with its rushed completion and release it was still jam packed full of epic pop tunes such as ‘I’ll See You Around’, ‘Would’ve If I Could’ve’, ‘Special Powers’ and their only top 20 chart hit, ‘Too Much, Too Little, Too Late’, a cover of the Johnny Mathis seventies hit.

Despite relative success, Polydor dropped them a year later and it took until 2005 for the third Silver Sun record, Disappear Here, to appear, mainly due to them all having full time jobs and James being the only member actively writing and recording it.

Subsequent albums, Dad’s Weird Dream from 2006 which all members participated in, and 2013’s A Lick and A Promise had varying quality but this years Switzerland was a stunning return to the blistering form of those first two records. Lead single ‘Photograph‘ is a perfect pop ballad, but album opener ‘Earth Girls are Easy’, ‘Big Wheel’ and ‘Fireworks‘ were on a par with anything from their debut.

Only a few months ago James, posting as @lordmelbury on Twitter announced he was undergoing chemotherapy for bowel cancer but seemed in high spirits. It was only in a very recent interview with ex-Kerrang editor and NME scribe James McMahon that he said his cancer was terminal and he had four years left to live at most.

Unfortunately, that didn’t prove to be the case and tragically he lost his battle on Tuesday 27th October.

He leaves behind an enviable body of work, several albums that have soundtracked my summers for over twenty years, songs myself and my close friends have bellowed at each other in a drunken haze on many occasions, even played in our little band in the case of ‘Dumb‘ from the debut LP, back in the late nineties.

Gone way, way too soon. He’ll be much missed, for his social media interaction with fans and humour as much as for his incredible ability with a pop melody and bonkers lyric. His legacy lives on.