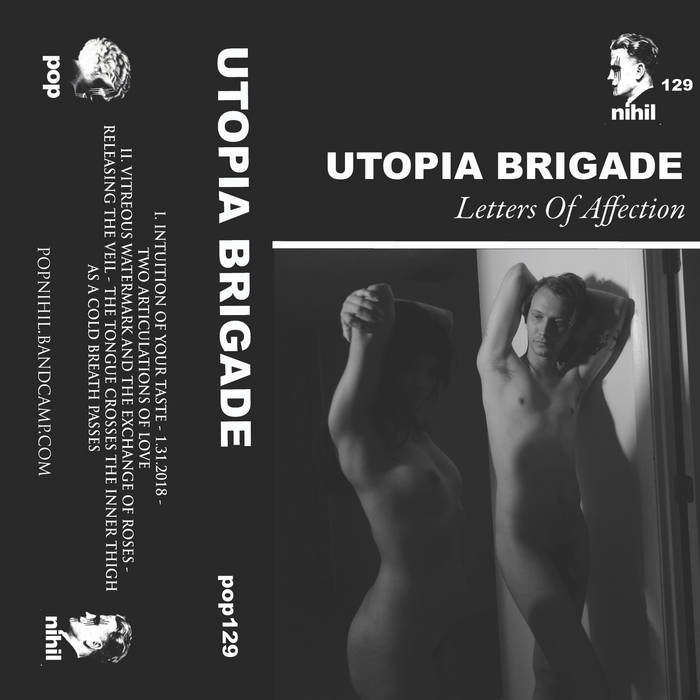 When couples make music, it can either be glorious or gruesome. Take Johnny Cash and June Carter Cash. Listening to those two singing to each other is a testament to love, affection and respect. It made you feel happy inside knowing that these two found each other. When listening to Utopia Brigade’s debut album Letter of Affection you get those similar feelings. The band is Jeremiah Carter (J. Carter) and Sarah Viviana Valdez (i_like_dog_face) who aren’t just musical partners but life partners too. Musically Letters of Affection is full of sweeping strokes of tenderness. Underpinning everything is adulation. Harmonic sonic pathways are the order of the day. Johnny and June might have crooned to each other their feelings. Here Carter and Valdez create sonic paintings.

Throughout Letters of Affection lives up to its title. Whilst listening to the album you feel like you’ve stumbled across decade old love letters. They are tender and thought-provoking and offer you an insight into something you never really thought about before. Yet there is something alien about them. As you read on you are transported to a different time that had different rules. But one thing is certain. At its heart Letter of Affection is a deeply romantic album.

The music builds with glacial slowness to majestic peaks. There are motifs of Julee Cruise, or mythology’s sirens, to the vocals. Ethereal, slightly out of earshot, but totally captivating. They pull you gracefully towards them. This is evident on ‘Vitreous Watermark and The Exchange of Roses (Opening of The Mouth)’. Throughout Valdez’s vocals are diaphanous wisps of sound. They elegantly waft around you like a hazy snake. Each time Valdez utters a note, the wisps wind themselves tighter around you. The music is laconic and languorous. It doesn’t expend much energy, but when it does you know about it. A few notes here. Indolent bass there. A broody synth there, but combined, it creates a mood of inert malice.

What Letter of Affection does really well is transport us to a place where beats, and percussion, don’t exist. A place where everything is tactile. It doesn’t matter what is, or isn’t played, it’s more about the mood it creates. This is an album to lose yourself in. To put on when you need a distraction from grey skies and modernity. It won’t connect with everyone, but when it does, you’ll find a key to another place that you might not want to leave.