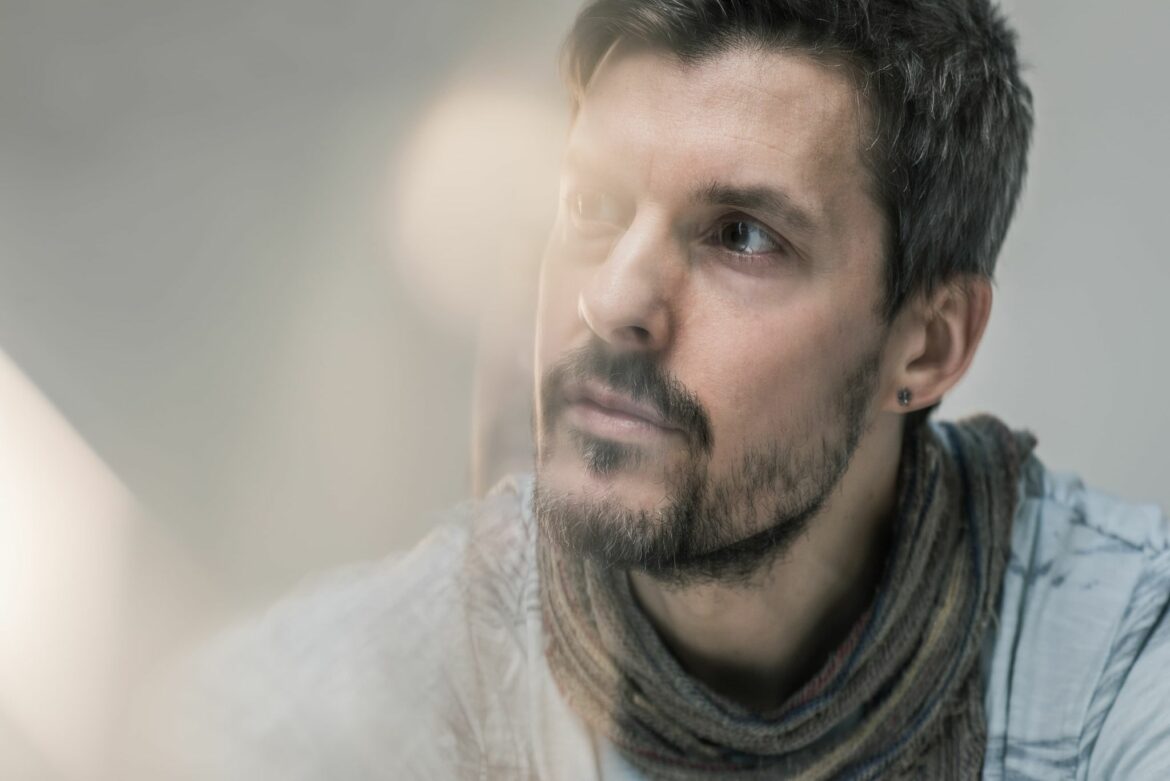 Released last month I Rise With The Birds is the new album from Pete Josef.

Having previously collaborated with the likes of Manu Delago & Roni Size, Pete Josef has always been a soul boy at heart, but his multi-instrumental skills have led him into some interesting situations.

Five years have passed since Pete Josef’s debut album Colour. The Bristolian artist has established himself as a multi-instrumentalist and producer over the years merging jazz, soul, pop, and electronic music.. His new album is a collection of radiant soul infused, layered compositions with lush orchestral arrangements, subtle electronic textures and tender performances. We sent Josef our twenty questions.

Hi, how are you today & what’s the weather like?

I’m great, it’s beautiful outside. Fresh and bright. I’m working on some music in my bedroom and can see the autumn trees changing outside my window over the valley.

In random moments – shops, walks, in the car. Mostly melodies, but sometimes lyrics or poetry. Or when I’m playing guitar or keys. I’m one of those people that has a million ideas stored in my phone. So much will be lost in time I guess, I’ll never get to finish them all.

Yes, too many times to mention and I’m an idiot when I try to speak to people I admire. I generally say something weird because I get nervous.

Very tough question. They are kind of like a business, like a PR company, aren’t they? On principle I think we should be moving on from stuff like that, it feels a bit archaic. I like all the celebration stuff though, let’s carry on that bit.

A woodsman or work in a forest somehow. I’m happy being outdoors, and love working with crafty stuff. I like building too, I’m building a studio in my garden so I can get out of my bedroom!

What was the first single you bought?

Michael Jackson ‘Bad‘. My older brother brought the vinyl first but he refused to let me listen to it so I bought it on tape. Radiohead ‘Pablo Honey‘ was maybe the next one, such a big album for me in my teens.

‘Cider with Rosie‘ by Laurie Lee. I haven’t read loads of books, I tend to read non-fiction. But this book is special, it sums up such nostalgia for a simpler time before the world got crazy.

Quite shy and awkward a lot of the time. Like most kids I hid it I think. I was a bit of a drifter, between different groups – muso’s, sporty types, skaters, nerdy types, I didn’t really stick to one crowd. I do still keep in touch with a good core of my mates though, even though we’re pretty different.

We’re really lucky in and around Bristol, we have an incredible live music scene. And such a close community of support between players and artists. It can be pretty wild too – when I lived in Bristol it was one big party, some great late night venues and clubs.

Glastonbury Pyramid, Kelis, 2014. I was up all night drinking on the bus with the band so I felt pretty bad. But as soon as I looked out over the crowd I was hit by a strange calm, like the pure joy of living out this dream took me into a higher headspace. It was awesome.

We do round robin – a track from everyone. I’m very strict about honouring the order. It’s a great way to hear new music, and some comedy crackers come out too.

Marvin, Stevie, Al Green, Cyprus Hill, Wu-Tang. My parents were in the church and so there was lots of classical and choral music in our house. I didn’t really hear pop music properly until maybe 12 onwards, but I sung in the choir as a kid so I was always surrounded by music of one kind or another.

Louis Theroux. People say I look like him, and he has my same awkwardness, only with more whit!

Vinyl. I just heard the test pressing of my album and I’m shocked how different it sounds to the digital masters. It has inspired me to get my deck set up again.

Some of the best covers I have heard have been from friends and local Bristol folk. I’ve been doing this project with a mate, Sam Brookes, who has a heavenly voice. He does a version of John Martyn‘s ‘Couldn’t Love You More‘ that makes me weep.

My album ‘I Rise With The Birds’ just came out. First album in 5 years. I’m over the moon – I’ve loved making it and am super happy with the outcome.

I hope our creative industries get the support they deserve. All this talk of retraining is bollocks. To anyone, like the Daily Mail, who say we should get a proper job, I’d say go and take a look at what our creative industries actually pay in to the economy. Makes me mad. Obviously I hope that the live music industry reboots and we can play the album out too.

Right now, Jon Hopkins. I love everything he does and find him intriguing as a person and producer. I think I am attracted to calm people as it balances out my flightiness – he seems calm.

What are your favourite local artists….

Waldo’s Gift, Ishmael Ensemble, some great jazz and electro stuff atm in Bristol. Mesadorm – amazing, out there music fronted by my mate Blythe Peppino, who is insanely brilliant. And Sam Brookes like I mentioned, voice of an angel, amazing songwriter.

Tell us about your new LP?

It’s about connection, change, reinvention. I rekindled my love for music making this album. Definitely deep and personal, but some heavy dance grooves too. Lots of orchestral arrangement, and the usual dose of soulful-ness.