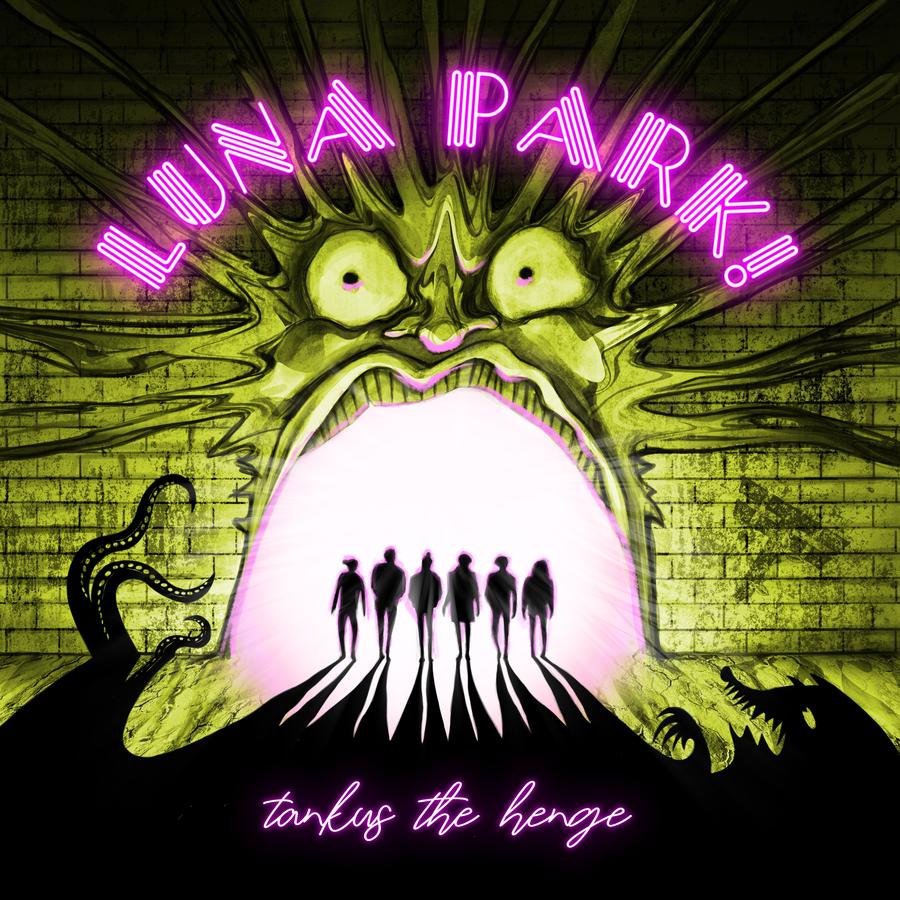 London-based Tankus The Henge are noted for their distillation of our century-old popular musical history into something cohesive and wholly accessible.
Forever on the tour bus, they have been working on their signature sound: pre -rock dalliance mixed with a psychedelic and funk median shaking hands with the Beats, Tom Waits and The Band, for nearly a decade and a half now. Their secret ingredient is an early Smiths meets Magazine aural backdrop based around singer Jaz Delorean’s family heritage: working on the UK funfairs and circuses.

Righteous to the core. They protest against the gradual eradication of London’s musical heritage by the corporate saturation of insipid coffee shops, as well as the lockdown closure of music venues. This ever-continuing epoch of facelessness is blistering on their third album, Luna Park – which strives for a William Morris-like vision: where creativity is revered and avarice consigned to the bin. The band kicks off with their recent single, ‘God Oil Money’ which begins with English self-doubt and assertive Muscle Shoals Studio-like horns: bringing to mind a unifying mix of Gabi Garbutt and David Devant. It seems to address people’s ‘status anxiety’ by using the metaphor of “big blue marble cracked to the core”, similar to Love’s ‘Forever Changes’.

‘Fayaway’ is on the cusp of a rootsy Motown/Stax ‘66 sound looking ahead to the wispy psychedelia of ‘67. This is lyrically implicit (“across the waves of a gossamer thread”). It could be interpreted as a paean regarding a beautiful Biba It Girl. But nevertheless it simply hovers in an Otis-like stage-stomping fashion organically alternating between the two epochs. ‘Sundance Kid’ is the dark side of such appreciation. It is confessionary with sprightly horns and is lyrically-intricate. It seems to be about an ‘oppressive idyll’: in this case, a Renoir-like cornfield. The Hendrix-like wah-wah guitar stands out like a sore thumb beautifully.

The brilliantly gloomy ‘Glitterlung’ embodies the pining repression of the suburbs. Like with The Clash’s ‘Lost In The Supermarket’, the hedge is forever overgrown. Aesthetically morose-sounding. It is a blatant plea for acknowledgement over anonymity. This theme is continued with the torch song preciseness of ‘Back To You’. It is like the next chapter of ‘Glitterlung’ and comes across like Bowie circa ‘Station to Station’ as if he never really left Bromley.

‘Susie Sidewinder’ is a slab of Waitsian ominousness circa ‘Swordfishtrombones’ with children’s book lyrics (“grinning like a Cheshire Cat”). It is as if the song’s character is succumbing to an eccentric Femme Fatale descended from John Children’s ‘Sara Crazy Child’. The focused, but fog-ridden ambience continues with ‘Worries’ which is melancholic and imbued with the style of early jazz. All about being ‘done’ with working on someone’s dream, and qualifies as sulky lockdown blues. ‘The Only Thing That Passes Here Is Time’ shows stylistic reverence to Bowie’s ‘Time’ and that is OK. Tankus challengingly transpose theirs and Big Dave’s imagery to a smoggy pre-war London, where a sticky end is alluded to.

Despite these purposeful melancholic musings, there are moments of respite. Things get technicolour and raga with the Soundgarden-like bridge of ‘Luna Park’. The skippy ‘(Livin’ Like A) Pilgrim’ evokes Broadway with Sinatra on speed. Its style is Bowie’s ‘Young Americans’ meeting ‘Don’t Stop Me Now’ by Queen. Free-spirited and a significant departure – all about living in the moment. Which Freddie Mercury did.

Like a lot of albums, it ends in a bathetic way with ‘Staying On This Side Of The Dirt’. This is Cure-like with well-enunciated lyrics (“not going to pay any bills. Lost it all at William Hill”). In the gutter definitely, but looking up at the stars. Singing in the downpour…….

‘Ambiguity’ is the key central theme of Luna Park: both celebratory and downbeat and, of course, character-driven. Like Kate Bush’s ‘Hounds Of Love’; Luna Park can be divided into two psychological halves: a kitchen-sink drama with a potentially happy ending? Wait and see. The future has only just begun.

Luna Park is self released on December 4