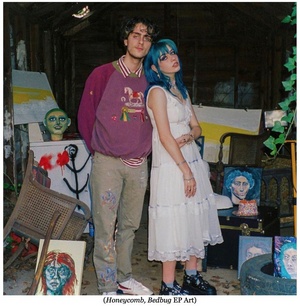 It never ceases to amaze me when people form alternative bands and manage to secure a record deal for themselves all before leaving school.  But, how are they not bullied and consequently traumatised into a state of being that paralyses both creative and academic output, I ask myself.  How come it’s not taking them until their late twenties to develop enough confidence in which to express a voice?  Is it possible that there is a nurturing figure strong enough to protect teenage outsiders before they become broken adults and if so where the heck were they when I was growing up?

Of course, I don’t know if Lowertown really even consider themselves as outsiders, I naturally assume this because they’re making lo-fi indie music in the same vein as Alex G (Sandy), Kimya Dawson and Coco Rosie.  It’s not exactly Cardi B and I can’t imagine them playing an O2 academy anytime soon (this is a good thing).  Lowertown is comprised of Avsha Weinberg and Oliva Osby, who met In their math class and recorded their first single together ‘George‘ when they were 16.  They recently graduated high school in Atlanta during the pandemic, and now they have a new EP release and a cooking show.

The pair cite influences that include the likes of Modest Mouse, Radiohead, Aphex Twin, Alex G and Animal Collective.  The EP consists of six songs, half of which were written before COVID-19 whilst the others were written after the outbreak, the result of which can be seen in the lyrical content moving towards issues of environmental concerns and the topic of isolation.  In Osby’s own words, ‘Honeycomb, Bedbug was written during a point of extreme change and development in both of our lives.  Avsha and I were nearing the end of high school and this forced us to heavily contemplate our futures.  We were at the age where the line starts to blur between if we were now to be considered adults or still teenagers.’

The record reflects the dichotomy between youth and age, Osby’s vocals sound like a huskier Kimya Dawson at times and whilst the songs on Honeycomb, Bedbug are playful and light, there is sophistication in the downtempo mood of the record and the intricate layers of instrumentation that build and softly crumble parts of songs; the odd time signatures that don’t sound jarringly odd or out of place show skill and innate understanding of the mechanics of music.

Alex G style fingerpicked melodies seep through on the record’s first track Best Person You Know. The song begins with a few guitar chords that are punctuated by Osby announcing “I am so confused, don’t know what to do. I feel like sitting alone in my room, get your pride out of my face, tell me I’ll be ok, the words that you say don’t make you any more of a man.”  Whilst the chorus sees Osby repeat the question “do you believe in God or anything at all?” Weinberg plays it out with an extended outro that shows good range and compliments the optimistic yet frustrated sentiments expressed in the song.

Speaking about her mindset throughout the creation of the record Osby notes how ‘[I]mportant parts of my life were rapidly changing as I was maturing and many questions began to rise for me in the process.  I contemplated the growing complexity of my relationships with friends and family, the higher education system in America, how my gender affects the way people perceive and treat me, and how I should be spending the remaining valuable years of my youth.’

It’s tempting to use the phrase “teen angst” to categorise the themes depicted by the band but that seems like it would undermine the very real feelings and topics that Osby’s lyrics broach.  Writing it off as teen angst is part of the problem, the point Osby makes about not really knowing where they stand regarding how they’re perceived isn’t just an aspect of being a teenager, a phase they’ll grow out of, it’s not knowing how to navigate a society that more often than not exploits and devalues young people.  It puts them in a box which is the topic of the second single off of Honeycomb, Bedbug.

Incorporating a toy drum machine and a broken tambourine, the pair set out to create an intricate sounding bedroom recording, making the conscious decision to leave in sounds from their immediate environment such as tapping on the tables and water rushing in the pipes, with the intention of creating an atmosphere in which the listener feels as though they are in the room with the band. Weinberg possesses a meticulous eye for detail, ensuring that every intricate instrumental detail enhances the mood of Osby’s lyrics.

According to Osby, ‘Tourist Trap was a song written during my senior year of High School.  At this point in my life, the only thing that existed was an uncomfortable repetitive cycle of going from home to school over and over.  I felt like I lived in this box where I would do homework, watch TV, write college applications, listen to and write music, then sleep, and then I’d wake up and travel to another box where I would sit for eight hours a day taking notes, being quiet, dozing off, or counting down the seconds until I got to move to the next period of class which felt the exact same as the last.  I think a lot of us get trapped in a “box” whether it’s the thought loops we get locked into or our daily routine.  We can sometimes cage ourselves into this repetitive, mind-numbing cycle that starts to feel like the only possible way of doing things.’

Honeycomb, Bedbug is a strong release that sits comfortably alongside Lowertown’s more established lo-fi indie peers.  Whilst the duo do have separate artist pages on Spotify, the music they’ve written and recorded collaboratively within this project really works to draw out the best qualities of both Weinberg and Osby as individual artists.  Despite being confused about what the future might hold themselves, it looks bright should they continue on the trajectory they are currently going in.