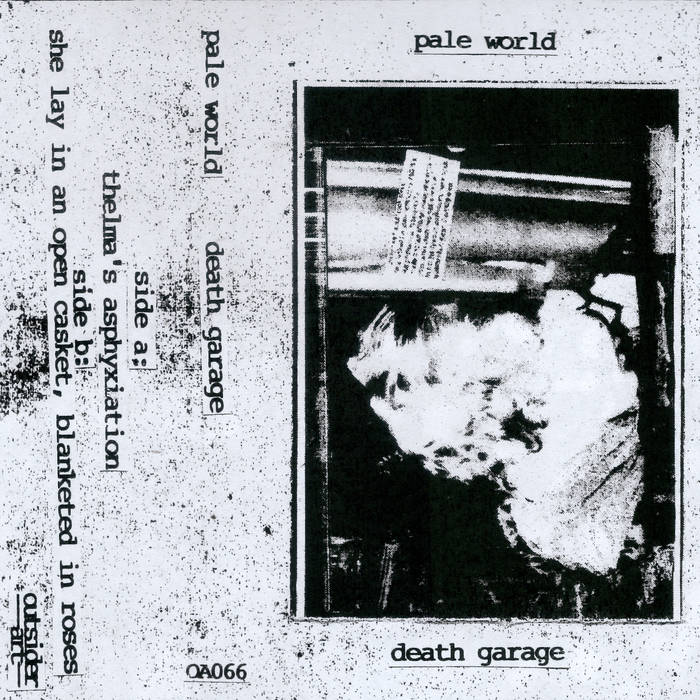 Tar and molasses. These are the first things that spring to mind after listening to Death Garage. Both are sticky and can be painful to remove from your skin if left on too long. What is contained on Death Garage feels like the culmination of Pale World’s career to date. It contains ideas and motifs that he has returned to again and again, but they never felt as impactful as they do now. Maybe it’s the post-holiday melancholy but this feels like the right album for right now.

‘Thelma’s Asphyxiation’ opens with a wall of noise. It’s brilliant. It knocks the wind out of you and doesn’t let you get your breath back. When looking back at my notes I have written down “a cauldron of hate. This might be a tad over the top but at times it feels right. It’s an unrelenting, bubbling, kind of noise. Like that when you are boiling vegetables or eggs. There is no need for it to end until its job is done. The job of ‘Thelma’s Asphyxiation’ is to pummel and punish us. The reasons are vague, apart from this is what Pale World does.” He either pummels us with walls of harsh noise, or delicate ambient drones. Halfway through the clouds part. The sun comes out and we can hear those delicious melodies underneath. Sometimes we can hear it clearly, other times we only get faint hisses of static. Listening to this reminds me of when I used to listen to my Walkman on car journeys as a teenager. I didn’t have enough power to listen to cassettes but more than enough to make it to our destination with the radio on. As we’d crawl down narrow country lanes and zoom along motorways, the signal would jump in and out. At that age I thought we were travelling either too slow, or fast, for it to find me. Whilst listening to ‘Thelma’s Asphyxiation’ I am reminded of that feeling – waiting, heart in mouth, for the signal to return so I could continue to hear the Top 40 rundown, or the end of a story that a presenter was telling.

If ‘Thelma’s Asphyxiation’ was an exercise in excess, ‘She Lay in an Open Casket, Blanketed by Roses’ is all about restraint. The same feeling of malaise and despondency remains but what is achieved is the polar opposite. Gone is searing noise and in its place is a delicate drone, underpinned by evocative and atmospheric recordings of what sounds like
a junk table. It’s calming but with dollops of desolation. However, the final third suddenly jumps into harsh noise territory. It feels more caustic than ‘Thelma’s Asphyxiation’, but that’s only because we’ve listened to seven minutes of serene soundscapes. Then, as soon as it starts, it is over, and we are back to the audacious ambient vibes. This downtime gives us a moment to reflect on what we have heard and what to make of it. Will you play it again, you know, for shits and giggles? Will you put on something brighter, to liven the mood or will you just let it run out and sit in silence for a bit? That choice is yours. I know what mine is. I’m in the throes of ‘Thelma’s Asphyxiation’ again.

While I listen to the album, I can see two squirrels run up and down a tree. Jumping from barren branch to barren branch. They are playing a game but at any moment it could become serious. Either of them could mistime a leap and fall. Somehow, they don’t. They have expertly timed everything so that personal disaster has been averted. Pale World has done the same. While Death Garage is pretty harsh in places, it never goes over that line between pleasure and pain. Instead, it occupies a very special place. A place where truly remarkable albums live. Albums created by ingenious musicians who are bored with what has come before and want to try something new. Pale World is one of these musicians. His back catalogue is filled with moments like this, yet Death Garage seems to work better while hitting both harder, and softer, than anything before it. All hail the garage. The garage is dead.