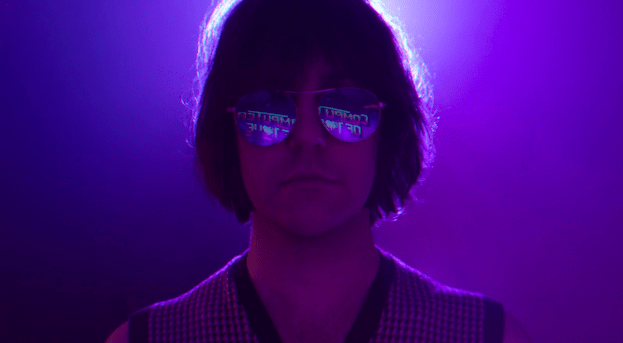 The Nashville singer-songwriter, guitarist, and record producer Aaron Lee Tasjan will release his fourth album Tasjan! Tasjan! Tasjan! on the 5th of February 2021 via New West Records. To herald the new album, Tasjan is debuting ‘Computer of Love’ – the second track on the record – complete with an intergalactic music video directed by his fellow American and renowned photographer and filmmaker Curtis Wayne Millard.

Talking about ‘Computer of Love’ – a delightful slice of highly contagious retro-pop, bringing very pleasingly to mind vintage Tom Petty and the Heartbreakers – Aaron Lee Tasjan says the song is an exploration of “disconnection in the social media age –  it’s a surf anthem and I’m talking internet. The ways in which social media and our phones put an emotional barrier between all of us, the search for sex and love in the age of the internet and the way each generation trolls the other generation’s musical choices.”

Tasjan goes on to say “Social media is rich with irony these days. Melania Trump created an anti-online bullying initiative as First Lady. When you consider her husband’s Twitter account, it seems like something doesn’t quite add up? Social media platforms make stars out of people who go out of their way to never consider themselves or the consequences of their actions and it’s been great to see them start to address that in some way, but they, of course, need to do more and fast?”

Aaron Lee Tasjan’s observations about the song and the impact of social media take on an even greater resonance given the extraordinary and horrendous events that unfolded on Capitol Hill in his home country last week and the subsequent decision by Twitter to indefinitely suspended the account of one Donald J Trump.

The video – populated by a jet-propelled BMW convertible, various robotic dancers, satellites and assorted cosmic imagery – is the second in a three-part space-themed series directed by Curtis Wayne Millard.