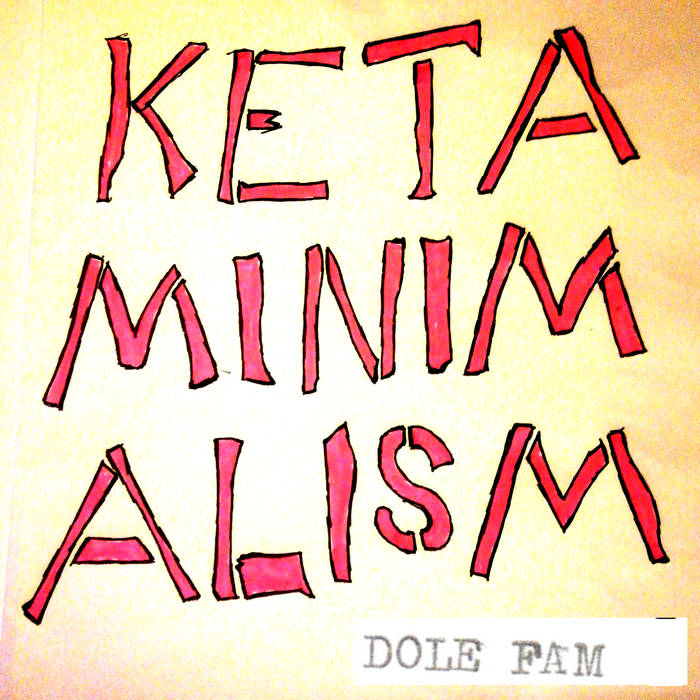 On previous Dole Fam releases there is an overriding morbid feeling. The music was oppressive with an unrelenting heaviness permeating every moment. It was part of their charm. Just how overpowering they were. However, Ketaminimalism, his fourth album since September 2019, is different. Here Dole Fam appears to have found a period of stability. Each of the songs are constructed from vocal loops and wonky synths. The loops create elegant rhythms that build the intensity whilst keeping everything moving forward. This gives the recordings a measured quality that previous Fam albums were missing. The gloomy claustrophobia has been replaced with lighter, airier, composition. Just take ‘A Body Without Organs’ for example. It feels translucent in places and, dare I say, fun. After listening to it a couple of times it really wouldn’t be out of place scoring a scene in a children’s film, where the protagonists find out that the fantasy creatures they always dreamed out weren’t just real, but had come to help on their quest. These thoughts would not have been possible on previous releases and the album benefits from it. Throughout Ketaminimalism Dole Fam punctuates the album with short, spoken word monologues. These are the most interesting tracks as he discusses his current mental states, what it is to be alive and how he ultimately would like to see his death. ‘Folk Music (a simulacrum)’ is one of the standout tracks on the album. It is constructed from samples of world music, and jazz music, cut up, layered, and basically messed about with to create a disorienting soundscape. The contrast in tone, compared to the more sedate tracks on the album, is as striking as the source samples. It wakes you up from a reverie and makes you confront your present. It reminds me of walking about souks at dusk. The live music from the bars and restaurants fills the air, as does the aroma of freshly cooked food. There is a hint of danger too. Street pedlars are still about and, in the gloaming, jump out to drag you to their stall to buy trinkets, sweets and have pictures taken with incarcerated animals. It’s all there in five and a half minutes.

Ketaminimalism feels like an exercise in positivity. Well, if not positivity, then its an exercise of looking at yourself, working out what makes you happy and then focusing on that. The opening track is titles ‘I Need to Consolidate the Happiness’. Throughout its 42-second duration Fam says “I’m happy, but this is very early days” while low level static fuzzes and hisses in the background. Then he says “I can’t get ahead of myself. I need to consolidate the happiness”. If this isn’t our collective mindset for 2021, I don’t know what is. On ‘Begrudgingly an Entrepreneur’ he states that money is not an indication of value and that during this year he will work hard and create something great. Hey, Dole Fam. Task over. You’ve done it. Ketaminimalism is your most focused piece of work to date. The cut-ups work incredibly well. The music is clever and enjoyable. While it’s still early doors with this album, it does rank up there as my favourite piece of music you have created. However, if you wish to try and better it, we’ll all be excited to hear that opus!