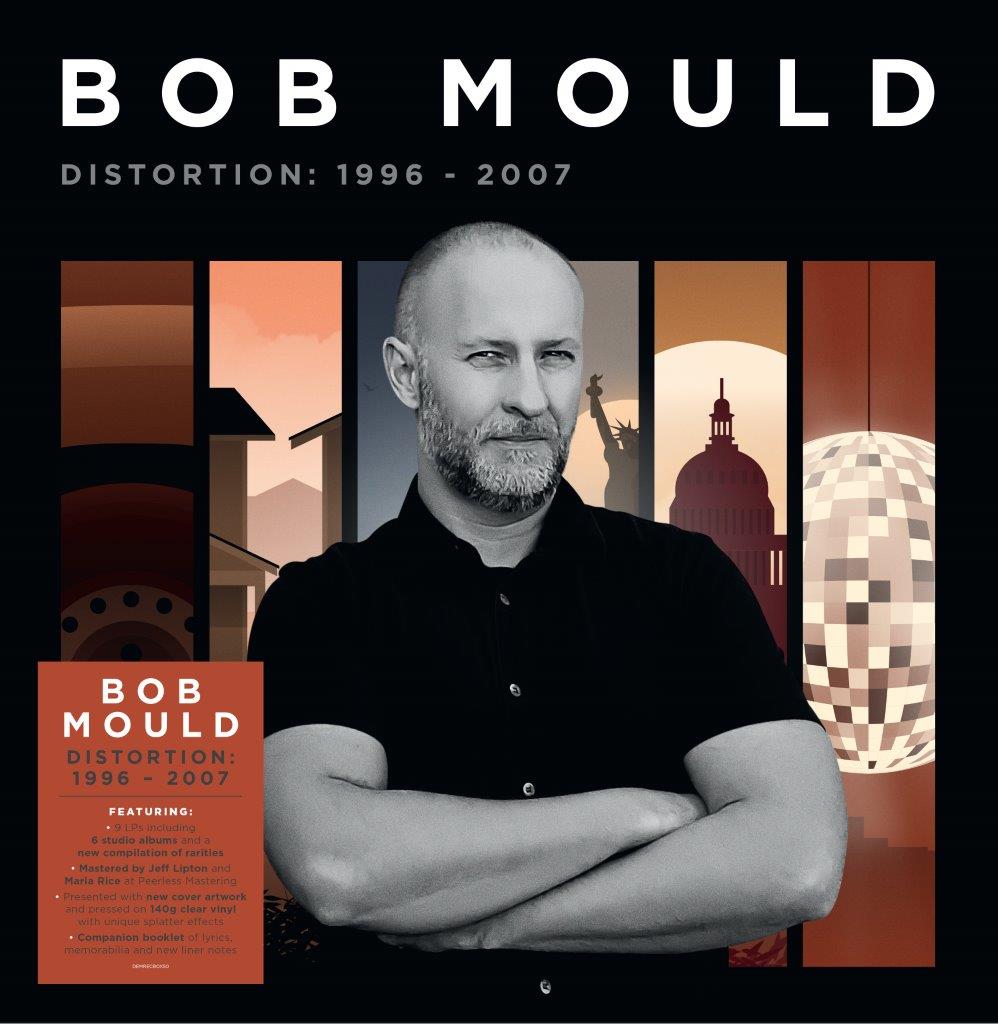 There is no arguing about the fact that Lockdown and hitting a birthday milestone is an occasion for potent reflection – both for an artiste and his or her fans alike.

On October 16th, 2020, Minneapolis’s ‘second favourite’ 80s musical ‘icon’ (and a good foot taller than its first) Robert Arthur Mould turned 60. As if to coincide, the third part of his gargantuan Distortion box set which covers 1996 to 2007 has been just released. It provides a veritable candy store for die-hard and casual fans of Mould’s post-Sugar oeuvre, as well as consolidating his continual trailblazing legacy – along with The Replacements’ Paul Westerberg – as one of the key bastions of U.S. alternative rock.

Born in Malone, New York, and moving to Minneapolis in the late 70s,
Bob Mould was barely out of his teens when he co-founded the abrasively seminal three-piece Hüsker Dü with his musically minded buddies: the late, great drummer/vocalist Grant Hart (1961-2017) and bassist Greg Norton.

Their lineage of classic album releases got off to a semi-auspicious start with the indecipherable Land Speed Record released in 1982 on Minutemen’s New Alliance Records. While it reinforced their gate crashing reputation, it still embodied the fashionable restrains of ‘hardcore’. The subsequent releases – chiefly on SST Records – peaked at the decade’s midway mark: notably Everything Falls Apart, Zen Arcade, New Day Rising. What made them unique was their empathetic ‘everyman’ sound that was spearheaded by Mould’s gravelly old/young frat boy vocals and Flying V fuzz.

Unlike a significant amount of their hardcore-centric contemporaries; they unashamedly acknowledged that there was a musical existence prior to CBGB’s and The Sex Pistols’ ill-fated USA tour. Each member had a 60s childhood. So such influences (The Beatles, Byrds, Beach Boys, The Stones, The Who, et al) were dispersed within their albums – along with John Coltrane jazz leanings prevalent in the longer tracks – right up until their major record releases, Candy Apple Grey and Warehouse: Songs and Stories – both released on Warner Bros.

Hüsker Dü’s career came to an abrupt halt in early 1988 after the suicide of their manager David Savoy. Amid such disarray, Mould – still in his late 20s – had reached the stage of being a much revered name amongst younger contemporaries notably Pixies and Nirvana – both exponents of the ‘grunge’ explosion just a few short years away.

A solo career was inevitable for Mould. As if to suggest a departure from the fiery innateness of his former band; his albums, Workbook (1989) and the despondently heavy Black Sheets Of Rain (1990) both took their cue from his hero, folk rocker Richard Thompson. Unfortunately, neither album – both released on Virgin – was well-received. This encouraged Mould to change tactic for a more commercial focus which would result in making his musical status less tentative.

His 1990s really got going with his most accessible venture yet, the three-piece Sugar’s debut album Copper Blue – released on Rykodisc/Creation – was voted by the NME as the best album of 1992. It was released in the light of Nevermind, and it brought, by default, ‘grunge’ full circle. Mould had finally and deservedly achieved Mount Rushmore heights on the now mainstream alternative rock canon.

Now to the box set which is all about his fourth career stage. Mould eventually returned to solo recording in 1996, with his eponymous solo album aka Hubcap. This particular release contains traces of Hüsker Dü. It is reassuring and predictably easy on the ear. It seems to drift in and out of influences and genres that may mystify and challenge the listener, as if he is subtly throwing the dice to decide the next chapter for his solo work – if he did not have Sugar set in his sights.

The tentative ‘Anymore Time Between’ has breathy vocals, but sounds like Hüsker Dü shrouded in confusion. It is a suitably intense opener nonetheless. He is not afraid to dip his toe in genres that he has yet to explore. ‘I Hate Alternative Rock‘ is a bursting song. It has a
Queen-like feel about it, like he is purging his demons while staying up-beat. ‘Egøverride‘ begins in an accessible way, but festers with the sound of his ego going out of control. This is genuine hand clenching stuff. Mould seems to be ironically repressing his violent side with plenty of fuzz and raga-like guitar.

The aesthetic head spinning continues with ‘Next Time That You Leave‘ which focuses on dashed expectations, and the soul searching ‘Thumbtack‘ which begins like the Mould of yore with plaintive acoustic guitar. It is a nice enough song, even though it doesn’t really go anywhere. The album’s best track is the most transient, the 60s garage-infused ‘Deep Karma Canyon‘ with a blatant scenic description and a soothing lyrical refrain.

Hubcap is somewhat a confusing mish-mash. But it means well, however, with room for improvement and a pining for more consistency.

The second disc is 1998’s The Last Dog And Pony Show. The low-key title is somewhat off-putting, but believe me, it is a grower in the nicest way. It is a true assertion of Mould’s planning since Hubcap and it works! The array of genres that Mould indulges in are beautifully encroaching. They get going with the multi-layered swirl of ‘New #1‘ which conveys to us a new level of insight: wildly experimental, and then earthy with a feeling of controlled abandonment.

‘Moving Trucks‘ is a perky kind of heartland rock, with an expressive guitar-solo and festooned with cinema-like organ. It shares the same transience as ‘Deep Karma Canyon‘. Things are brought down to earth with the everyday apartment-like frustration in ‘Classifieds‘. ‘Who Was Around?‘ is a welcome ‘Black Sheets Of Rain‘ throwback – a forefront song with a fetching hanging in mid-air solo.

‘Skintrade‘ begins ominously, then goes into familiar Husker/Sugar territory. It is in a setting worthy of the Hüskers’ ‘She’s A Woman And Now He Is A Man‘ from Warehouse. It is very melodic and elevated and is one of his best songs from that era.

But the real stand-out track is ‘Megamanic‘. For the time, it is totally contemporaneous – drum ‘n’ bass/trip hop-sounding! It is a surprising departure not just in the context of the album, but for Mould in general, functioning like a belated ‘Tomorrow Never Knows‘. This would no doubt be a shocker if you were of a ‘certain age’ and sequentially followed Mould’s career. Clanger or epiphany? The choice is yours. Controversially daring, nonetheless!

What ‘Megamanic‘ set out to follow, it is fully encapsulated in ‘Modulate‘. This album contains traces redolent of older artistes going out on a limb, i.e. Neil Young with Trans and Joni Mitchell with ‘Don Juan’s Reckless Daughter‘. A totally new vocoder-driven dimension gets going during ‘180 Rain‘ which attests that Mould’s shift in genre makes his past completely alien. No bad thing.

‘Sunset Safety Glass‘- with its Philip Glass-like insinuations – brings to mind dappled late afternoon NYC sunlight. ‘Semper Fi‘ and ‘Without?‘ is where Mould reaches hurriedly to reclaim the essence of The Tooth Fairy And The Princess from his musical toy cupboard.

There are songs that make a statement, such as ‘Slay/Sway‘ which reveal how brilliantly mismatched bedfellows hardcore and synth sounds are. ‘Quasar‘ is like a blueprint for Radiohead’s In Rainbows five years in advance. And the continuing sonic intensity is epitomised well in ‘Comeonstrong‘ which has no qualms about reaching an industrial size. Total nonchalance and nice with it! Long Playing Grooves which followed the same year (2002) is an entirely electronic work which picks up from where Modulate left off.

In a similar vein was 2006’s Blowoff: a side-project which arose from the Blowoff DJ events Mould ran with Richard Morel. This album is primarily half-electronica and half-guitar focused and appeals to long-term fans of dance music. Even the song titles ‘Saturday Night All The Time‘ and ‘Overload‘ could not be more further removed from Mould’s mosh pit past. The opinion raised at the time was variable: some OK memorable songs, while others less so.

2005’s Body Of Song certainly befits that old chestnut of a ‘return to form’. Synths aren’t really all that present, and it forms a welcome foray into Mould’s reflective past which the opener ‘Circles‘ conveys. ‘(Shine Your) Light Love Hope’, in an insouciant way, alternates between optimistic, plaintive and inconsequential fields. The workmanlike ‘Underneath Days‘ has generic pounding drums which take precedence, revisiting the oppressive everyday life of ‘Zen Arcade (Never See The Work I Do)‘. ‘Always Tomorrow‘ begins with a trippy-centric bass line. Both Jeff Buckley-like and psychedelic, and a contender for creating The War On Drugs career blueprint. ‘Missing You‘ starts off a bit like ‘Baba O’ Riley‘ and goes into radio-friendly Sugar-like territory with acceptable join the dots lyrics. But in a dynamic forceful way.

‘ Gauze Of Friendship‘ was no doubt close to Mould’s heart. He chastises an unsuitable relationship, reminding us of the overall fickleness of human existence. It uses metaphors, and sounds like it could be an outtake from Workbook. Only better. No doubt about it. Body Of Song is probably the best album that Sugar never released.

To compliment the studio albums is a new compilation Distortion Plus: 1996-2007 which features an impressive selection of bonus tracks including the demo version of ‘Dog On Fire‘ (Theme from The Daily Show), B-sides and other rarities.

Distortion will no doubt encourage guilty-free binge-listening throughout the forthcoming long dark winter Lockdown nights. Like with The Beatles’ or Lou Reed’s solo material, when you compare it to their previous groups’ efforts, a sense of a ‘dividing line’ is usually felt. Bob Mould is no exception. His late career versatility may not be to everyone’s tastes. For some fans of hardcore, Hüsker Dü or Sugar, his trip hop/dance experimentalism will be anathema. That goes with the territory.

The starting point for Bob Mould’s post-Hüsker Dü, post-Sugar output may be indefinable and somewhat erratic for less than than casual fans or newcomers. But take a ride and go with your gut reaction. The future may be brighter than expected.
Distortion 1996-2007 is out now on Demon Records.
8/10