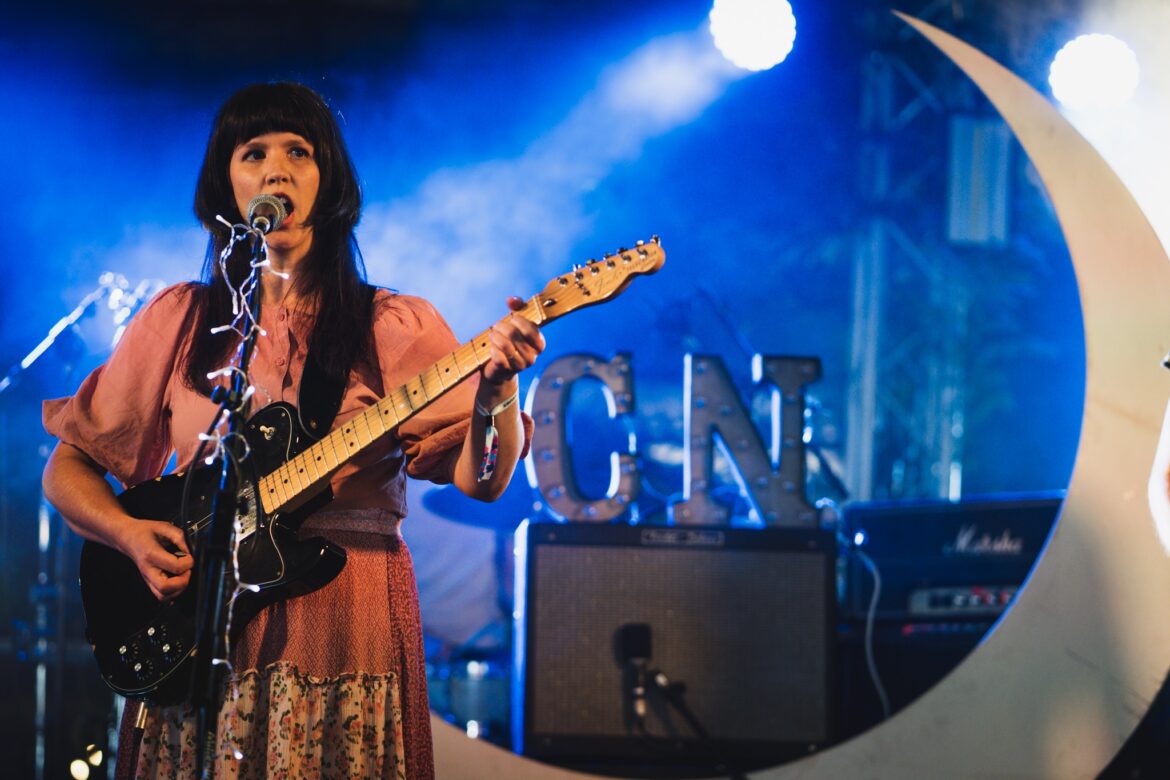 Scottish born and Lake District based Celestial North released her single ‘Distant Life’ in November 2020 and captured our hearts immediately. Her reflective and shimmering music, with its bittersweet embracement of both hope and melancholy, stood out like a beacon – a beautiful wave of light during uncertain times.

There is something about Celestial North’s music that undoubtedly enchants. There is the reflective depth to her lyrics that draws the listener in, and the shimmering wall of sound that dazzles, but there is also something else: a captivating feeling towards life and land and nature. Her music offers a gorgeous open-hearted approach to the universe and life that is much needed right now.

Celestial North has been tipped by God is in the TV as an artist to watch in 2021, and from listening to her music, and reading her words, it is easy to see why. We await her debut album with much anticipation.

Just to give us a sense of where you are at right now, what have you been doing today?

Hello! I am currently at home in front of my fire in Kendal and I can see the snow on the hills and all the little birds in the garden dancing around looking for food. Obviously, we are in lockdown so life has been quite strange for a few months now, but I have been recording some lead guitar today at home for my new album, home schooling my children and dyeing fabric with natural dyes. I feel really strongly about learning to live in a more sustainable, ethical way.

I have had quite a varied music taste over the years. Obsession over John Squire’s sparkly guitar sound started me off, but I did love the angsty Goth years obsessing over Echo & The Bunnymen, The Manics, Julian Cope, The Clash, The Smashing Pumpkins, Leonard Cohen, Patti Smith, David Bowie, Joy Division, New Order. A lot of post punk records. I rolled around in my own teenage angst maybe longer than need be! I think I am still doing that actually. I was too young to experience most of the bands I loved first-hand so I had a lot of fun trying to source singles and albums pre streaming life. Obviously growing up in Edinburgh meant that I was heavily influenced by bands like Idlewild, Mogwai and The Jesus and Mary Chain. I moved onto more experimental things, more krautrock and postrock when I was a bit older and since then I’ve been influenced by so many different genres/artists.  I also love old school Rap and Hip Hop, Grime, Flamenco, Pop, Electronic music, folk. Diversity is so important in all aspects of life.

Your single ‘Distant Life’ really stood out to me last year, with its beautifully reflective lyrics – can you tell us about what inspired this song?

Thank you! I wrote this song as if I was giving counsel to my younger self. I was thinking retrospectively a lot during lockdown – of things you do when you are young, things unsaid and done, regret and remembrance. These are the experiences that mould you. Coming of age is such a turbulent time, emotions are high and it’s all so weird because as we pass into adulthood we have a deep-seated melancholy for those years. This was like a gentle hug to the young me.

‘Distant Life’ was recorded & co-produced with Woody from British Sea Power who also features on drums – what was it like working together?

Well, Woody is my husband so the whole process is quite an in-house affair. Woody actually plays drums on all my songs and plays live with me too. I love working with him, we are completely sonically aligned and his levelheaded technical ways smooth out my hyperactive dreaminess and inattention so that’s good. He is a really great producer; he seems to have a great knack of making everything sound massively expansive.

I also love your previous singles ‘You Painted a World’ and ‘Hey, Völva’! Could you tell us more about your song-writing process and the topics that you are inspired to write about?

When I first started writing I used to imagine characters and scenarios and was able to hear the music that matched that scene. I think I see music in moving pictures in my brain, which sounds weird I know. I can see the landscape and the colours and certain sounds matched the feeling attached to those images. A lot of it is magical thinking, fantasy of sort. I like sourcing ideas from old books, texts, films too. Each song was a bit like a dreamscape with a slight autobiographical edge. I think most of my songs involve escapism and introspection but recently I have been quite influenced by songwriters like Scott Hutchison. He was such a brilliant lyricist and musician who was able to write about everyday feelings with such clarity and precision (and swear so well) so I have been exploring that side of me more which has resulted in a more reflective, autobiographical style.

Recording wise I find it fun to record real life sounds, like wind or storms or rattling chains in buckets or scraping brass candlesticks and then put them through resonators and things which can create some quite unusual and magical sounds. I play and record all the instruments myself at home, with the exception of drums which is Woody’s job. Sometimes songs come to me in dreams! Nothing’s normal around here.

How has it felt, as a musician, releasing your first singles? What are your main thoughts and feelings as you put your music out there?

It feels really nice to be releasing songs that people are connecting to. Sometimes it can be hard and daunting to be an independent musician releasing your music into the world for everyone to hear. Sometimes you wonder if anyone is actually listening, so it has been lovely to have had such a warm reception to my songs.

What plans do you have for your debut album and when do you anticipate it being released?

I am working on it at the moment with Woody and hope to release it this year. It’s going really well so far. I am so excited to be finally putting together a physical body of work that I hope to be released on vinyl. I like extremes, so ideally I’d like a mix of intensity, loud and quiet, full and sparse but we will see. In my head it sounds like some kind of cinematic cosmic fairy-tale, whatever that is!

You live in the Lake District – what impact, if any, does the location have on you and your music?

Location has a huge impact on the music I make. Certain surroundings really alter my mood. I like wilderness and remote places. I like the juxtaposition of soft rolling hills, little stone cottages and wildflowers set against looming jagged mountains, brooding inky skies and never-ending lakes.

What TV shows and books did you enjoy most this year?

I really hardly ever watch TV but Woody and I have a pretty hefty Outlander obsession! I’ve just re-watched Absolutely Fabulous, which is maybe not the sophisticated answer people want?? I just read Circe which was great, and a book called Rival Queens retelling the story of Mary Queen of Scots and Queen Elizabeth from a more feminist angle. I’ve been reading a book about Greek mythology with my son – it’s fair to say there’s not much time to get bored in our house.

How are you coping with everything during the pandemic, and the lack of live physical shows?

I was just getting started in my live music career when the pandemic struck, and all my shows were cancelled which was so disappointing. I have quite a big sound and enlisted some wonderful musicians to help me interpret that live. With the help of Michael, Martin and Woody, we rehearsed the set and it was all sounding so good, we couldn’t wait to get out and play some more live shows but unfortunately we got locked down fairly soon after. I feel really confident that it will all fall back into place when it is all over. This whole situation has affected Woody and I greatly as I am sure it has many other musicians. It has been quite difficult to carry on at times when money has been invisible and we have been at home trying our best to keep on top of normal life responsibilities. I feel really strongly that our government has failed the arts and they need to be held accountable, whether that will happen or not is anybody’s guess.

What is the best live music concert you’ve ever been to, and why?

I have been to quite a lot of amazing gigs so I’m finding it hard to remember! In recent times, I saw Young Fathers at Electric Fields a couple of years ago in a tent and they absolutely blew me away. There was something almost shamanic, trance-like in the way they sang and moved. I hope they release more music. Oh, and we saw The Sugarhill Gang at a festival Woody was playing once with British Sea Power and they were brilliant.  After the gig Grandmaster Flash took my son aside and did a special rap just for him – it was amazing, I’ll remember that forever!

What songs or albums helped get you through 2020?

I went super reflective. I listened to a lot of Frightened Rabbit, Felt, The Twilight Sad, and some minimalist emotive music like Olafur Arnalds and Nils Frahm. I’ve listened to Great Coat by LYR quite a lot and I’ve really enjoyed the intensity of Kathryn Joseph‘s last album. Actually, I’ve really loved Aurora’s Infections of a Different Kind which was such an imaginative, wonderful world to escape to at times. I like to immerse myself in all the tiny magical sounds on a record and sometimes I forget to listen to the main part of the song! On the flip side I am a sucker for a big hook.

I plan to release my album and hopefully someone out there will want to sign me and give me some shows! Well, if we all get through 2021 happy and alive then we have accomplished something, right?!

‘Distant Life’ is out now.