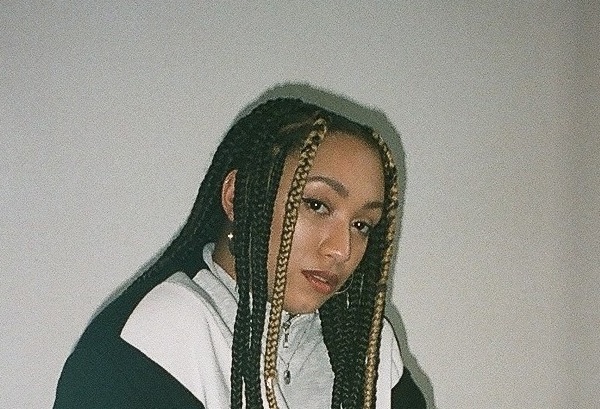 Parisian alt-jazz singer-songwriter Cha:dy released her new single, ‘Lazy’ on 28th January. The song is an honest exploration of mental health struggles.  Having experienced depression and anxiety herself, Cha:dy channelled this into her songwriting in the hope of helping others through her music and ultimately making them feel less alone.

Cha:dy’s music combines a compelling introspective focus in the lyrics with gorgeous vocals, with both elements gloriously and powerfully pulling the listener in. Mental health is a topic that we need to keep talking about, and I really welcomed ‘Lazy’ – a song that will ring true for many right now. This song is brimming with honesty, and that’s exactly what makes it so beautiful, raw and powerful. Cha:dy is definitely a rising musician to watch, and with her EP forthcoming in June, I really look forward to seeing her next steps.

Your vocals are so beautiful and striking. When did you realise you could sing? And when did you know you would like to be a singer?

I know it sounds really cliché, but as far as I can remember, I was always singing as a child, I was always imitating my favourite artists using a hairbrush as a mic and just singing along to my favourite tunes haha. But I started taking it seriously in middle school when we started proper music lessons and thought I’d love to sing for a living.

Your song ‘Lazy’ is so refreshing and honest and something that I feel is really needed right now, when so many people are struggling with their mental health. The song beautifully and powerfully underlines that music can be used to talk about mental health in ways that will resonate with many people and make some not feel so alone. Can you tell us about the process of writing it? What do you hope that people take from the song?

I see music as an escape, and at the time writing ‘Lazy’, a song talking about my depression, felt really cathartic and therapeutic. But first and foremost, I really want people to vibe with the song, I want them to add ‘Lazy’ to their playlists and play it on repeat.

I also wanted to say through that song: ‘You are not alone, you’re not weird and you’re just going through a difficult time and it will be okay’. It took me such a long time to identify that the things I’m talking about in ‘Lazy’ like: isolating myself, using TV as an escape, cancelling plans or stopping answering to my friends, feeling miserable and unworthy were signs of a deeper and serious problem than just a ‘phase’. So I hope, in some ways, it will help other people to understand what they are going through so they can start seeking for help too.

You grew up in Paris and live in London. What impact does location and the place you are in have on your music?

I feel like music trends are quite different in Paris and in London so it allows me to discover more incredible artists that are so inspiring to me, mostly artists coming from the francophone scene like: Stromae, Lous and The Yakuza and Yseult.

Generally, how do you gain inspiration for the songs that you write? Does it tend to be based on your personal experiences and feelings, or is there something else you try to capture? And what role and importance does songwriting have for you in your life?

I definitely write songs based on my own experiences, or people I’ve met…I write about things I care about: mental health, feminism, Black Lives Matter movement, love, friendship…

There’s something really weird I’ve noticed is that a lot of songs that I have written, not really based on personal experiences, happened to predict my future and events that happened after I wrote the song, like I predicted these events or manifested them. It’s cool but also kinda crazy haha.

I was really captivated also by the song ‘LIKEABOI’. Could you tell us a bit about the inspiration for this song?

I love to say this song is a feminist anthem fighting the patriarchy haha! I was dating this guy who said I was acting ‘like a boy’ because I was confident and secure about my feelings and such, as if, these only characterise men and not women… Because he expected me to be ‘needy’, ’emotional’ and ‘insecure’… And so I wrote a song about it, for all the women, fierce and emotional haha!

Through lockdown I’ve been trying to cope by watching American comedies such as The Office and Arrested Development. I’ve got my eye on Bridgerton to start next! Your song ‘Lazy’ mentions in the lyrics being “on season three finale of my show right now“. What shows have you been watching?

Haha yes, Netflix has been a blessing these past months! Right now, I am rewatching Superstore, which is my favourite show, it’s about the lives of people working in a big box store in the US, and it’s hilarious. I’m also watching Ru Paul’s drag race season 13, Kim’s Convenience, Dear White People, a lot of comedies cause I feel that is what we need right now!

What music helped get you through 2020?

Diving back into music and starting working on a project really helped me go through the first lockdown, I was focusing on music 100% and that motivated me a lot. Also my friends and family, Facetime, Netflix, food, rhum, exercising, and realising how grateful I am mostly in these difficult times.

2020 was such a challenging year. How are you right now? How are you coping with everything and the additional impact the pandemic has had on the music industry?

For me who usually juggles having three different jobs and no days off whatsoever, it allowed me to rest a little and it felt nice. Although it did become a little hard to be so still at one point, but once I started having a healthy routine, it got much better.

I obviously miss my friends and family, being able to travel, and I really miss performing too!

Previously you had been performing shows in London, Paris and New York. What do you miss most about performing live?

I really miss the audience, playing music live with other musicians, meeting and chatting with people who share the same love for music.

Overall, what are your tentative plans for 2021?

I’m really excited to be releasing my second EP that will be called ‘Manifesto of Honesty’. It will be a 5 track EP that should be out in June and I cannot wait for everyone to hear it!