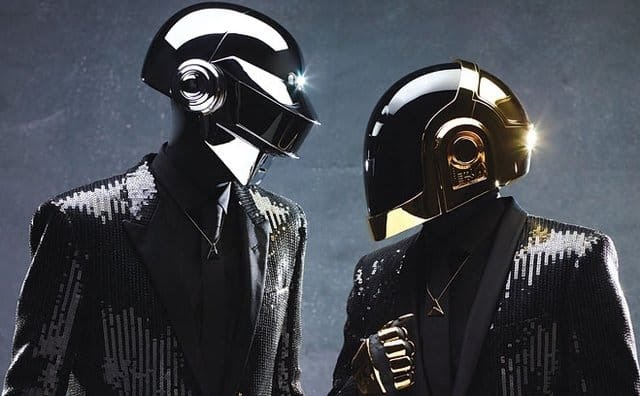 Facelessness. That’s always the problem with dance music. It doesn’t produce stars. There’s no natural spectacle, no way to tie technical proficiency with charisma. That’s not to say in the late 90s there weren’t success stories in dance music: the likes of Leftfield and The Chemical Brothers had hit albums and critical acclaim – but they didn’t become pop stars. Nor did the flash-in-the-pan one-hit-wonder “featured” vocalists of house and garage – a few weeks in the charts, a handful of performances on Top Of The Pops then a quick descent back into obscurity.

Daft Punk weren’t the first to embrace anonymity and self-mythology – but with those robot masks, the duo Thomas Bangalter and Guy-Manuel de Homem-Christo embraced the idea of facelessness head-on, literally. With it, they became music’s biggest practitioners of kayfabe – the suspension of disbelief which creates a world undisturbed by reality. Role-play as performance, but in the French duo’s hands, more than just media image – a fully committed robot portrayal.

Of course, none of this would matter if the music hadn’t been any good. Breakout single ‘Da Funk’ isn’t just a banging acid groove, but in the context of 1996 crossover dance music trends it felt singular – a slow disco tempo in a climate where hard-house, garage and trance were in their ascendancy, based on noisy acidic distortion at a time when EQ’d basslines and piano chords were ubiquitous. Follow-up hit ‘Around The World felt’ more conventional: closer to house’s standard tempos, with the filter effects that came to define the sound of Ibiza for the next decade and a bassline so sassy it demands a strut. But even that was still weird: it still had that monotonous vocodered repetition of the song’s title, broken up with digital blips and rushes. Both hits came with cult music videos: for ‘Da Funk‘, Spike Jonze told the surreal story of an anthropomorphic dog in New york, while Michael Gondry turned Around The World into a choreographed alignment of sound and movement. Big songs, big videos, big backstory: Daft Punk may have been dance music’s coolest name but their presentation was 100% from the rules of pop.

Those rules were hastily rewritten in the years following their debut album Homework. Big-room Ibiza-house was heavily inspired by their mix of booming compressed kickdrums and filter effects, while mainstream pop looked back to disco in an obvious way, drawing from the same supposedly-tasteless sources and production methods that Daft Punk had made credible once again. So when the lead single from Discovery arrived, the giddily ebullient ‘One More Time’, it made perfect sense: brassy, euphoric and perfectly poised between sophistication and cheese, the way that all best disco sounds. Discovery isn’t really a great album – its deliberate tackiness can be irritating – but the opening four songs is as good a run as any band can hope for. The ecstatic ‘One More Time’, followed by the grandiose swagger of ‘Aerodynamic‘ and the sugar rush of ‘Digital Love’, before landing on their finest moment,’Harder Better Faster Stronger’. The song’s title feels like a challenge to the band themselves: to take their already-established style and maximise it, with its beefed-up stuttering groove, mix of squelches and strings, and a spiralling vocoder solo played almost like a hair-metal guitar solo.

The follow-up, Human After All, is considered a bit of a dud – and rightly so. Recorded in six weeks, it’s an album that sounds unfinished, uninspired and unengaged. In 2005, the time of its release, dance music was in great health – the early promise of electro-house was being unlocked, labels like DFA were bridging the gap between the rave and the indie disco, and the sounds of minimal techno in Europe were showing there was still plenty of room to explore in 4/4 grooves. By comparison, ‘Human After All’ is the sound of stasis: its biggest single Technologic hangs a vocal loop similar to Harder Better Stronger Faster‘s, only without the undulating funk and unexpected twists.

In the eight years between Human After All and its proper follow-up, they kept busy with tours and a live album, plus the soundtrack to the updated Tron movie. Career moves like this kept them relevant and added an air of legitimacy: dance acts aren’t traditionally asked to score Disney movies or command headline stages at festivals and shows outside of the dance tent. The cult of Daft Punk grew as their influence became more pronounced, not just in the way top-tier names like Justice and Vitalic borrowed from their stylistic signatures, but as names like Deadmau5 and Swedish House Mafia followed their blueprint of performing dance music like it was rock music crossing over into the realm of pop.

So when their long-awaited comeback album Random Access Memories was announced, it felt like an event. Even more so when lead single ‘Get Lucky’ featured superstar Pharell Williams and disco royalty Nile Rogers. It was a global, inescapable hit. Random Access Memories was acclaimed for its timeless disco pastiche, with fans seeming to over-rate what was essentially a mid-tier Scissor Sisters album in an attempt to atone for the critical malignment of their early material. It’s not a bad album, but for a duo once considered at the vanguard of dance and electronic music, its comfortable retroism is disappointing.

It wasn’t quite the finale: rising superstar The Weeknd collaborated with them on two massive hits, while Kanye West enlisted them for production duties, having already sampled them on his signature hit ‘Stronger’. But this week’s announcement that they’ve decided to end Daft Punk, is as big a deal as any major band splitting up.

Disco is everywhere at the start of 2021. Dua Lipa, Kylie Minogue, Jessie Ware and Roisin Murphy have all been claimed as the resurectors of the sound. But truthfully, it’s never really gone away, and that’s massively in part to the influence of two French robots, who even at their weakest still felt like global superstars. Only rarely, and early, were they really the innovators that their devotees would have you believe. But regardless of their limits as musical artists, Daft Punk understood what it meant to be iconic. They made dance music, but they performed it like rock stars, and in doing so they made disco seem like an intuitive, constant thread in the fabric of pop music.