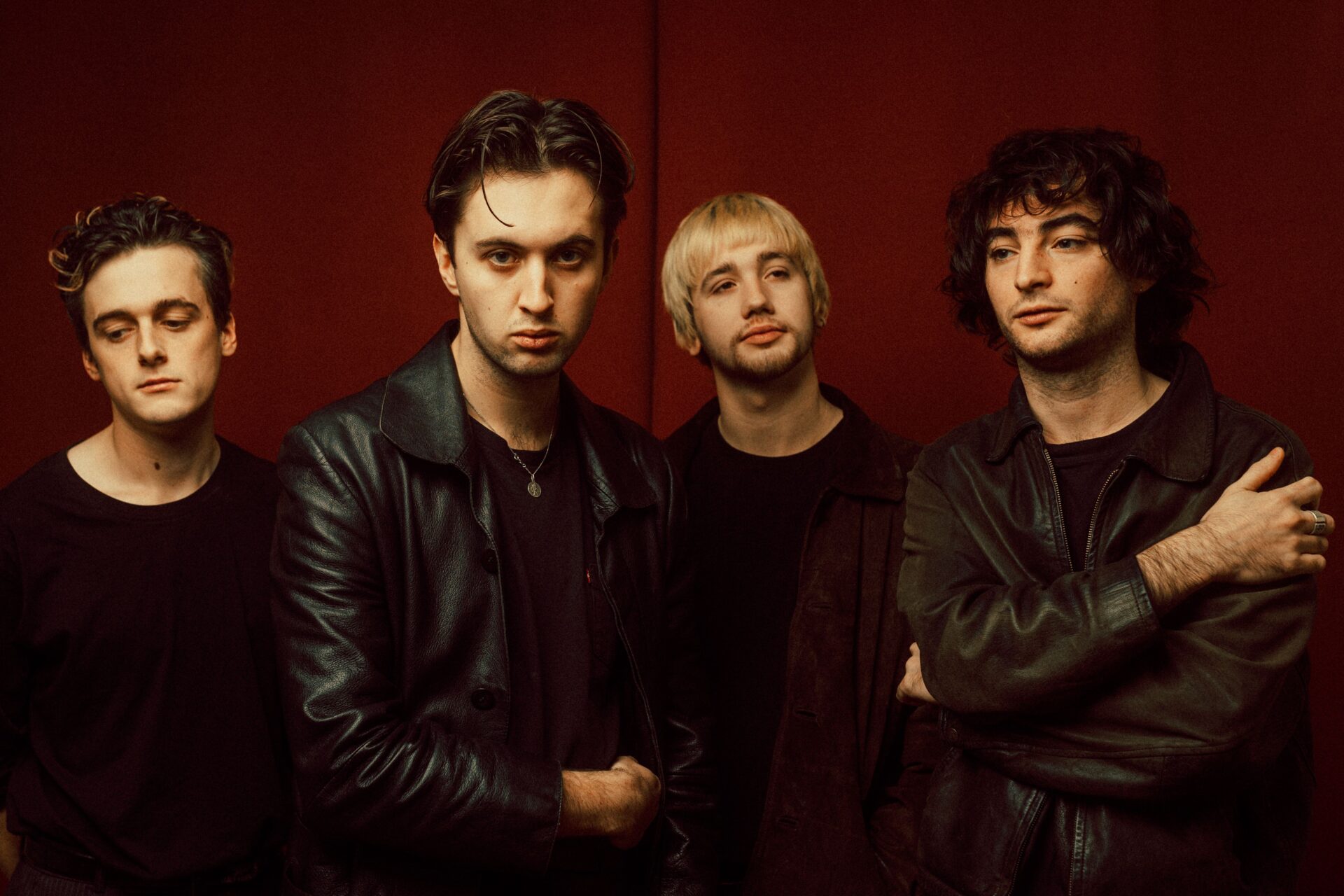 And yet, earlier this month Rhys Underdown (vocals, guitar, saxophone, keys) and bass player Kieran Doe of Bandicoot busied themselves admirably in the kitchen of their shared house in Cardiff, for BBC Horizons on Welsh Language Music Day.

A most entertaining and informative half hour, even for those of us who possess a grasp of only basic greetings and farewells in Welsh.

In all, that week proved to be quite an education at this end. As an innocent who’d never witnessed Bandicoot in action, their set was nothing less than a revelation. The improvisation and chemistry between the four men, harmonies and energy, and the bloody songs, the weaving in of a impressively broad musical palette.

It was notable they showed none of the now familiar ‘dead air’ awkwardness that comes with playing to a room with no paying audience.

Hence this interview speedily booked as a result.

We gather over Zoom on the run up to debut single ‘Dark Too Long‘ for Libertino being unleashed onto an unsuspecting public, a sizeable proportion of whom have no idea they’re about to hear their favourite band for the first time.

Rhys, Kieran, and Tom Emlyn (vocals, guitar, keys), are lined up on a sofa with the Welsh flag pinned on the wall above their heads, Billy Stillman (drums) in his own place not far up the road.

The foursome moved from their Swansea hometown to Cardiff a year ago and it’s fair to say things are going rather well.

‘Dark Too Long”s title on its own feels prophetically appropriate, or timely at least. The band may have been around since school, learning their craft ever since but this release marks a step up on all levels, their recent signing to Libertino no small part of that.

There is a palpable sense of excitement and optimism within foursome and permeating out.

Billy and Rhys are friends from primary, starting Bandicoot in their mid teens, the line-up shifting and changing before the four lads we see before us today slotted into place, feeding into each other’s creativity.

Tom brought with him a love and knowledge of music the others hadn’t all encountered before. A big Scott Walker enthusiast – something which is now  a shared Bandicoot interest.

‘When Tom joined the band we got an influx of recommendations. An amazing digestion of music,’ says Rhys, who credits Kieran  introducing the likes of NEU! to the group, meaning the finished version of the triumphant and defiant ‘Dark Too Long‘, described in a very on the nose manner as ‘half krautrock, half other weird things’ – art rock, glam, 70s rock – is very different to the original demo and idea.

‘Out of that (the NEU! album) came this obsession with these driving riffs and that’s where the idea first blossomed. I got the verse and the hook out of that. We spent hours jamming it, getting the intricate middle bit to work and how to structure it was actually a fun challenge to work out…because we wanted it to be jarring.’

It’s those elements coming together, perfect chemistry. Listening to ‘Dark Too Long’ it feels like Bandicoot are taking on the world. And do you know what? They’re gonna win.

It seems appropriate it’s the first song they collaborated on in the true sense of the word.

‘It’s this great kraut driving bass Kieran has, Tom’s proggy guitar solo riff, angsty lyrics and the drum’s in the build up at the end there’s Bill’s incredible drum fill. Then we all sing along as well, there’s a great moment when layer upon layer upon layer of backing vocal comes in. it’s a euphoric song, to play it live both musically and having four voices on it feels like a real unified moment as a band.’

Keiran is the newest Bandicoot recruit, joining two weeks before the band’s set at Sound City 2019. With a narrow window of time to learn the songs, he crammed as for an exam and on the five hour drive up to Liverpool, Tom frantically went over the songs with him in the back of the van, with unplugged guitars. It was chaos, they say, but a great way to throw him in the deep end. To see if he sank or swam. He’s still here, the other three reason, so the approach worked.

He’s the most physical bass player around, surely, having witnessed his onstage energy at Immersed. The band’s response to seeing him live, “we need some of that!”‘.

There’s a camaraderie and resourcefulness between the four members, onstage and off it. Can’t help but think back to the Welsh cakes, one member getting  his hands floury, the other skillfully used a mug as a pastry cutter, working in tandem. A metaphor for the group’s collaborative approach in the practice room and studio, perhaps? Each man a vital ingredient to forming the Bandicoot vibe.

It happened bit by bit, organically. Tom’s initial suggestion they write a song during rehearsal and work on it together proved to be creatively fruitful.  Fresh input and way of working pushed their sound forward.

‘We ended up building up this catalogue of music we didn’t necessarily mean to be for Bandicoot because at the time Bandicoot had a certain style and sound. We didn’t sing melodic acoustic-y harmony based stuff.  In a band context they’re given a new life again,’ Rhys explains.

‘It’s surprised us a bit, what it’s become,’ nods Tom. 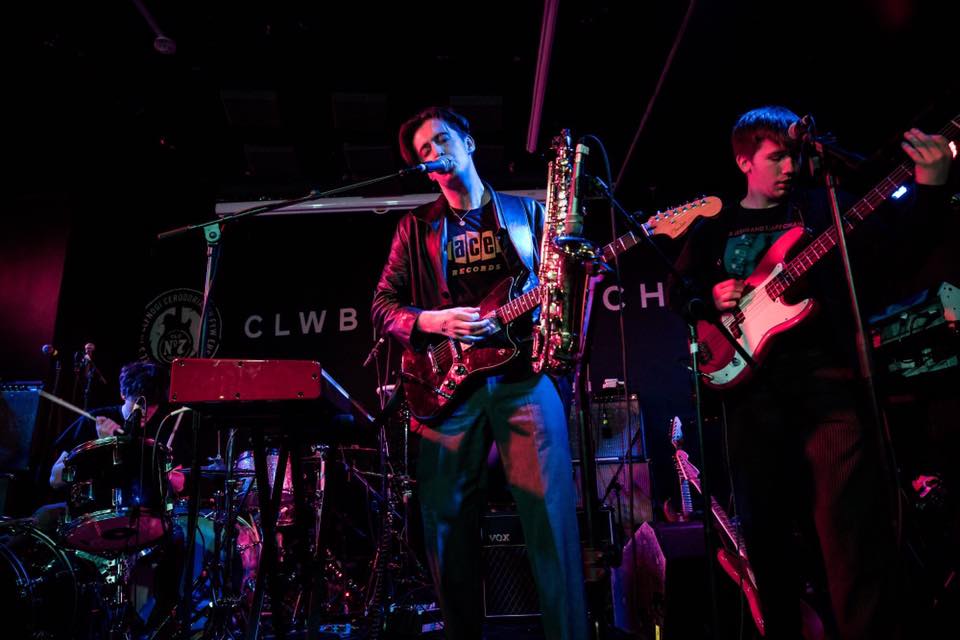 Bandicoot’s Immersed set was impressive in how it showed the band buzzing off each other, Rhys and Tom taking turn to sing lead, sometimes in the same song, Kieran and Billy harmonizing. The flipping between English and Welsh within the same song adds another layer of interest.

‘We translate each other’s lyrics,’ says Rhys. ‘I’ll put Tom’s lyrics into Welsh and Welsh into English and that produced this overlapping dialogue that exists in the songs.’

In Cardiff, Bandicoot have found a home from home at the studio of their producer, Buzzard Buzzard Buzzard’s Tom Rees. It’s another satisfying and productive relationship, Rhys playing sax for Buzzard as and when.

Both Tom and Rhys have both recorded solo albums with him, and Rees’ fingerprints are firm and clear on glam stomper ‘Fuzzy‘, another standout from the Immersed set, and older song given new lyrics and a facelift.

The band talk to me about through the songs from the Immersed set in detail.

The triumphant ‘Bleed Out’ is theatrical and dramatic from the start, launching with ‘oh my god I think I’m gonna to bleed out on the street again’. Bandicoot found themselves this time last year receiving their first national press, Rhys ended up in the Daily Mail after being beaten up on a night out in Bristol, Brexit mentioned in the conversation leading up to the assault.

‘Everyone thinks the song is about that,’ he laughs.

‘Bleed Out’ is another strong example of Tom and Rhys co-writing lyrics, using the ‘unseen poetry’ method. One wrote a line then folded the paper over to conceal the words, then the other writes the next line.

‘So you get these weird combinations of meanings. Bits and bobs put together, it felt right and made sense,’ says Tom.

On the song, Rhys and Tom share vocal duties, taking turns. Not singing in a verse frees Rhys up; instead of playing a solo on the sax sometimes it’s interesting to do an accompaniment to a voice, he reckons.

Kieran describes the song as ‘an exercise in how can we work together in different weird ways.‘

The band may have moved from their Swansea hometown, but affinity to their origins is permanent. Fondness for the poetry of Dylan Thomas, and the essential influence of another fellow Swansea boy John Cale, is evident on different levels.

We talk a little about Velvet Underground‘s ‘The Gift’, with Cale‘s accent so obvious via spoken word.

‘If you imagine what it was like for John Cale in 1962, he didn’t even speak English until he was 9 or 10 then end up in New York playing with John Cage and these minimalist experimental composers and end up in one of the most revolutionary rock bands ever. It’s a collision of two different worlds. I think just the fact of hearing South Walean accent on a song like that feels other worldly it’s not something you expect to hear,’ says Tom.

‘For someone to go there and make such a big thing of themselves,’ agrees Rhys. ‘I don’t think the Welsh are known for doing that historically, take things quite modestly and don’t really shout about themselves. John Cale is such a refreshing change. It’s really inspiring and influential.’

‘Dark Too Long’ is out on Friday, and picking up airplay already. A Saturday night spin on BBC Radio Wales lead to a diplomatic incident in the shared house when a cherished vintage glass lamp got smashed in all the excitement. That exuberance is not confined to breaking nice ornaments, thankfully. We’ve got online Bandicoot performances to look forward to in the next weeks.

They play an an acoustic set for Ty Pawb on March 5, part of St David’s Day celebrations, and the Gŵyl 2021 festival 6-7 March.

‘Since the very beginning we’ve been quite energetic onstage there’s no more reason that just the fact we love it,’ sums up Billy. ‘We have so much passion for it. Now we’ve got Tom and Kieran who love it just as much as Rhys and me, it’s grown into something stronger and stronger.’

Something tells us the next time they get national coverage, it won’t be about fisticuffs in a random city street. This is Bandicoot‘s time.

‘Dark Too Long’ is out via Libertino on 26 Feb.