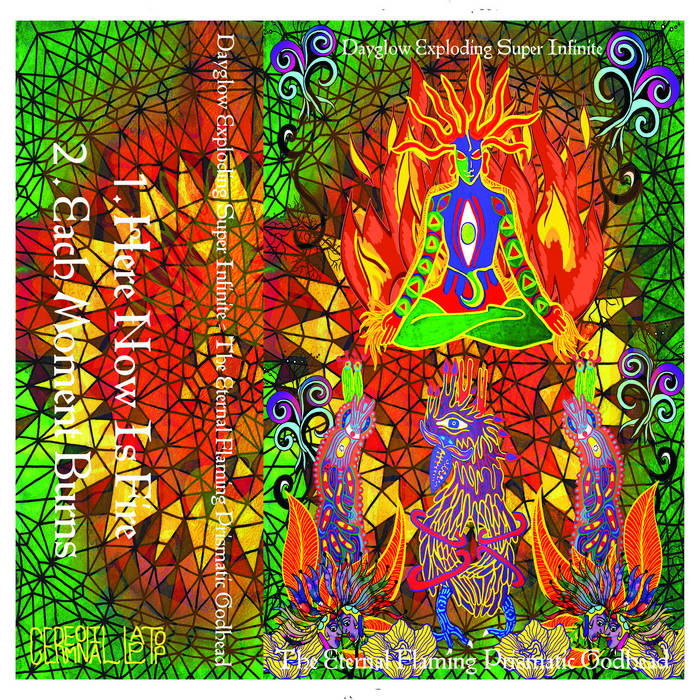 It’s hard to know how many albums Karl Waugh has actually released. If you were to ask him, he’d probably give you a ballpark answer, or maybe even quote you from Kes Gray and Jim Field’s book ‘How Many Legs?’ “If you lose count don’t feel bad. A sum like this could send you mad. No need to tie your brain in knots. Let’s just say the answer’s lots”. And lots feels like a safe answer. But now that total is lots plus one as Waugh has another notch on his musical tally chart with The Eternal Flaming Prismatic Godhead recorded under his Dayglow Exploding Super Infinite moniker, released through Ceremonial Laptop. Like a lot of Waugh’s releases this has a slightly psychedelic lean to it, but if you are expecting The 13th Floor Elevators or something guitary, think again. This is more of a noisy, drone filled affair.

The album opens with a huge sounding synth slightly submerged with a skittering wall of feedback, noise, and general musical detritus. It’s great. Instead of allowing us to hear the glorious melody, Waugh has obscured it. When we do catch a few moments of it we have to make the most of it, as it will be obfuscated almost immediately. If ‘Here Now is Fire’ was a musical game of hide and seek, ‘Each Moment Burns’ is more conventional. The noisier elements are still there but not they are hidden by huge drones and basslines. As the song progresses Waugh really starts to let rip and creates a delightful wall of feedback, unintelligible vocals, and electronics. At first it starts to build slowly, almost glacially, but there comes a point around the halfway mark when you have a double take and say “Wait, how did this happen?”. From this point until the end, you are being slowly drawn into the sounds of a ruinous rapture.

The most remarkable thing about The Eternal Flaming Prismatic Godhead is that it was recorded in one take. Everything live. When you relisten to the album after that nugget of truth has sunk in, everything takes on a whole new light. Throughout the vibe that Waugh has gone for is noisy devotional. This kind of works. The opening to ‘Here Now is Fire’ has a large church organy feel to it. But this is no sermon I was ever taken to as a child. Maybe if this is what it had been like I might have been into going for longer. This organ is hidden under layers of noise, effects, scratchy sounds. The combination of these two schools of thought, quietly contemplating and fidgeting noise, works quite well. It sets up an agitated feeling of calm and jittering restlessness. The downside is that after this juxtaposition has been established, there is extraordinarily little variation and conflict. It’s the same kind of sounds running over each other for 15 minutes. That isn’t to say that the album isn’t enjoyable. It is. But after Waugh sets everything up, it pretty much stays that way until the end.

What The Eternal Flaming Prismatic Godheadsuggests, is that after lots of albums Waugh still has plenty of ideas left and in Ceremonial Laptop, he has found a home that suits this kind of music. Being the labe’s first release of the year, they are also making a statement. A statement that says they aren’t going to sit on their laurels. They, like Waugh, are going to push themselves, their artists, and their listeners. The Eternal Flaming Prismatic Godhead is an album to get lost in. It’s also an album to get found in too due to its densely layered production. Six listens in and I’m still finding new things that excite, terrify and elucidate. The project has always been about using experimental aesthetics to create a joyful noise rather than something nihilistically negative. And he’s done it again.