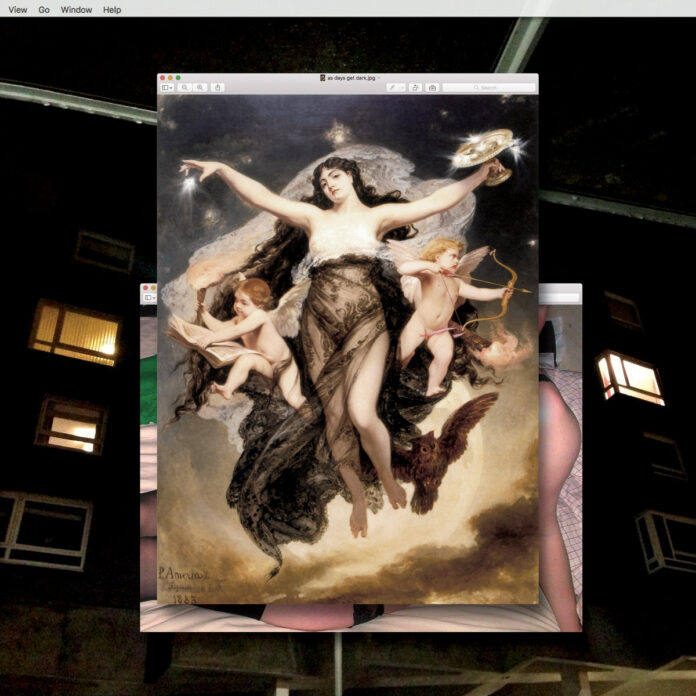 ‘What would you call the opposite of a comedian?’ asks Aidan Moffat at the mid-point of As Days Get Dark. ‘Whatever it is, that’s what I wanted to be.’ Looking back over his life and career as one half of Arab Strap (with multi-instrumentalist Malcolm Middleton), he describes how he had envisioned touring the country recounting tales of woe from a big leather chair, like an emotionally devastated Ronnie Corbett, the audience all weeping along with him. He’d even thought about the merch, ‘A hundred per cent cotton souvenir handkerchiefs, embroidered with tour dates’. It’s very droll.

But like many a good joke, it tells us one truth only to deflect us from another. Perhaps it’s the T.S. Eliot idea about the gulf between thought and expression: ‘Between the motion / And the act / Falls the shadow’. Because there’s another good story, tucked away in the gloom at the end of the record, in which Moffat describes an overnight train journey. He doesn’t say where he’s going, but the little details mount up with eerie effect – it’s like one of those weird tales by M.R. James or Robert Aickman where the quotidian unexpectedly twists into something irrational – the unseen landscape scrolling by, the haggard faces of his fellow passengers, the too-perfect nuclear family waving from the platform. There’s a barman in the club car who gives him free drinks, ‘He says he knew that I was coming / he’s an old friend of the family / I might not know him / but he knows me’. It’s very Overlook Hotel, the menace emphasized by the sinister electronic drone behind Middleton’s remorseless, precisely winding guitar line. And where are you going? Are you going home, or only onwards, into the dark. Were you always destined to arrive here, or have you, as they say, always been the Caretaker here?

These then, are the questions that preoccupy us coming into Arab Strap’s first album in, ooh, about a bajillion years. Are we going forward or are we going back? Returning to their first LPs over Christmas, as one does in lockdown when one is alone, all alone, I was reminded of all that stuff from the ‘90s – all that drinking and shagging, ‘the biggest cock you’ve ever seen’ and ‘New Birds’ – and two thoughts struck me. Firstly, oh my, didn’t things run pretty high in those days? Honestly, kids today think they invented it. Then secondly, in a weird way, that Arab Strap were very much of a particular cultural moment, far removed from the preceding hedonism of rave and the twin cancer of lad’s mags and Britpop, but mutated by the fall-out from these entities nonetheless (I firmly believe that Britpop literally causes cancer and can’t wait to argue with you all on Twitter about that) – and don’t forget, these were the days when you could walk into a pub and drink to get drunk without needing a second mortgage. You could even, on a good day, actually get a mortgage. And there was no Tinder. If you wanted company, it took a very different skill set to find it. Simply put, can we – should we – still be carrying on like that? In 2021? At our age?

As Days Get Dark starts in the most Arab Strap way it possibly can, with a wonky guitar loop and rising strings over a drum machine. Then it all pauses and there’s a moment of suspense before everything kicks back in beneath an opening lyric that muses over the wee mole on a lover’s thigh. Its familiar territory, both the music and the mole, since we’re quickly apprised of the subject matter. ‘The Turning of our Bones’ is about seducing someone you’re growing old with, someone you’ve been with a long time, and how you’ve both seen better days – Moffat plays this as a bawdy domestic comedy, proclaiming that, ‘my confidence might crumble / but my brio is unbroken’, before embarking on a ludicrously detailed catalogue of the ravages of time.

But there’s a twist coming. Just as you’re rolling your eyes at how the boys from the Strap haven’t changed a bloody bit, they hit you with a bit of bloody Jan Hammer. And a sax solo. The slick pair of motherfuckers have littered the album with these momentous touches, as though, in mapping the contours of desire they’ve inadvertently resurrected the dread spirit of a yuppie ad man’s idea of desire, all lurid neon and sprayed-on sweat. And they’re totally in earnest – it’s often like listening to Arab Strap reimagined as a mid-80s Ridley Scott thriller – you can hear it in the sax and strings that haunt the protagonist of ‘Kebabylon’ on his nightly investigations, in the goth rock opera that churns behind ‘Here Comes Comus!’ and the Berlin-period disco architecture of ‘Compersion Pt. 1’.

Musically, Middleton and Moffat have pulled it off. They’ve made something instantly recognisable as Arab Strap – they’ve still got the chops for those awkward time signatures and eerie tunes – but it’s very much it’s own thing, with a bigger, triple-A sound. There was always something perverse about them, as though they were striving to point up the artificiality of the songwriter’s craft. The flinging together of crude, downbeat electronica with unsettling, minimalist folk could be quite forbidding. Perhaps that was an effect of how different they were to everything else in those days, and it’s just that the world has caught up, but As Days Get Dark is a hugely instantly gratifying record.

Above all though, this is a record imbued with the demonic – it’s full of ghosts, lost souls, the less reputable Greek gods, and ‘the puckish promise of a bended knee’. All the things that eternally lurk behind what we think are our motives. It could come across as a bit of a cop-out, as yet more folk horror, but Moffat’s chronicles of toxic masculinity continue to be unflinchingly specific. There are clearly, for example, more earthly forces directing the sociopathic philanderer of ‘I Was Once a Weak Man’. An eye for a telling, unbearably vulnerable detail has always marked Moffat out as one of our best lyricists, but you can feel a lifetime of reading has also gone into this – an erudition that makes something like ‘Here Comes Comus!’ more than just a hit-job. As Days Get Dark is a brilliant, complex return.