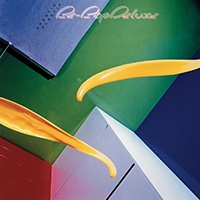 Continuing the reissue series of the band Be-Bop Deluxe, Esoteric Recordings, with Cherry Red, are continuing to bring back to the market their back catalogue. Having already re-imagined their 1976 release Modern Music with a raft of bonus content, it is now the turn to do the same with the 1978 release Drastic Plastic. This time the band’s founding member Bill Nelson has worked with the label releasing this as a double CD and 6-disc Limited Edition boxed set. This classic last studio album has not only been remastered from the original master tapes, but has been reimagined, creating a new-stereo mix that accompanies the original. Bonus content across these two releases includes previously unreleased Bill Nelson demos, A BBC Radio John Peel Session, and the Sight & Sound In Concert performance for the station in January 1978.

I’ve been given the opportunity of taking a listen to this double version of the album, which not only includes both the original and new-stereo mixes, but also an additional 14 tracks of B-sides across the two discs. Of this process, I would comment that it has opened up the sound, providing a far greater depth, picking out elements that weren’t there before, or at least couldn’t be heard. In the opening track, ‘Electrical Language’ this process has drawn out the sound, creating a far more engaging aspect.

Known as one of the prog-rock crowd, Be-Bop Deluxe was a 4-piece, with Nelson responsible for songwriting duties, although worked alongside Andrew Clark (keyboard and synthesiser) to bring these to our ears. By 1978, the band comprised Simon Fox, who had been responsible for drums and percussion since 1974’s debut album Axe Victim and Charlie Tumahai on bass, recruited for the follow-up album Futurama. Recorded at Juan-Les-Pins in the South of France, this stellar cast of musicians played on what would become there final album. Be-Bop Deluxe was about to take what was quite a diversion from there earlier work. At this stage of their career, this prog band was in a sea of influence coming from Punk and New Wave. This new vision of Drastic Plastic has produced the album I am hearing and is a fitting swan song, comprising deep and expansive sounds that leap from the playback. ‘Surreal Estate’ is one example of rock with progressive tendencies. One whose sound stage is of immense proportions and on this newly remastered version shows off it’s best side. It has a new life, okay so it’s roots are certainly in the seventies, but you’ll feel that you’ve somehow put Calgon in your stereo.

Someone more than just a musician from Yorkshire, Bill Nelson has many strings to his bow. He was someone who embraced pushing the boundaries of what sound could create, being described as an experimental musician and this is something he refers to in the essay he wrote to accompany this release. In this he makes speaks about his use of a Mini-Moog Synthesiser which he interfaced with a Hagstrom Patch 2000, one of the very first synth guitars, to create the basis of some songs that found their way onto this album. I guess it was a case that you had to be there, but the next closest example would be to listen to this album and experience for yourself exactly where he was coming from.

But way-out sounds aside, even the acoustic instruments here sound as if they are from another world. Take the drum introduction on ‘Love in Flames’ and I’m sure you will have no problem appreciating their impact and tone before Nelson’s space-age instrumentation takes this number into another galaxy. So he sings, “…I love you like the movies, I love you like the TV, I love you when your classy and I love you when your sleazy…”, imagine going down the visual tunnel of a Tom Baker episode of Dr. Who and this bears the psychedelic wizardry of this era. I can’t say to you that this album is all high energy ’70s psychedelia, as there are moments of cigarette-stained lounge music, certainly in the form of ‘Islands of the Dead’, which on this new version shows the calibre of guitarist that Bill Nelson is. His solo career to date, eclipses the minuscule element that Be-Bop played in his profession, but as a starting point this album demonstrates extremely well just the kind of musician that he is. For both, the fan, observer, and someone interested in music, as an album Drastic Plastic, and this version in particular, is an excellent starting point to a band whose reach will continue long after we all have gone. Great artwork too.