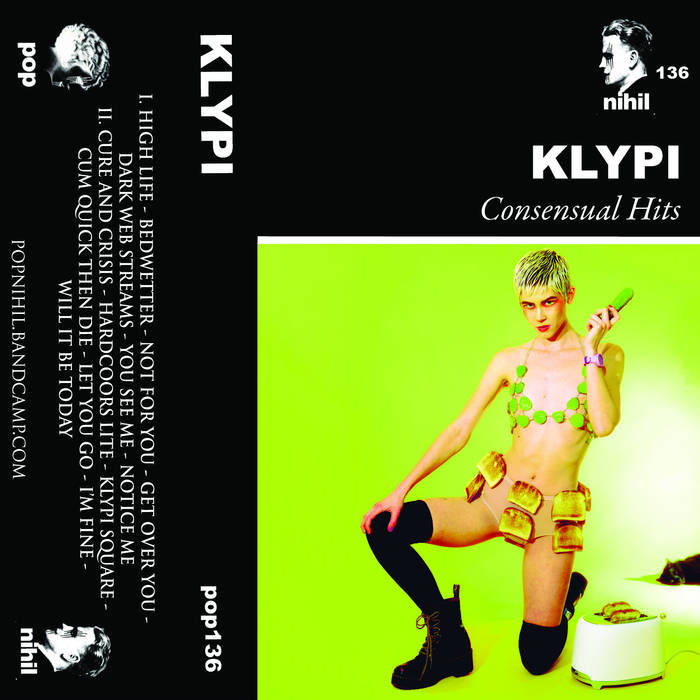 In the world of pop there is a trend for everything to be produced to the Nth degree. Vocals. Beats. Basslines. Everything. When it works, it is the best thing in the world, and when it doesn’t it really doesn’t. One artist who is going against convention, again, is Klypi.  Previously, Klypi’s singles ‘Get Over You’ and ‘I’m Fine’ were deliciously delightful stabs of Queer Pop. Off-kilter melodies, bombastic beats and throbbing basslines were the order of the day. Now Klypi has returned with a debut album that builds on these foundations, whilst delivering so much more.

“I’m living the high life, though I’m a lowlife. I’m living the high life. Red wine on ice” kicks off the album before industrial beats and pop synths explode from the speakers. ‘High Life’ is the perfect
introduction to not only the album but the artist. It says it all.  Living as large as you can, despite your pay-packet.  Unapologetic about whether you find that appealing or not.  If so, go away, you are annoying. The standout track on Consensual Hits is ‘Hardcoors Lite’. It opens with nursery rhyme melodies that gradually build to an apex of pop delight.  Lyrically, this is not for kids. It’s a song about sexual trysts, break-ups, and living the best life you can.  Klypi is unapologetic about any of this, and this is why the track works. Like the album, everything is laid bare and if you like it, cool. And If not, move along.

The downside to Consensual Hits is the lack of variation.  All the songs sound, well, kind of the same.  This is fine at first.  There is a wonderful lo-fi charm to them that really works, but by ‘Cure and Crisis’, it all starts to blend into one.  I’m not saying that Klypi needed to have a punk track to break things up, that would be even worse, but as all the songs have similar melodies, basslines, BPM, and tones, it would have been good if they could have been shaken up a bit.  Saying that, however, track for track, individually speaking, it is one of the most enjoyable albums I’ve heard this year.  However, when played back-to-back, all that good work starts to get lost.  Consensual Hits is a fantastic introduction to a fascinating artist who has years ahead to hone their craft and release that seminal album.