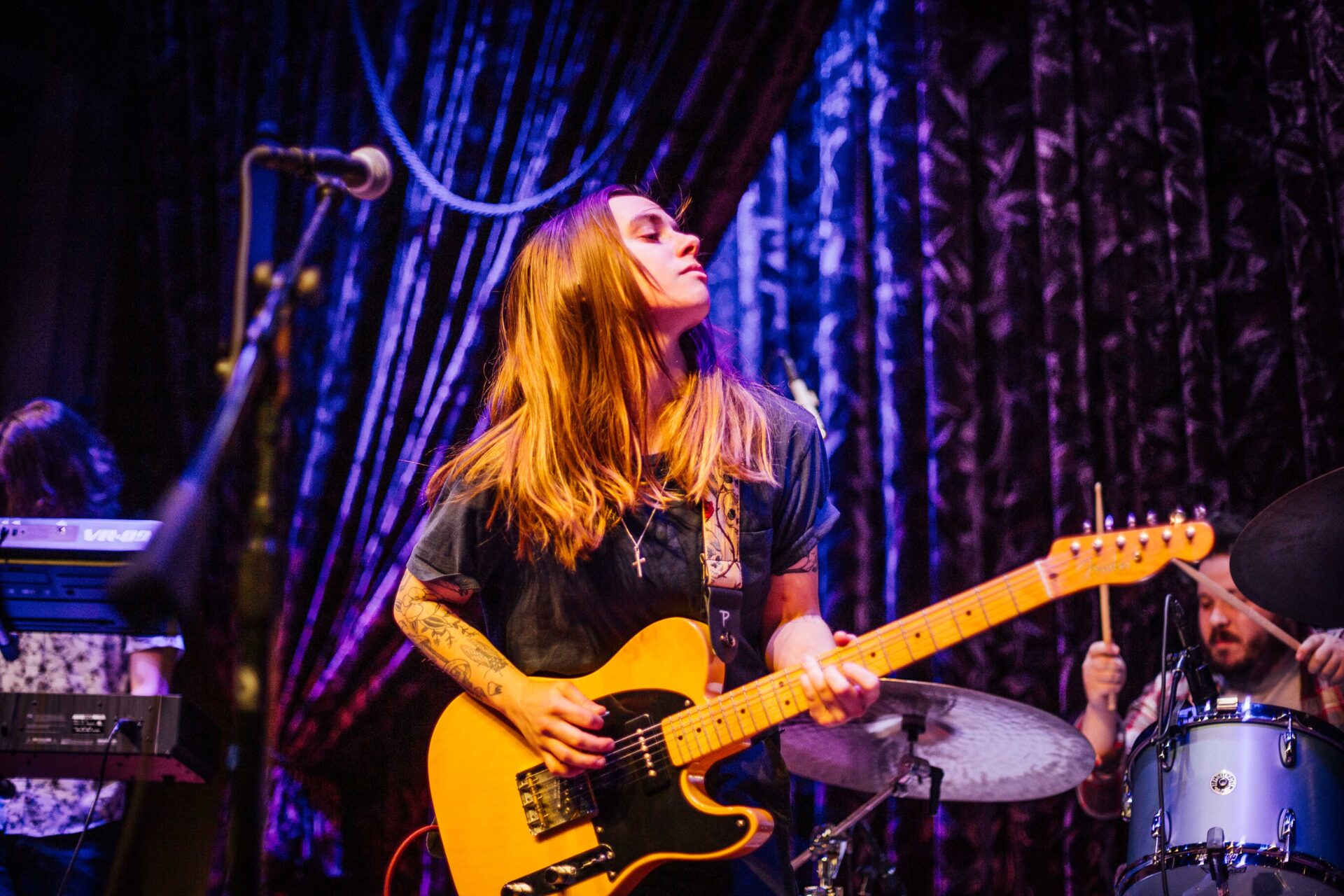 Since the release of her debut album, Sprained Ankle, in 2016, Julien Baker has forged a strong reputation as a live performer. In fact, it was an online performance that first drew me into her music, as part of the Tiny Desk series on NPR in March 2016. Her use of loop pedals and reverb guitar and keyboards, alongside her powerful but also sometimes delicate vocals, makes her a compelling and remarkable performer that can strike deep emotion in the audience.

Baker’s latest album, Little Oblivions, released in February via Matador, featured a full band, and this concert at the Hutton Hotel, Nashville, was her first full length performance with this new group. I attended this online performance with much anticipation – I was hugely excited to see how the band would perform these new songs together from the album (my favourite so far of 2021), but I was also very curious to see what it would be like to experience an online concert, since it was my first that was ticketed and presented in a similar manner to a standard concert.

Support at the concert came from Mini Trees – the Los Angeles based indie project of Lexi Vega. I really enjoyed their four song set. I wasn’t familiar previously with their music, but it made me seek out their 2020 EP Slip Away, which is fantastic. It also worked really well to have a support band, which made it feel even more like a concert experience.

Overall, Julien Baker’s set worked remarkably well to bring the songs on Little Oblivions even more to life. These songs in their live form cut even deeper, leaving their mark on your heart. For example, the first part of her set opened with ‘Faith Healer‘ the first single from the album. The sound was so loud and clear, and this beautifully complemented  the soaring ending. I remember that when the song was released I was a bit underwhelmed, but it gradually grew on me, and this live version emphasised just what a compelling song this is.

Other highlights from the first part of the set included ‘Favor‘, my favourite song from Little Oblivions. The rhythm change a few minutes into the song was even more affecting live. ‘Hardline’, also brought another stand-out moment – when Julien Baker sings “Oh, it isn’t black and white/What if it’s all black, baby?/All the time/All the time” and the music swells higher and higher, with the repeated “all the time”.

The two tracks performed that weren’t on the new album were also striking. ‘Turn Out The Lights‘, the title track of Julien Baker’s second album, was so moving. I felt every word. ‘Tokyo‘ – a song that does not appear on any of the studio albums, was also a great surprise. It got me thinking too about the power and impact of these online performances. If I was in the same room as this performance, the sound would envelop me. I would feel the beat in my body. Online performances cannot offer this sensation, but they can still deliver an emotional and meaningful experience.

During the middle of the set the band went off for Julien Baker to play ‘Song in E‘ solo on the keyboard and this was another highlight of the show. The performance was raw, intimate, and the core of the lyrics packed their deep punch: “Oh, I wish you’d come over/ Not to stay, just to tell me that I/ Was your biggest mistake to my face/And then leave me alone/In an empty apartment, face down in the carpet/I wish you’d hurt me/It’s the mercy I can’t take”.

The concert ended with ‘Ziptie‘, which is also the closing song on Little Oblivions. The song questions “Oh, good God/When you gonna call it off?/Climb down off of the cross/And change your mind?” and ends in a frenzy with Baker headbanging and gripped by the music – a perfect ending to the show.

Overall, the addition of a full band to Julien Baker’s music works so well. She is brilliant as a solo performer but bringing in a full band delivers a further fullness to the sound, and just injects a new energy that feels right just now. Matthew Gilliam’s drumming, for instance, is highly passionate. Overall, this concert demonstrated that Julien Baker is a highly compelling and impressive live performer and this online show was an excellent showcase of the new album and its beautiful, moving, and stirring songs. As one attendee stated in the chat box: ”can’t wait to see this live one day!!!” and I couldn’t agree with this sentiment more.