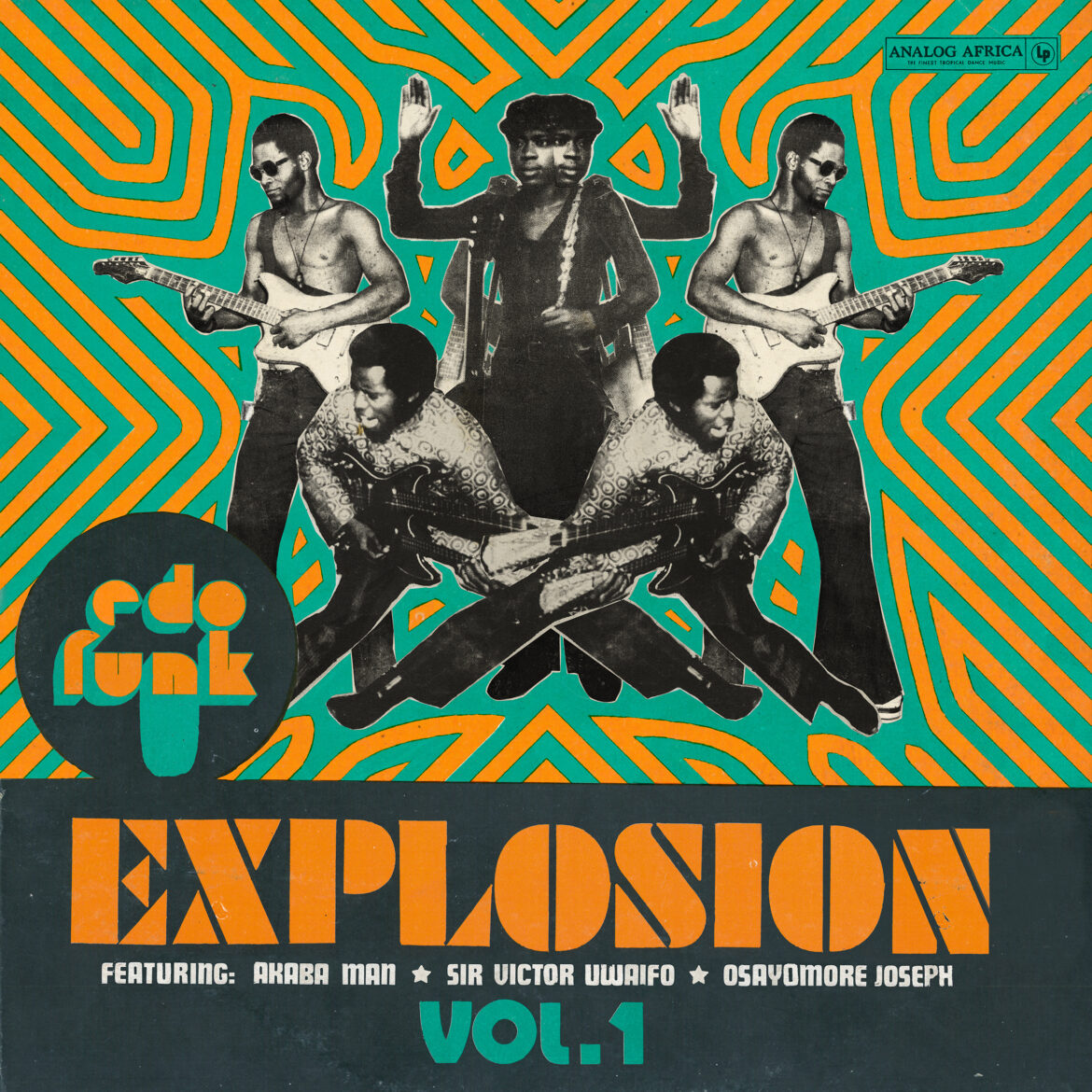 Nigerian Edo Funk, as presented in this impeccable compilation from Analog Africa, is a mixture of afrobeat, disco, and funk, tinged with overtones of reggae, and incorporating traditional Edo languages and instruments. In contrast to the slicker Lagos highlife sounds a couple of states west of Edo state’s capital, Benin City, the music is characterised by sparse, repetitive arrangments which call to mind minimalism and dub. The Benin City of the 70s and 80s was oil-rich and enjoying a period of stability following the end of the civil war in 1970 – audiences there were cosmopolitan and adventurous and wanted highlife grooves with a twist that combined local styles with an international vibe.

Eschewing the scattershot approach of your average compilation, Edo Funk Explosion Vol. 1 shines a light on three of the era’s biggest stars, presenting a portmanteau of the work of Sir Victor Uwaifo, Osayomore Joseph and Akaba Man. In many ways it’s a journey into a vanished, vanishing world – the informative liner notes compare the elegance of the 70s architecture with the pretentious villas favoured by today’s affluent classes and reflect on the contradictions of a country coming out of civil war and suddenly awash with foreign cash. A newfound self-confidence was tempered by inevitable political corruption and anxiety over how to express a modern, distinctly African sensibility.

You can hear this in the first track, ‘Africa is My Root’ by Osayomore Joseph and the Creative Seven, with its mocking chorus, ‘You are dancing like a white man / you are dancing like a fool’. And with such a timeless opening sentiment it hardly matters what the rest of the LP is like. Genius. In context, the song is making a serious point about the social mores of post-colonial Africa and about encouraging an authentically African sense of self-confidence in throwing off the trappings of a foreign, exploitative culture. Out of context, I’m like totally guilty as charged here.

Joseph is cast as the political conscience of the album. A flute player, his future career was seemingly decided by an early formative encounter with Fela Kuti. Although no recordings of the two playing together survive, Fela was an admirer of Joseph’s playing and seems to have inspired the younger artist’s forthright political stance. Returning to Benin City on a mission to funkify his hometown, Joseph’s lyrics lay into government corruption and constantly return to the racist legacies of colonialism. His skewering of the dictatorship in the 1990s saw him vanish into Nigeria’s prisons for weeks at a time.

Osayomore Joseph is not a subtle man, and so much the better. ‘I am the minister of peace / the minister of criminals / the father of the devil’ he sings on ‘My Name is Money’, over a languorous rocksteady beat. It’s hard not to like the guy.

The dub influence is heard most clearly on the outstanding ‘Sakpaide No. 2’ by Sir Victor Uwaifo and his Titibitis. A titibiti, fact-fans, is the Edo name for the bee hummingbird (why, what did you think it meant?) It’s the smallest bird in the world and its cleverness has earned it a place in Edo mythology as the king of the birds. Anyway, ‘Sakpaide No. 2’ is utterly gripping stuff, full of the offbeats and tension and the expansive echo you associate with dub. There’s more though – Edo Funk is never just one thing – the rhythms and textures are so layered with whacky, improvised touches within these minimal parameters that you could easily mistake this for Can if it wasn’t for the edgy, staccato energy behind those horns.

Uwaifo, regarded as the most innovative musician of the era, is a synesthesiac who sees music as shapes and colours and was influenced by the rhythmic patterns of brightly coloured Akwete textiles. Edo Funk focusses on his work from 1978 onwards when he was fully ensconced at Benin Cities Joromi studios and able to play with all the latest synthesisers and effects. Dip into the instrumental bits of ‘Iranm Iran’ for a sense of the guy’s studio chops. Electronic effects warp the horns, rhythm guitars and organs into something unique – a cheeky liminality between cold studio trickery and the thrill of performance.

This sense of playfulness can also be found in the songs of Akaba Man, chock-full of exuberant and unexpected noises. Akaba Man’s work is preoccupied with finding a spiritual dimension to a disco beat – the cover of his most famous album, Obo, shows him carried down from on high upon an enormous supernatural hand. He’s got a more soulful thing going on as a vocalist compared to Joseph and Uwaifo, and a smoother command of melody which more than makes up for the relative lack of drama in the arrangements and production. Arguably, his music is the most direct and the most in tune with its Edo roots. In ‘Ogbov Onwan’, every detail is at the service of the song. While I couldn’t pretend to have much of an idea what he’s talking about, there’s no doubting how it comes over at gut level – from the opening guitar riff to the opening up of the melody into the jams that propel us from one verse to the next – this is killer stuff.

Picking out a trio of artists like this works well, enabling a deep dive into their scene and drawing out all kinds of interesting points of continuity and difference that a wider selection of voices might obscure. And as you’d expect from Analog Africa, this is a ridiculously good stack of tunes. An essential compilation and hopefully the first of many.