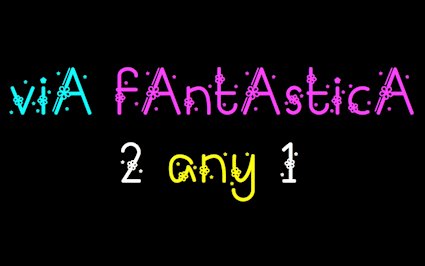 Original ideas, or even unprecedented combinations of existing ideas, can sometimes be hard to come by in this age of oversaturation. Reading Cardiff-based viA fAntAsticA’s press release, which lists primary influences as divergent as Yazoo and Buscabulla, I knew I was in for something unique. The human / droid duo’s debut, 2 any 1 is an aural travelogue of sorts, a 21-track dash through space and time, a multi-cultural tour of electro motifs past and present. Some tracks, such as “Swim-up Bar Blues”, hint at beachy getaways (remember those?) through recurring samples of waves lapping the beach and travel show snippets on Acapulco. This particular track is a found sound, field recording, and old-skool electro pastiche, and deftly showcases Justin Toland’s strengths as both a found sound excavator and electronic music enthusiast.

In a time when venturing too far outside has become increasingly trepidatious to many, having music that casts such a wide net offers a particularly alluring means of escape. The presence of the pandemic isn’t entirely absent from 2 any 1, however. “Day After Day”, feels very much a reaction to the past year; in both its atmosphere and lyrics, it embodies the uncertainty and strangeness of these current times. Toland’s use of a droid vocalist, Gaia de Voxx, speaks to how alien things that were once thought of as creature comforts sometimes feel. It’s a surprisingly emotional vocal take for a droid, to boot.

Yet, more than anywhere else, 2 any 1’s heart is in Wales. This much can be gleaned through song titles alone – “Row Town” (referring to the Roath district of the city), “Meet Me at Sidoli’s”, “Agents of Change (Save Guildford Cres)”. This melding of the exotic and the spirit of community give 2 any 1 a vibe that could best be described as “Wales goes tropical”, which I would argue is a previously unheard of combination.

2 any 1 was somewhat cheekily named as such because, to paraphrase the press release, it is being released in ‘2 to anyone 1 who is listening. It may be increasingly hard for smaller bands to be heard out there, but the more jaded among us might benefit from this spin around the electro globe.