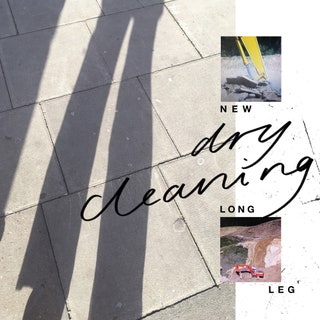 Dry Cleaning’s guitarist, bassist and drummer had been at it for the last 12 years, making music in various bands.  Thanks to a mutual friend they were introduced to Florence Shaw, a visual artist and drawing lecturer who started contributing her words to the project, reading them out as poetry in her eerie, funny, inimitable way.  They sensibly made her frontwoman.  With Shaw, Dry Cleaning has become not just an itchy, melodic post-punk act (which is enjoyable in and of itself) rather something totally distinct from their contemporaries.

Shaw is not the first prominent artist to do something like this, you could recognisably trace back elements of her approach to Patti Smith or John Cooper Clarke.  Unlike Smith and Clarke though, words come out of Shaw’s mouth in an unpredictable fashion.  She is precise in her randomness, mostly ignoring verses and choruses without ever being anything less than perfectly in tune with the music that surrounds her.  The lack of choruses doesn’t make her performance any less sticky either. ‘Scratchcard Lanyard’ is positively catchy with Shaw’s stream of consciousness, angular vocals riding the propulsive wave of bright, rhythmic bass and shimmering, bending guitars.  “It’ll be okay, I just need to be weird and hide for a bit/ and eat an old sandwich from my bag.”

I love lyricists who are comfortable with the mundane.  There is a lot of humour to be derived through describing people’s everyday experiences and clashing them against comparatively spectacular, energetic rhythms.  In the 60 years of popular music an incredible proportion of lyrics have been centered around easy themes of love, loss and partying.  It’s a relief to hear a band instead glamourising a series of seemingly drab but actually far more intriguing snippets of thought.  “I’ve been thinking about eating that hot dog for hours/ kiss me.”

The title track is a favourite of mine with a tense, drawn out intro which explodes into a clattering guitar riff and features the only thing approaching traditional singing on the album, a brief, low key “doo doo doo”. I  love the way Shaw stretches out the words “you are” so you can hear the creaking vocal fry in her voice.  It wouldn’t occur to most singers to use these kinds of textures, instead shooting for something more archetypal.

Perhaps the most surprising thing about Dry Cleaning is that they have managed to mould their highly artistic, uncompromising approach into an accessible, eminently listenable package.  They have both found their unique voice and successfully communicated it in a way that could reach a broad audience.  For this reason, it is delicious when the group temporarily lets the more experimental side bubble to the surface for an abstract, caustic and elongated section of final track ‘Every Day Carry’.  When this unorthodox instrumental break finishes Shaw hilariously bursts the tension in the track with the words, “now it seems like none of that meant anything.”

If you love any track on New Long Leg, you’re bound to love the whole thing.  The end result is so unique and detached from current trends that anyone who fails to listen to Dry Cleaning is missing out on something they won’t be getting anywhere else in their musical diet. The fact this is a debut opens up the exciting potential that this may be the first release of many. I can’t wait to hear where this group goes next.

New Long Leg is out now on 4AD.