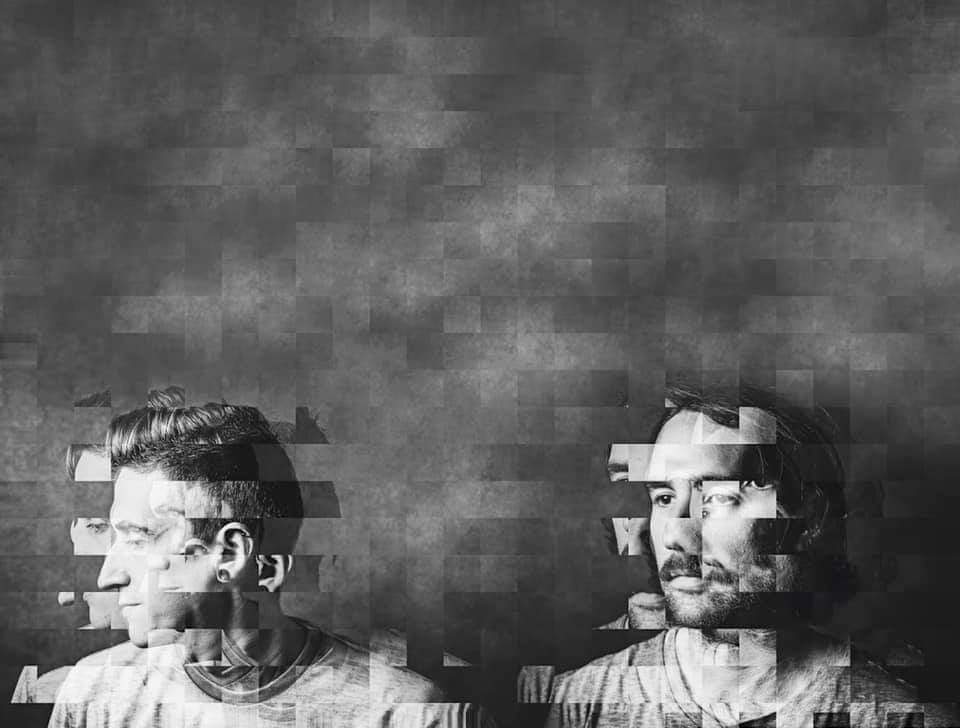 Ritual Cloak recently released their awesome second album Divine Invasions on Bubblewrap Collective. An ambient
suite of enveloping soundscapes that skirts the lines of techno, post-rock and electronica. Swelling with evocative intricate textures of synth, pianos, live drums and instrumental sweeps, its an impressive and cinematic kaleidoscope scope of affecting sounds; you can hear elements of Kid A era Radiohead, Vangelis, The Orb and Boards of Canada, but retains a heart that’s all their own.

Ritual Cloak is comprised of Cardiff based Daniel Barnett, formerly of the band Samoans, and drummer / producer Andrew Sanders. The duo met in 2013 after Daniel answered an ad for a guitarist to join the backing band for singer Jemma Roper. An instant kinship was struck, with both Daniel and Andrew embracing experimentation and a shared love of electronic music. After the split of Samoans in 2018, the pair began playing around with instrumental textures and piano-led ambient soundscapes, all resulting in their well-received debut in 2019. Early tracks such as Everyone Is Hungover So I Walked The Mountain Alone were quickly picked up by BBC Radio Wales and SWN Festival, culminating in their debut live show at the festival shortly afterwards.

We asked Dan from the band to take us through the album, track by track.

‘Opaque Crater‘ was one of the first songs we started writing for Divine Invasions and the title came to Dan while he was travelling through the Scottish Highlands. We were in a hugely positive state of mind at the time as we’d just finished work on our debut album and wanted to keep the creative momentum going. We really feel this positivity comes across in the song.”

‘Opaque Crater‘ is one of the songs on the album that was pretty much fully written and recorded pre-lockdown, so the writing process for this one was quite different from the majority of the album. When writing started and we’d work in the studio together we’d come in with small ideas, never anything fully formed and just see where they took us on the day. That’s always been what makes Ritual Cloak so exciting for us, there are no expectations and that attitude of “there are no rules” really allows for our creativity to flourish.

Inspired by a short story written by a young Richey Edwards of the Manic Street Preachers (Dan is a Manics obsessive) in which he and a group of friends catch two of his teachers having sex in the woods. In the story the school friends try to blackmail the teachers, who take Richey to court, resulting in him being imprisoned for two years. On release from prison he walks over the severn bridge (self-fulfilling prophecy?!) to start a new life in Bristol.

This is Sanders at his best. The song began as an experiment, nothing more than a simple chord progression on the piano. This is one of the tracks on Divine Invasions that pushed us to new sonic territory where we really experimented with how instruments can be manipulated.

Another song inspired by the words of Richey Edwards and his opinion about ‘the melancholia of being Welsh, a defeated people surrounded by the ruins of heavy industry’. One of the first songs from the album to be recorded before the lockdown. Embracing a somewhat John Carpenter-esque soundscape, the song intentionally breathes with every kick drum.

One of our favourite tracks to come out of the second album, ‘High Teens Low Twenties‘ came about as when Dan discovered a forgotten loop of a simple arpeggio on his loop pedal. While setting up for a studio session Dan clicked the looper on and this sound just burst out! We both looked at each other and got to work immediately, and the song was pretty much finished by the end of that day.

The title refers to the impact of the climate crisis on young people’s mental health.

‘VALIS‘ is inspired by the Philip K Dick book of the same name, which portrays Dick’s obsession with his own religious experiences influenced by hallucinations, schizophrenia and drug addiction. The song opens with a sample of Dick’s famous speech from 1977 in Metz, France entitled ‘If you find this world bad, you should see some of the others’.

Dick’s writing has been hugely influential on Ritual Cloak. The words came easily for this song but it was difficult to settle on the music for a long while. Dan had been playing about with dreamy guitar chords and could hear a percussive bass riff repeating over and over. As the loops were built up, Dan began chanting the lyrics over the music. At the time, Dan was listening to a lot of Alice Coltrane and her use of chants accompanied by sonic synth sounds had clearly resonated.

This song eventually became the basis for SnowSkull to create his unique artwork for the album cover.

The song is inspired by the film of the same name – an environmental-themed post-apocalyptic sci-fi movie. Plant life on earth is extinct. A space crew preserve plant specimens in geo-domes with the aim of reforesting the earth.

‘Silent Running‘ is a good example of how lock-down was turned to our advantage. The theme of time runs throughout the song, with the majority of the rhythms provided by mangled samples of ticking clocks found around Sanders’ home. It was the beginning of the ‘stay at home’ message with nothing much but time on our hands, patiently waiting for what would happen to the world.

Running with a Mullet

Another track that has pushed us into new directions sonically, and probably the darkest song on the album, ‘Running with a Mullet‘ is a brooding soundtrack to the now familiar dark and empty city streets of lockdown Britain.

Written from the perspective of a close friend of the band before they passed away, and drawing on real-life conversations, the track marks the first introduction of lyrics and vocals (Daniel Barnett) into their sonic arsenal. Woven seamlessly into their traditionally synth-based approach, these new melodic textures work symbiotically with the track’s inherent, bittersweet gravity.

Amidst the darker weight of the subject matter and lyrics, ‘White Noise‘ also evokes an ever-burgeoning cocoon of light, offering some calm amidst the chaos. Initially built on the backdrop of arpeggiated synth strings and heart-wrenching vocal melodies, the track swells and evolves unexpectedly over its four minutes. This culminates in an almost triumphant progression of minimalist techno beats that boldly carves out the path forwards, only reaching its full power when each element is conjoined to the next.

The track was completed just a couple of days before the untimely death of their friend, Chris, who was its inspiration. Given he was such a big supporter of the band, it’s a massive shame he was never able to hear it. Naturally, it is dedicated to him.

‘Manylion’ means details in Welsh. A slow burner that starts more in the traditional post-rock tradition and ends the album on a triumphantly heavy note.

Work on Divine Invasions began as soon as the first album had been finished back in September 2019. The first album saw sparing use of guitar, instead mainly writing around piano. When it came to writing the second we didn’t want to fall into the same routine, choosing to embrace exploring new sounds, experiment with new effects, making guitars sound like synths and using vocals for the first time. The album began taking shape at our studio in Cardiff, but lock-down forced us to work separately, and in a very different manner than before. Whereas our first album was influenced by escaping the city, Divine Invasions was us confronting being confined to an urban world and processing masses of information each day. Lockdown resulted in a collection of songs that would otherwise have not come together had we continued to work in their traditional ways.