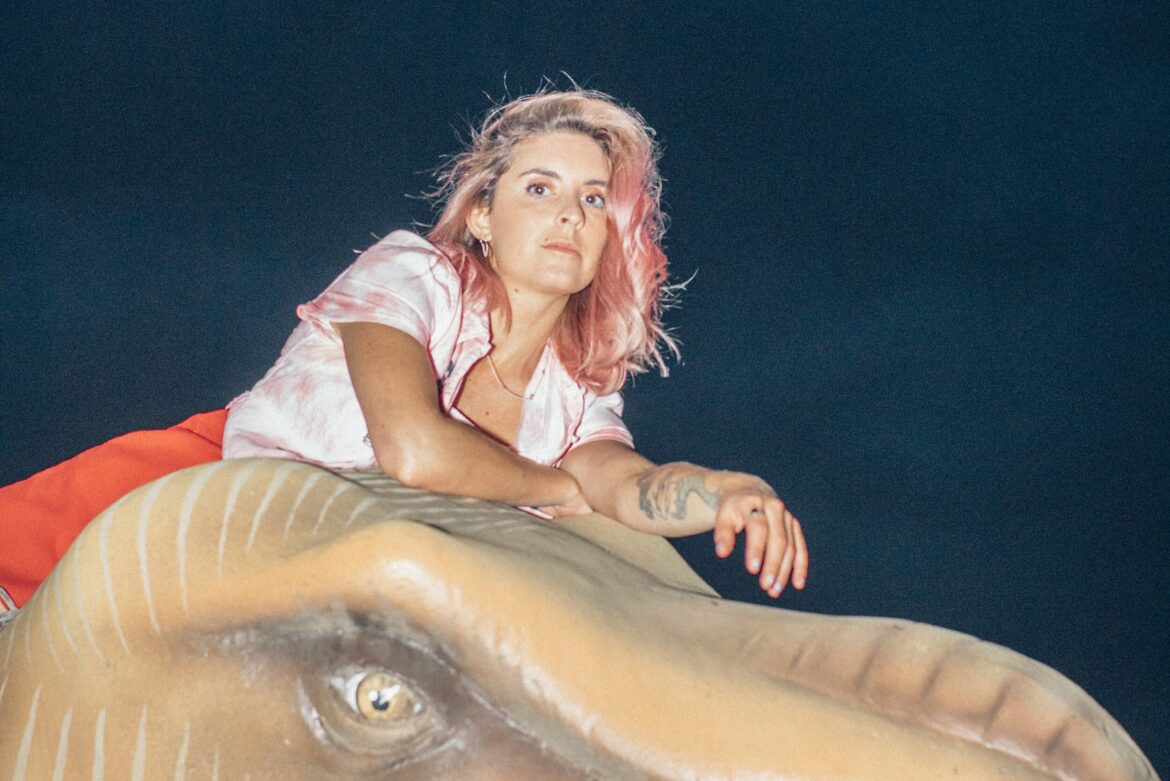 Australian indie-pop artist Merpire uses music as a method of dealing with anxiety, getting those negative thoughts out of her head and onto the page.  Rhiannon Atkinson-Howatt aka Merpire, uses observational lyricism with striking effect.   Her debut album Simulation Ride is out on 23 July 2021 via Warner’s ADA.  This is uplifting music, full of positivity and quirkiness, which is surely something we could all do with right now.

I had a chat with Merpire, as I was interested to know how creating her music had helped her, and how lockdown had impacted this process.


Good to meet you Merpire and congratulations on the new single ‘Village‘ from your forthcoming debut album Simulation Ride.

Can you tell us a little about your musical background, and where you are based?
I’m based in Melbourne, Australia amongst the best music community I could hope for.  I grew up in Sydney playing in a few cover bands from the age of 17.  I wasn’t a shy teenager but very anxious.  It took me a few years to actually move at all on stage.  Cover bands were such a great way to teach me stage presence, vocal range and to finally find my own voice!  Flash forward 10 years and I’m thinking seriously about making my own music my career.  After being a vocal chameleon for years growing up, writing my own music as me was definitely difficult for the first few years but I think it was a necessary process of trial and error to get to this point now of being so sure about all aspects of my music – lyrically, musically, visually, production.  It’s a great feeling.

I released my first EP in 2018, just after I moved to Melbourne and put my dream band together.  I’m still with them today and consider myself very fortunate to get to play my music with them.  Since moving to Melbourne I’ve played a number of Australian festivals and supported some pretty incredible artists – Julia Jacklin, The Last Dinosaurs, Gengahr for instance.  Again, I feel very fortunate I get to do this!


Did you write this album during the pandemic?  And how difficult was it to record during lockdown?
This album was actually done before the pandemic even hit!  I was going to release it last year after embarking on a few tours I had booked (and then cancelled) so it’s been a long time coming!  I did actually start another band with my partner, producer and bandmate, James Seymour during lockdown.  We were lucky enough to still have access to his studio so we came up with a concept album called Wilson’s Prom.  The whole EP is based around one night at a school prom in the 1950’s.  Each song is a different character’s perspective of each other and how they’re feeling at the prom.  It was so much fun and a great way to keep making music, getting to the core of why we’re even doing this, when we had the energy.  We explored sounds and effects we might not have for Merpire.  With no rules, it was freeing and has actually led me to the realisation that there really aren’t any rules for Merpire.  It’s easy to take it too seriously.

There were definitely days where I would just lay in bed and cry, grieving the music industry, panicking about what I even wanted out of life. I’m better for it though as I know it’s just a part of learning and growing as a human.

You have talked about anxiety and a lack of self-confidence, and the cycle of self-doubt. Did the process of writing this album help you deal with those issues?
Definitely!  It might sound weird, but sometimes I go back to these songs to soothe that part of myself.  It’s the only way I can take my own advice. The music video I made with my videographer Nick Mckk for ‘Heavy Feeling‘ was quite a turning point in the way I viewed my internal fears and anxieties.  I created these 3 ‘feeling monsters’, built the costumes and everything, who spent most of the music video bullying me, pushing me around.  By the end of the clip we all get along fine.  They represented anxiety, fear and sadness in my mind.  I had my friends put on the costumes and seeing my very real and scary feelings on the outside of my brain and turned into my friends really helped to take the fear out of those feelings. It was really quite a bizarre and eye-opening time.  After all, they’re just feelings.  They don’t stay the same forever.  I recommend this process to anyone.

And what positive message would you hope listeners will take from your songs?
That they’re not alone in what they’re feeling from day to day, minute to minute.  I really hope my songs can take listeners away to daydream and make memories with them.  They’re the best kind of songs to me.  To know that my song could play this role would be a pretty surreal feeling.

If I looked in your fridge right now what would I find?
You wouldn’t find much from me, that’s for sure.  I love to eat food but it’s rare that I love to make it.  I live with 4 male friends who all love to cook and they’re really good at it!  I’m soooo lucky that they cook dinner for me nearly every night!  I make them all dinner when it’s my turn but I’m usually getting help from one of them.

And finally what are your plans for the rest of the year? Have you missed playing live and is that on the horizon for you?
I’m going to release ‘Simulation Ride‘ into the world, finally!!!  I have indeed missed playing live. A plan for an album tour is underway.  There’ll be an extra special show in Melbourne with a light show, backdrops, dancers and things!

Thank you for having me!


Single ‘Village‘ is available now and album Simulation Ride will be released on 23 July via Warner’s ADA.
For more information on Merpire please do check out bandcamp and facebook.