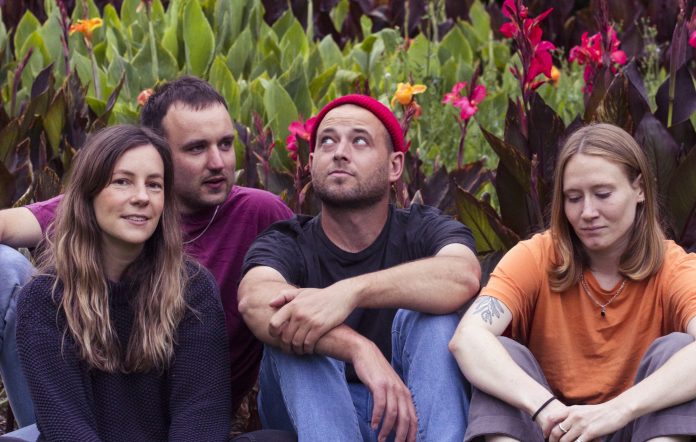 Their sound evokes the guitar-strum-and-harmonies approach of nineties college rock, with an emphasis on melody and lyrical content that doesn’t always match the upbeat nature of the songs. Their brilliant recently released album Golden Doubt (the first to come out in the US) concerns the aftermath of grief, and how to recover; two band members lost their siblings, and the record explores the road to acceptance and living on.

With reference points like R.E.M, The Go-Betweens and Alvvays theirs is a literate, bittersweet, shimmering harmony infused sound that is both uplifting but laden with tales of heartbreak and loss. The album deals with singer Sam Nicholson’s loss of his brother in a freediving accident, and “trying to not think about that, and often coming back to ghosts, benders, water, and pissing in the snow.” He is complemented by a solid rhythm section and glistening guitars and soaring harmonising of Holly Thomas and Bella Quinlan.

To celebrate the release Quivers have selected six of their favourite Australian groups for us. Three bands from now, three from before.

Michael Beach is my first pick. His latest record, Dream Violence, combines loud wayward apocalyptic melodic post-punk with devastating piano songs. Michael Beach has been in Melbourne for maybe the last 10 years since running away from San Francisco. His music to me is the sound of running away. It’s got the tightest looseness and the best guitars in that wild Neil Young/ Television kind of way.

Cool Sounds are a whole different ticket. They build off-kilter kind-of-yacht pop around the songwriting of Dainis Lacey. They pack songs with more melodies than anyone else. It’s unfair. All the band members have a hundred other bands also, so to me it is a supergroup. Their latest album is amazing, but I want to link to ‘More To Enjoy’ as its title track is my all-time favourite.

Emma & Lachlan both have deep catalogues of beaut songwriting now as solo artists and in the many bands they have been in (Snowy Band, The Ocean Party, Pop Filter). It is this combination of the two of them though that hits me in the gut. It’s tough pop in a way that commands your attention. Their dual vocals in ‘I’ll Be The Rock’ and the winding guitar melody are peak Melbourne pop to me. There’s no holding back.

The Moles, and the album Untune the Sky and the song ‘Bury Me Happy’ is a whole world of early 90s chamber pop made with minimal instrumentation. That song, ‘Bury Me Happy’, is all I need to get them on this list. It’s that classic small song with big ambitions or maybe it’s a big song with small ambitions. I don’t understand how it wasn’t a number 1 hit.

The Triffids were the first classic Australian band I got into. The more rambling acoustic album, In The Pines, was my entry-point. It was always in my car and probably still is there sitting under a rusting seat. I know people described The Go-Betweens as having ‘that striped sunlight sound’ but it is The Triffids that sound like sweat and steam. It sounds like a fog lifting. Born Sandy Devotional and then Calenture floor me. It’s songwriting with a lot of dirt under the fingernails.

If I’m being honest, classic rock cuts just as deep. Maybe deeper. The Divinyls, and Chrissie Amphlett, are the best. I imagine that live they would have slayed. ‘Pleasure and Pain’ also encapsulates for me a time in Australian pop that will forever be our jukebox music – Divinyls, Australian Crawl, Cold Chisel, The Hoodoo Gurus. Bands that just toured and toured and didn’t have to slow down to write social media posts. “It’s a fine, fine line between pleasure and pain, you’ve done it once, you can do it again.” There is a directness to the best songs, and this has that wrapped up in a swagger. Tough vulnerability. Not many other songs can hold a candle to it.