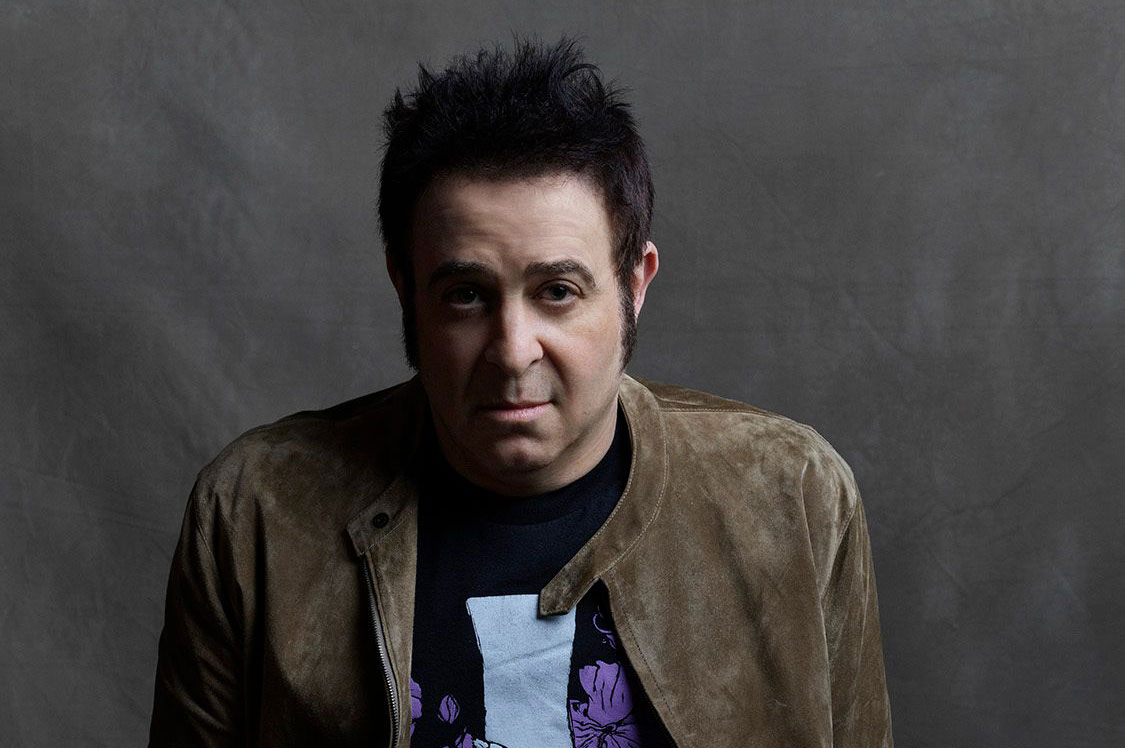 It’s mid-afternoon and for a man stuck on Zoom all day doing interview after interview, Adam Duritz is remarkably chatty and exhibiting good humour. The sofa he’s chained to, metaphorically of course, is on a friend’s farm in South West England. The farm is the very place he penned Counting Crows’ new record ‘Butter Miracle Suite One’, the appeal of the nature and solitude stimulated him to pick up his pen and start writing, bringing a lengthy fallow period to an end. Last album ‘Somewhere Under Wonderland’ is now seven years old. As we talk, there’s a  John Piper lithographic print on the wall above his head, an artist well known for focusing on British landscapes. That feels appropriate, as does Duritz wearing his familiar uniform of a band t-shirt, sharing his Sunflower Bean fandom across his chest. On the flipside, it’s not par the course for the main man from a quintessential American rock n roll band to be happily existing on our little island, enjoying a tepid summer in the English countryside with a Rottweiler called Copper.

‘Copper and I are very good friends,’ he says affectionately, scratching the dog’s ears. At this point of the day Copper’s after a treat or a walk, possibly both.
As a self-described ‘city kid’, the farm is one of his favourite places in the world he tells me, a longtime place of solace. Duritz doesn’t complain about his lot in life, but matter-of-factly lays out that for 30 years as a touring musician – a cycle of writing, recording, touring – meant the concept of a holiday was alien to him until he stayed on the farm for the first time five years ago.

‘So when I came here I kept coming back. I was here on my own for a bunch, just me and the dogs. I love writing I love gigging but they all lead me to recording. When I start writing I get excited about it and then I want to record and make a record and don’t seem to have many breaks.’

The four song suite is perfectly laid out, each song connected like the chapters of a book. Maybe that’s why the record came together so quickly, opener ‘Tall Grass‘ written in just two days. There’s a sense of familiarity on the record but the shooting of a rabbit described in the opening lines of ‘Tall Grass’ could happen at this very farm one imagines, stark imagery with no romanticism. ‘The rabbit won’t stop shaking but the life is gone, the blood is on the clover and oh god its eyes are open wide staring up at me’, it goes.
‘‘Tall Grass’ is very much about the profound experience of dealing with life and death of an animal. It starts on a very micro level very specific of an animal dying and blooms into a bigger concept about life and death,’ Adam explains.

‘When I first started one of the criticism I got about my songwriting from the record company was that is was too specific. And that I should stop using proper names and place names because they’d stop everyone else from identifying with it. I thought that was a dumb suggestion. Something you get a lot from record companies!’ He laughs. ‘I thought you ground things in specificity and if you open them up it shouldn’t lock everyone else out. You should be able to make it something people can identify with. We share a common humanity. You don’t have to share the same address. But you should write about your address.’

The day after writing ‘Tall Grass’ he played it to see if it needed extending or changing – it didn’t – then sang the line ‘Bobby was this kid from around the town’ which morphed into the next song on the release, ‘Elevator Boots’. That brought the idea of a suite into play instead of a conventional album.  ‘I loved the way it flowed out of the Tall Grass. And I got this idea what if I wrote a series of songs where the end of one was the beginning of the next. And I thought I wanna write, wanna record, wanna make a record.’

‘Elevator Boots‘ shows a reflection of his own lived experience as a touring musician. In some ways the character of Bobby is him, he’s willing to concede. Events, things, people in Bobby’s life are temporary as he goes from town to town, music a sole permanent anchor. ‘Everything else in his life floats in and floats out, comes in and fades away, they’re all very temporary and ephemeral. Except for music which is always there for him. Every night there’s always another gig, another show another chance to connect with something that’s the most important thing in the world to him.’

This highly unusual way of living when Adam was younger, birthed temporary intense connections with people, especially women. Adam describes it as a ‘weird byproduct’ of that life over those years.

‘Back then there were no cellphones, no email. You’re really out of touch with everyone at home. When we first started touring I think about how different it is now and it’s almost impossible to conceive, how did I get through all that time without talking to my girlfriend or talking to anybody. You were really isolated out there, just you and the band. So you did, you met people, you had these nights that were great, really wonderful connections you make.

Some people I’m still in touch with and still friends with now that we spent one night together 25 years ago. I’d meet people, someone was a model in Milan they’re there from Kansas or something Russia.  they’re just other musicians touring and you’ll meet a girl who’s the lead singer from a band see each other at a few gigs, see each other at festivals. You make these connections that were really important back then. I felt so disconnected from everybody else in my life. Not so much now, it’s very different now. You can be on Skype or Zoom with your girlfriend at home every night so your relationship doesn’t fall apart.’

There is a very poignant line in ‘Elevator Boots’. ‘I remember her I don’t remember me’ he sings. Adam has he says, a better memory of those people than he does of myself.

‘It was them you were looking to see a reflection of yourself. You feel so untethered sometimes. They provided gravity for a week or a night or however long you were hanging out together.’
The image of having trouble remembering himself he reflects, is a common theme for him in his writing.
‘Because it’s something I struggled with,’ he admits. 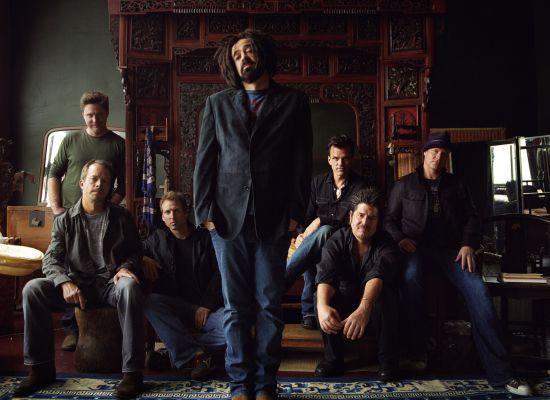 Adam’s famous dreadlocks – recently shaved off on a whim – were a major part of his identity for a long time. ‘With the dreadlocks I thought ah, that’s me. They were very important to me for a lot of years. The first time I ever felt like myself.’ But now they’re gone and sit in a carrier bag in a friend’s flat, while he experiences the British climate without his previous insulation.

Adam Duritz is a fun guy to chat to, I tell him I love the trumpet in ‘Angel on 14th Street‘ and he reveals how he originally ‘sang’ that part himself at first, much to the amusement of others. I have to ask if he had a good time experimenting with wordplay on the suite’s closer ‘Bobby and the Rat Kings’. ‘There’s a leather rat Fender strapped kid with a pick finger twitch’ is a tongue twister accident waiting to happen, surely.

‘So much fun,’ he nods enthusiastically. ‘I almost wish you could hear it how I hear it. I was really trying to play with the hip-hop way of wordplay on this record and Somewhere Under Wonderland. Songs like Earthquake Driver I really messed around with the speed and having more humour in the rhyme schemes.’

The ‘ob-la-di, libido’ in the end of ‘Earthquake Driver’ gave him permission to ‘fuck around’ with words. ‘Because I enjoy being a writer. There’s a lot of brilliant writing in hip-hop. They are willing to play around with it. I decided to loosen up and let myself partake of it. It’s a part of me.’

He started ‘Bobby and the Rat Kings’ as an attempt to write a Who song. ‘I always felt jealous of friends who can write things that got the crowds to air guitar,’ he jokes, but concedes it has more than a hint of Bruce Springsteen present.

‘But I was thinking of The Who,’ he insists. ‘I didn’t mean to write the “my generation” line (‘my generation doesn’t have a name’) but once I realized it was in there in this song, I started fucking around with my ggg generation, my degeneration.  I had version that were 2, 3,4 syllable gggg-s.   I decided to leave it with a simple one!’

I put to him that the concept of a suite feels nostalgic in many ways. He cites the second side of ‘Abbey Road‘, Marvin Gaye’s ‘What’s Going On’, De La Souls’ ‘Three Feet High and Rising‘. ‘Especially in hip hop there have been a lot of concept records that worked that way, but yeah it’s not like everyone’s doing them every day.’

Adam’s return to the farm is to work on a second suite.  ‘I haven’t done a lick of work yet,’ he grins mischievously and tells me about his emergence during the pandemic from ‘afternoon cook’ to instagram cookery sensation with recipes like buttermilk chicken which he insists I should have a go at. There’s gigs over in America this year too, so much to keep him occupied. And in the present, that magnificent good boy Copper and he are revelling in long gentle walks savouring the English countryside. Taking it all in. But something tells me, we won’t have to wait anywhere near to seven years for another record.

‘Butter Miracle Suite One’ is out now via BMG.