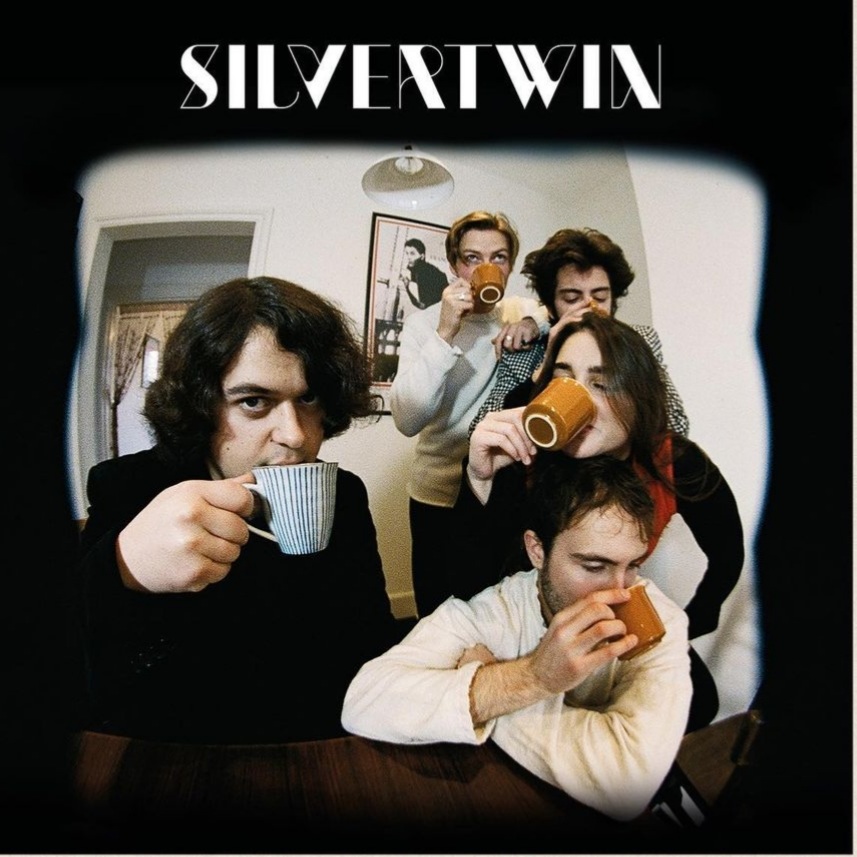 Shazoom! Unashamedly retro in their leanings. Silvertwin’s eponymous debut album is a rare beast. It is a reversion of sorts, conveying a sense of 70s homeliness in its overall ‘ambience’. A surprising potential nemesis to the works of Brian Eno.

Eno’s seminal offerings, both solo and with Robert Fripp, provided an inarguable escape from 70s amorphousness, transporting his chin-stroking, tank-topped listeners to a celestial higher plane, where they filled in the gaps stoned on abstract imagination. Silvertwin’s ten songs’ imagery evokes the complete opposite: the standard furnishings of many an adolescent abode – commonplace in Jonathan Coe’s novel The Rotters’ Club.

Frontman Isaac Shalam graces the record with his infectious phraseology and precise lyrics. The opener ‘Ploy’ transports the listener to a time nearly 50 years ago, which is very different from 2021, where ‘the home’ basks in a warm pre-Joy Division sensibility: a retreat from an overcast early-closing Wednesday afternoon. Musically envisioned is a stable tableau: crisps in bowls; lava lamps; prawn cocktails in the fridge; the glow of the hire-purchase telly. This is accompanied by an imagined scenario of Paul McCartney circa very early 1970, straddling his two separate careers in a truly golden fashion, and unstained by his bickering accountants’ demands.

‘Doubted’ harks back several months: a fantasy version of the time sans the brutal misinterpretation of The White Album and Abbey Road. Its timeless loving lyrics do not pander to modernity. As a garnish, it has a Queen-like acceleration coupled with Jethro Tull bouncy solemnity.

‘The Night Is Ours’ has a rollicking piano sound, and morphs into ‘Honey Pie’ pastiche overdrive. This is a track of delightful ambiguity with Sinatra-like Broadway-isms (“Come, let us say the word. Because the night is ours”) and post-psychedelic Pink Floyd-ian insinuations.

Cut from a similar cloth as the aforementioned track. ‘Saviour’ is more redolent of the 70s ‘progressing’, like the 60s ‘swinged’. Here the ‘voice’ of Silvertwin is felt amid Cheap Trick flamboyance. It has its ‘reference-point’ in its instructive Curtis Mayfield-like love song manner.

Silvertwin does contain relatively recent musical nuances. ‘I Don’t Want To Fight Anymore’ is easier on the ear with its Pulp-ish overtones, forefront vocals and simple thriving predictability. ‘You Only’ is its natural successor with multi-tracked vocals and intricate 50s in 70s feelgood lyrics, functioning like Proustian Music Hall nostalgia. It is beautifully wrapped in a lazy Sigur Rós-like cocoon. ‘Take Me On’ contains ballroom glitz by way of Primal Scream’s ‘Shine Like Stars’. Everything seems to embody in a righteous sense of community made all the more poignant during the recent lockdowns.

This short album was recorded to tape, rather than digitally, befitting Silvertwin’s inspirations. Appealing to those of a rockier disposition may be a hit or miss affair. But fans of prog and krautrock, electronica, lounge music will inevitably take note. The ornate production compensates for its brevity.