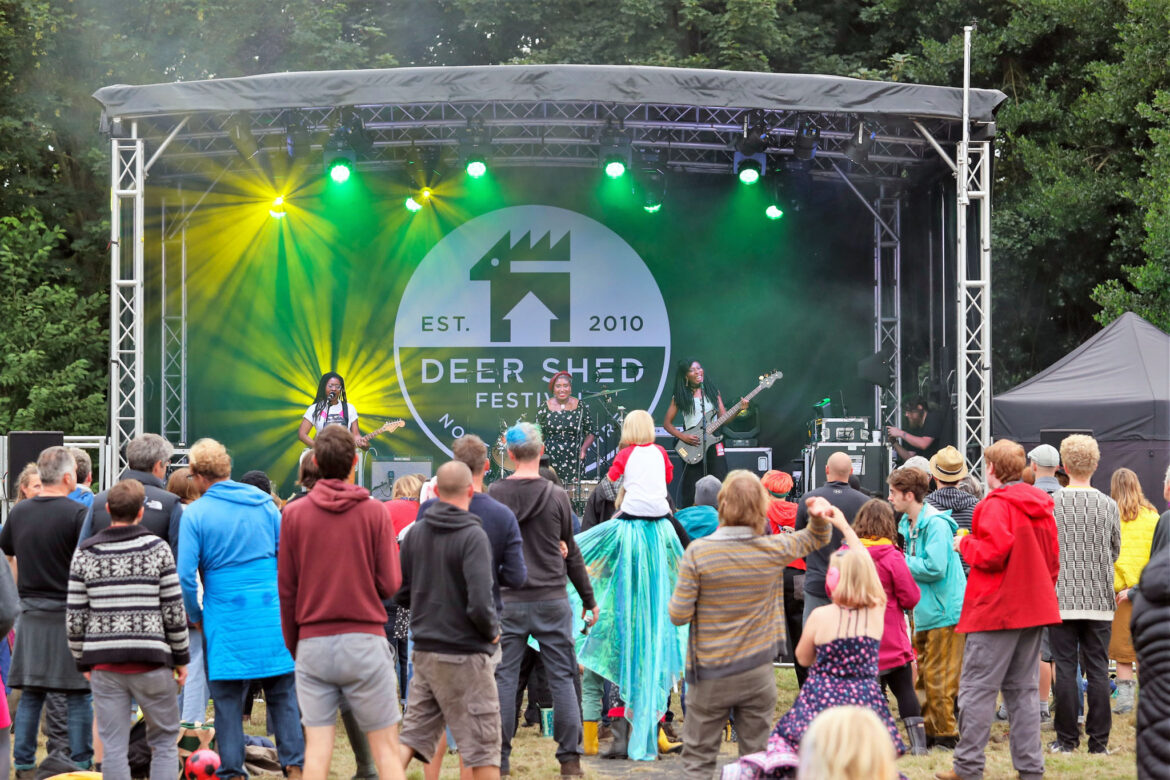 Deer Shed is back. Perhaps not in the way that we all might recall, but it is back. And for that we must be truly grateful. After the last eighteen months everyone has experienced it feels incredibly liberating to be once more in the splendid surroundings of Baldersby Park.

Due to the ravages of the coronavirus pandemic and alongside all such similar events, Deer Shed Festival’s eleventh annual edition sadly bit the dust last July. This hugely popular, family-friendly occasion was then rescheduled for the same time this year but once more the ongoing impact of the coronavirus disease and the fact that our government does not follow other European countries and offer to underwrite Covid cancellation insurance put paid to any chance of it taking place. Deer Shed Festival 12 will now happen over the corresponding weekend in 2022.

Last year the Deer Shed organisers put on Base Camp, a much smaller, socially distanced camping festival. This time round they expanded that concept by adding live entertainment and with the emphasis very much on public health and safety the strategy has been to plan, prepare and execute this event within Step 3 Covid-19 restrictions even though these were eased in England almost a fortnight ago. It all makes for very reassuring sense. This has meant a much-reduced capacity attendance (down from 14,000 to some 3,000 paying guests); each individual 12m x 12m camping pitch contains its own personal portaloo and washing facilities; proof of negative Lateral Flow Test results are required prior to admission; and given the scaling down in size of Deer Shed: Base Camp Plus, the programme of activities is not as expansive as it would otherwise ordinarily be. But as we establish over the next three days and nights it is still something pretty special. 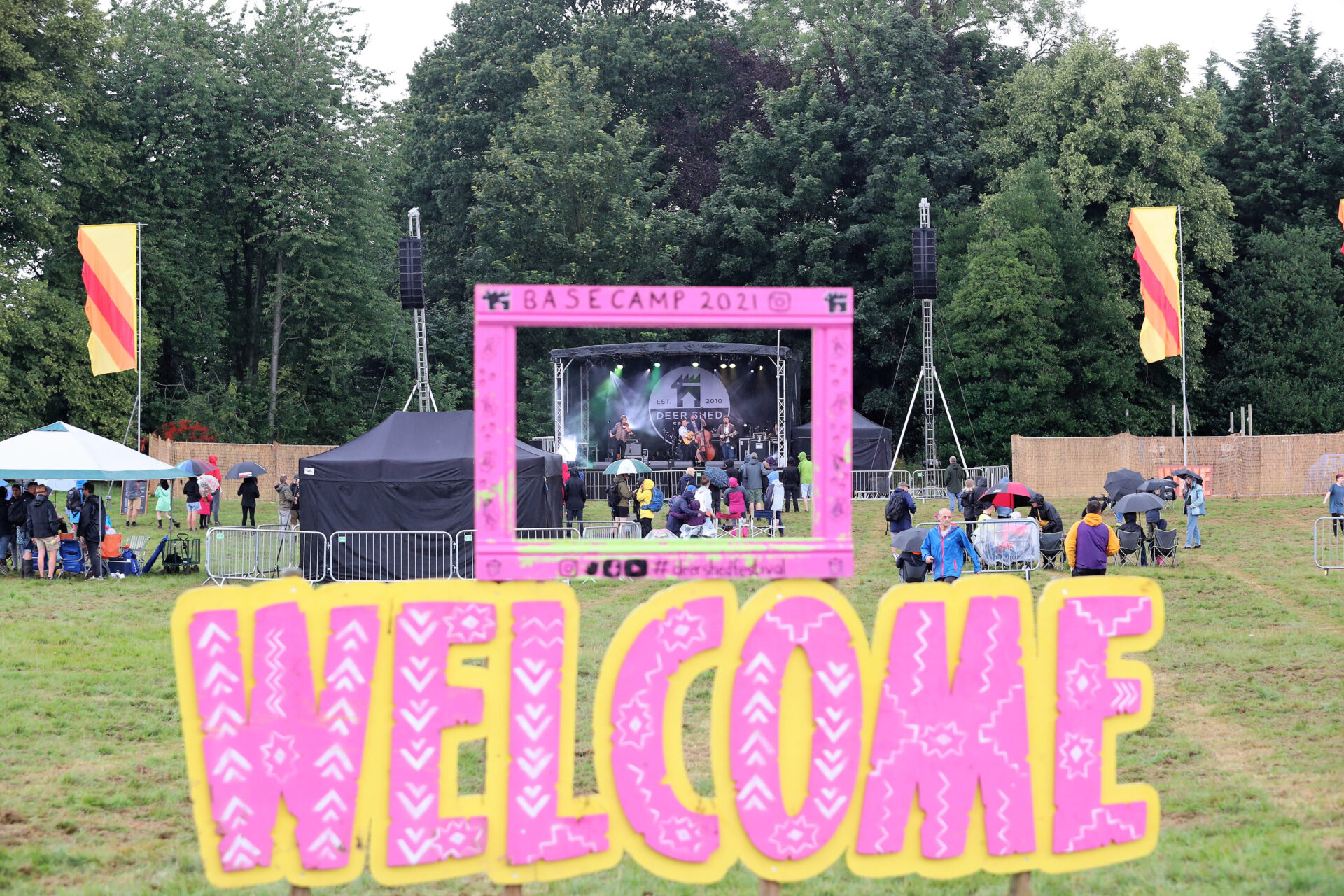 Whether it be by accident or design The Often Herd, the first act to appear on the main stage on Friday afternoon, open their set with ‘Cold Sheets of Rain’. It may not be that cold but it sure as hell is pouring down. In case this fact may somehow be lost on us, the North of England bluegrass band then follow this up by playing ‘Cool Summer Rain’. But despite the irony of their song choices, the four men delight with the dexterity of their playing. Their cover of The Byrds’ ‘Eight Miles High’ is stunning.

In spite of the most inclement of conditions, The Baghdaddies add to the vibrancy and diversity of the musical occasion with their spectacular blend of traditional folk music, Balkan melodies, ska and Latin grooves. Wonderful readings of ‘The Lambton Worm’ and ‘Keep Your Feet Still, Geordie Hinny’ reflect their Northumbrian roots. Their energy is boundless. Earlier they had joined in an exuberant walkabout around the festival site and then two hours later they do it all over again up at the Acorn Stage, albeit with a completely different set of songs.

Graham Fellows, in the fictional guise of John Shuttleworth, is the first of the weekend’s comedy acts. For anyone under the age of 50 most of his cultural reference points – from Aswad to 60’s British crooner Vince Hill and Betty Turpin, an erstwhile barmaid at the Rover’s Return, to 70’s BBC daytime TV programme Pebble Mill at One – will make no sense whatsoever. For the rest of us, he is just as hilarious as ever. 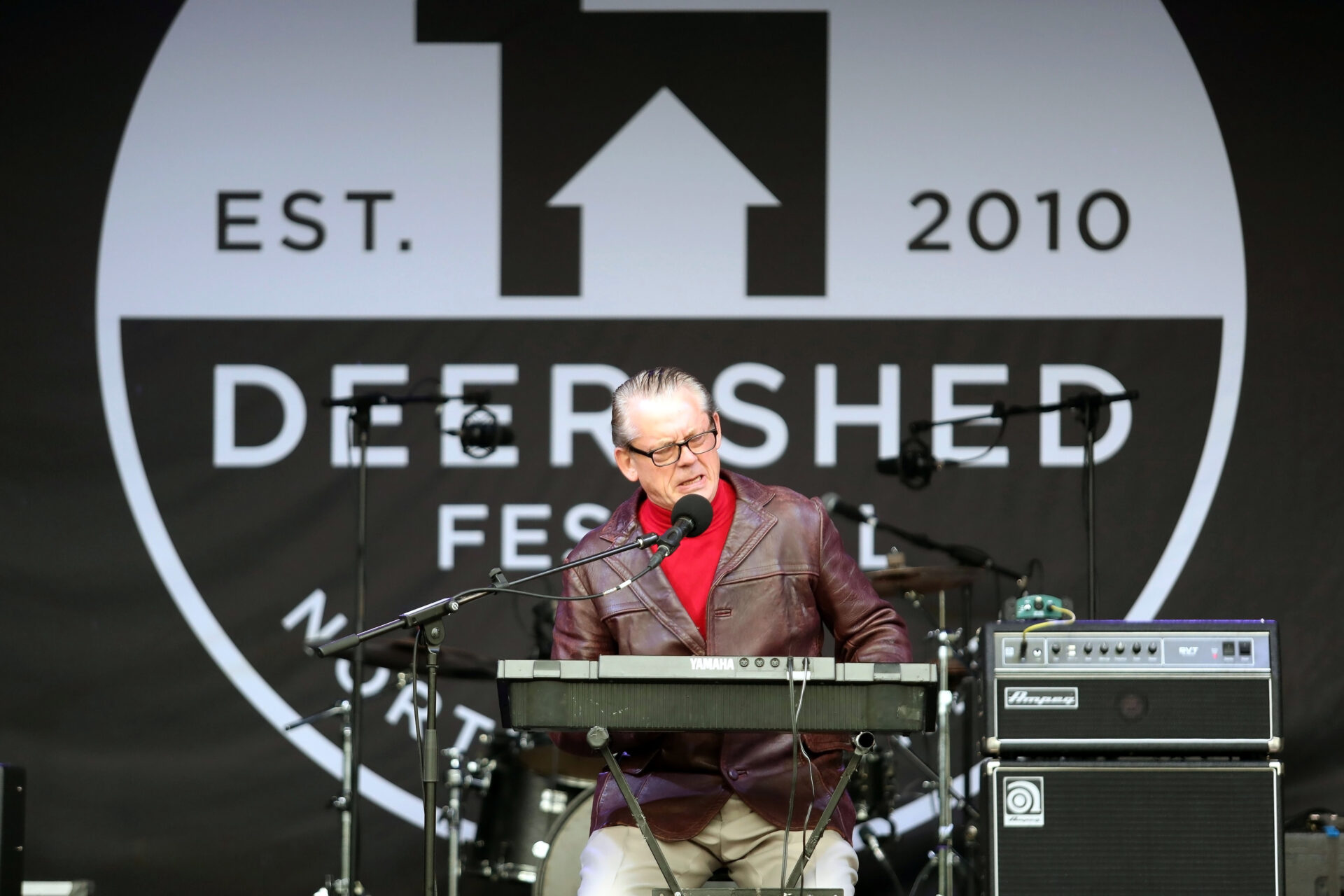 Leeds’ musician Rob Slater – a man more familiar locally as an engineer at his home city’s Greenmount Studios as well as having made past contributions to West Yorkshire acts such as Crake, The Spills and Post War Glamour Girls – takes this opportunity to unveil his new creative vehicle, Carpet. His lo-fi, lugubrious pop gems bring positively to mind an English Papa M or Damien Jurado.

The London-based trio Deep Tan enter into the spirit of the occasion, thanking their camping neighbours for their camaraderie and hanging out on site for the rest of the weekend. In their early evening slot in driving rain they also produce a dissonant post-punk sound which spills over with jagged rhythms and an undoubted primitive sophistication.

Hebden Bridge’s The Lounge Society pick up the post-punk baton and run with it, adding considerable sonic heft along the way. It is then left to Porridge Radio to bring the first day of Deer Shed to a rather wet but stirring close. The fact that half of the event’s audience are probably aged 10 years and under is not lost on the Brighton band’s frontwoman Dana Margolin who quickly engages the scores of youngsters – all of whom are up way beyond their bedtimes and have taken residence in front of the stage – by inviting them to shout out in unison their ages. It would seem they are all 10 years of age!

Whilst the perennial Deer Shed favourites such as workshops and activities, sports and well-being sessions can all still be found around the site – though admittedly reduced greatly in number – Saturday produces a perfect template for the next 48 hours, one whereby music and comedy easily and effortlessly dovetail together. The incredibly versatile comedian, author and sports pundit Mark Watson assumes the role of master of ceremonies, a kind of Colin Crompton for the modern age if you will. Instead of the outsize flat cap as once worn by Crompton on The Wheeltappers and Shunters Social Club, Watson here favours the safety helmet. It nods to him having earlier conducted his first set of the day from up a tree, but equally could be an indication of him having to weather the storm of a Q&A with a bunch of kids. 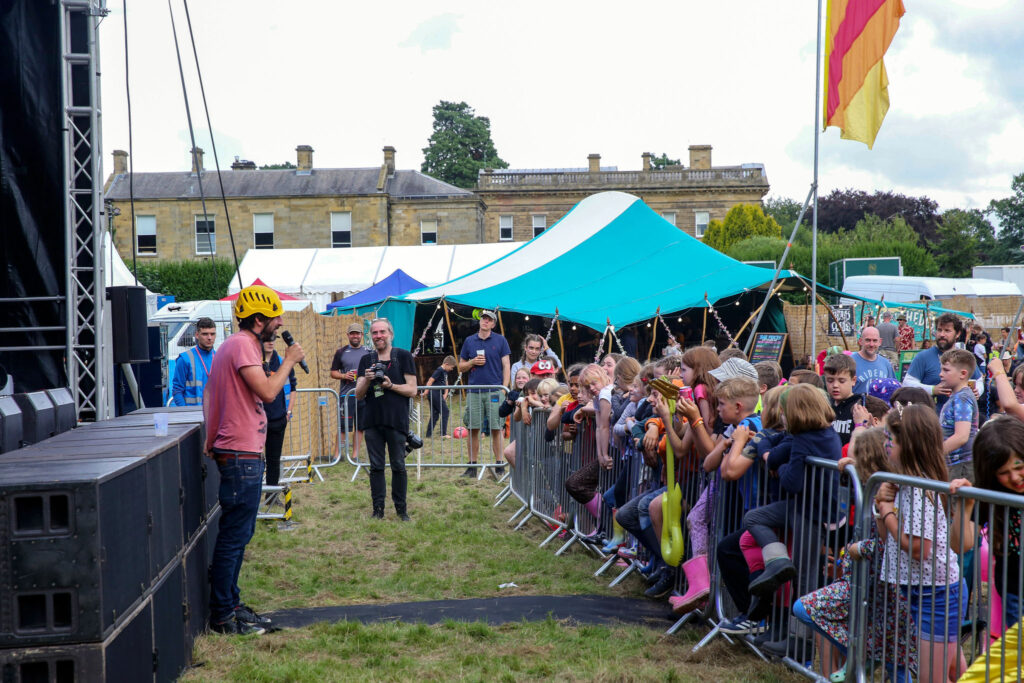 “Say something funny” bellows one youngster, setting the tone for the next quarter of an hour. “Do you have an X-Box?” “Do you like Harry Potter?” “Do you like burgers?” Do you know my Dad?” The questions come thick and fast. “I can see your pants” squeals a lad whose nose can barely touch the top of the crash barrier at the front of the stage. Watson bats back his responses with remarkable good humour and decidedly quick wit.

He goes on to introduce three comedy acts, one immediately after the other – Katie Pritchard, Rosie Jones and Flo and Joan – each for their 15 minutes of Deer Shed fame, an objective they all successfully achieve with great élan and tremendous mirth.

Big Joanie then get the evening’s musical ball rolling, both swiftly and most effectively. Inclusivity is key for the Black feminist punk trio and they mightily impress with their message of solidarity and well-rounded collective consciousness harnessed to the sheer exhilaration of the sound that they produce. Time spent in their musical company is time very well spent.

W. H. Lung were forced into a last-minute cancellation for Covid-related reasons but TV Priest stepped into the void at incredibly short notice. In what is quite unbelievably only their fourth gig proper, they play as if their very lives depend upon it. Lead singer Charlie Drinkwater sounds uncannily like a hybrid of Mark E. Smith and Iggy Pop, with his presence owing more to the latter than the former as he stalks the stage with coiled intent.

Up on the Acorn Stage – a gentle walk up the hill from the main stage – Serious Sam Barrett good naturedly advises us that anyone “who doesn’t like someone harping on about Yorkshire and trade unions is probably in the wrong tent.” He remains true to his word with a strong set of traditional and self-penned folk songs. 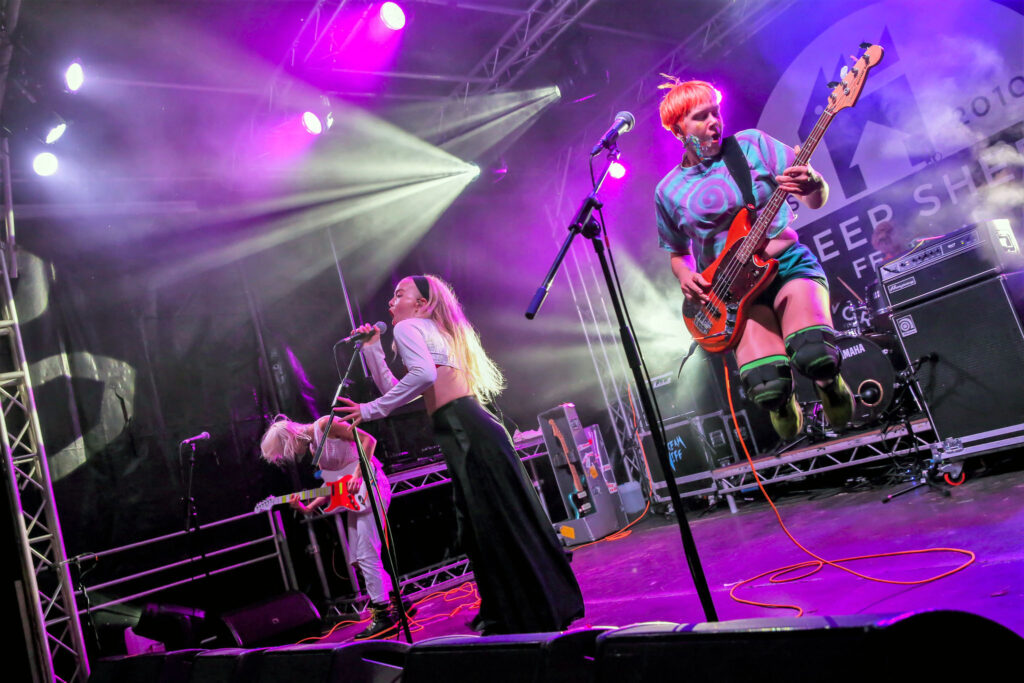 Dream Wife were last at Deer Shed three years ago, performing late afternoon on one of the smaller stages. That they are now headlining Saturday night shows just how far their star has risen in the interim. “Rock’n’roll is an extreme spirit” proclaims the trio’s Icelandic singer Rakel Mjöll. That said, and mindful of her audience tonight, she very considerately sanitises the words to a riotous ‘F.U.U.’ before somewhat incongruously tossing a bunch of tennis balls into the crowd. It’s all good clean fun.

With the rains of the first day having long since disappeared, the Sabbath starts up at the Acorn Stage with The Guardian music journalist Dave Simpson convening a panel of investigative journalist Robyn Vinter, BBC Radio presenter Rima Ahmed and comedian Matt Hoss for Sunday Morning Papers. Amongst many topics they cover on what is, after all, Yorkshire day, it seems even more apposite that they enter into an informative and insightful discussion about regional and national identities.

With the sun by now high in the sky the centrepoint of the afternoon is a wonderfully uplifting performance by the New York Brass Band. It captures the mood of the occasion, musically reflecting the sheer joy of once more being able to commune with others in relative freedom. North Yorkshire’s only contemporary New Orleans inspired brass band run through a medley of top tunes from Whitney Houston to BB King and Chic to a wholly apt blast of Katrina and the Waves’ ‘Walking On Sunshine’, before leaving the stage and leading the crowd on an elongated conga. 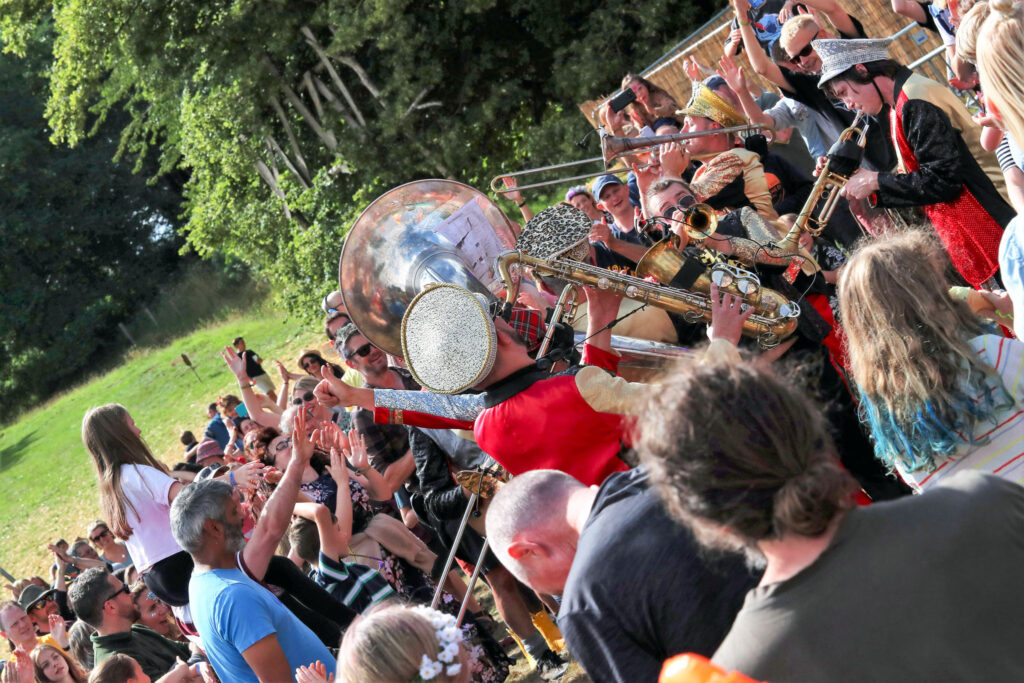 In between times comedy takes over, the highlight of which is a dizzying turn from Angelos Epithemiou who vacillates between the guise of a psychic medium communicating with Prince and a somewhat improbable interpretation of UB 40’s ‘Food for Thought’ before signing off to Mud’s ‘The Cat Crept In’ whilst stripped down to his long johns.

Katy J Pearson never fails to impress. Here she builds upon the success of her recent socially distanced, sold out shows as if liberated by the sheer joy of once being able to play in comparatively unfettered surroundings. Recent single ‘Miracle’ embodies this sense of freedom.

The London-based singer-songwriter Eve Owen provides one of the undoubted highlights of the entire weekend. Having completed her set ahead of her allotted time, and encouraged by a suitably appreciative crowd at the Acorn Stage, she then plays ‘Blue Moon’ and ‘After The Love’ from her debut album Don’t Let The Think Dry. It is a remarkable performance. The purity of her voice manages to carefully hold the fine balance between romanticism and apprehension about which she sings. 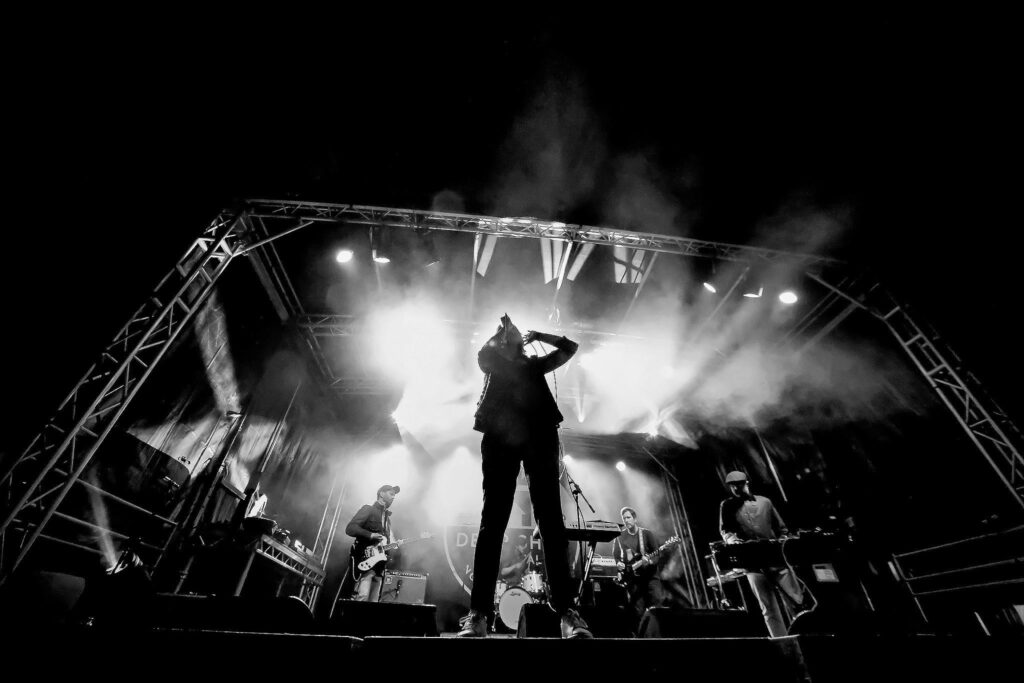 As if emboldened by the success of her 11th and most recent album, Flock – at one point she exclaims, with genuine surprise, that “it made the charts” – Jane Weaver further elevates her live performance onto some higher sonic plane. Here she fuses psychedelia and electronica with sheer cosmic energy. She ends with a resounding, extraordinarily muscular version of ‘The Architect’, bringing Deer Shed: Base Camp Plus to a triumphant close.

After a year and a half spent in various stages of lockdown it is difficult to accurately measure the psychological impact of not having been able to get together on occasions like this, getting together in a field somewhere in a warm, welcoming and relaxed environment, somewhere that is safe and secure, experiencing, first-hand, live entertainment and just enjoying the company of like-minded people. And for having just had the opportunity to do so once again in Baldersby Park we owe a huge debt of gratitude to the Deer Shed organisers and the wonderful team of people who made this happen. Thank you.

More photos from Friday at Base Camp Plus are HERE