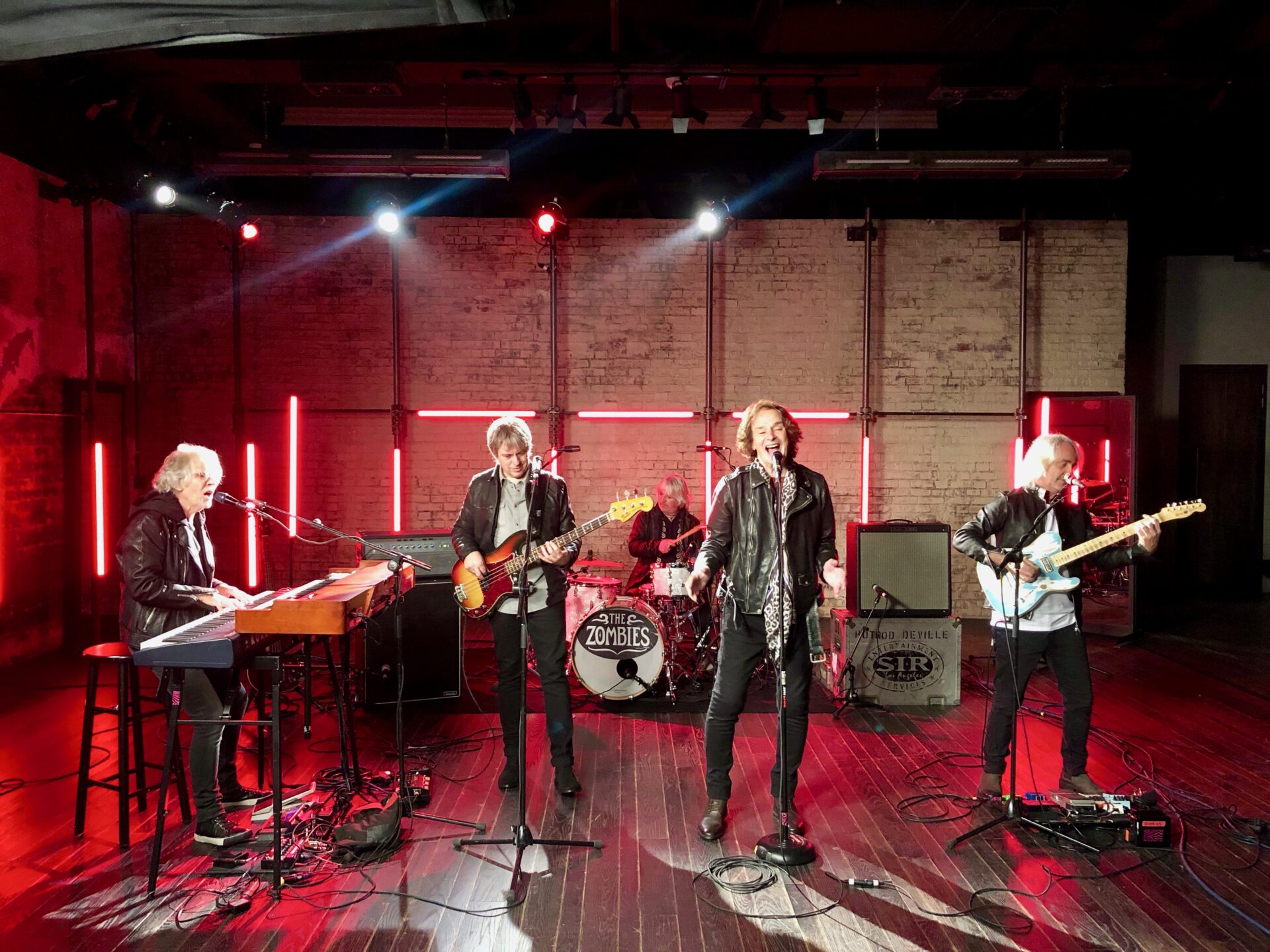 The  Zombies famously had hits ‘She’s Not There’ and ‘Tell Her No‘ in 1964, not long after forming. They split when 1968 masterpiece album ‘Odessey and Oracle’ failed to connect with public and critics alike, despite single ‘Time of the Season’s success on both sides of the Atlantic.  Singer Colin Blunstone and songwriter and keyboard player Rod Argent went on to enjoy solo successes whilst Odessy took on a mythical status amongst later generations, its baroque-chamber pop-psychedelic sensitivities capturing imaginations. Colin and Rod reunited as The Zombies some two decades ago, recording new works and tourng  the globe since, enjoying and ever-expanding audience.

This summer Zombies music featured in three films including Disney’s Cruella De Vil, and on 18 Sept the Zombies return to Abbey Road Studios where Odessey was recorded all those years ago to perform their only live show of 2020, the “World Tour in One Night” livestream. They play old favorites plus the debut of songs from their forthcoming new album.
We talk to singer Colin Blunstone about the Zombies’ impressive past and relevant present.

One thing is about The Zombies, it’s easy to assume you are quite posh. But that’s a common misconception.

I think maybe it’s because we’ve got Southern accents. Or maybe the publicity machine at the record company Decca Records was desperate for an angle. Maybe they pushed that we were kids just out of school, I mean, they had no idea what to say about us. And I think that feeling crept up.

There’s more quietly, subtly going on in those early singles that a superficial listen reveals.  Maybe that seeped through.

It’s interesting that you were very sporty at school. It’s really quite difficult to imagine you playing rugby. It doesn’t go with your demeanour or onstage presentation at all.

I was a school boy sprint champion, so I was very fast. I played county athletics and basketball. I played rugby as well because basically I was very fast and six foot 12 stone. I could play. And the first time (The Zombies) met, I was about 15. And I had a really badly broken nose and two black eyes. I was a real bruiser, I just copped it in a rugby match you know somebody’s head went straight into my face and broke my nose.

The Blunstone voice is remarkable, so special. When did you start singing is it something that you did from a boy?

I always sang. But I never thought of being a professional singer. I’ve never had any coaching. At my school, music was never thought to be particularly important, it wasn’t something that they concentrated on but I’d always sang and I loved pop music and rock music. Even when The Zombies came together I joined as the rhythm guitarist not a singer. And Rod was going to be the lead singer. In the first rehearsal we too a coffee break and Rod just went over and played a broken down old piano in the corner of the room. Even the he was a wonderful keyboard player even at 15. He wanted it to be a rock band and all guitars, he didn’t want the keyboards in the band. As I was putting my guitar away at the end of the very first rehearsal, I stayed and sang a Ricky Nelson song and he heard me. He heard me and said look, if you’ll be the lead singer I’ll play keyboards and that essentially is how the zombies came together. It was never intended. It just happened by chance,

Because you were so young when She’s Not There was a worldwide smash, it makes one wonder how you managed to stay so normal, if that’s the right word?

I think I should say first of all that you should always be very thankful for any success you get at any time in your life, but ideally I think it would have been better for success to come a little bit later for us. But our first record with a big hit record and we missed out on that part of honing our craft if you like, we went straight away into touring with Dionne Warwick, Isley brothers, and the Searchers. That was the first thing we did after the hit record. And I would like for us to have played in the London clubs that many bands played at the time. The Stones did it, the Yardbirds did it. Clubs like the Marquee, and we would have done that but decided to become professional band.

We were all living at home. We lived in small small towns, I lived in Hatfield in Hertfordshire. I didn’t move to London, I think, all these things help keep your feet on the ground. I had the same neighbours before I had a hit record, as I had after I had a record. They weren’t thinking about hit records they were just thinking about young boy who had grown up in Hatfield. It was very easy to keep my feet on the ground. Also we didn’t have the best of management. And so, we never really made any money and I think you can get a bit carried away if you have huge financial success at a young age, but we never had that. So we, we managed to keep fairly sensible about the whole thing. I’d like to think so anyway!

You’re known as the nice guys of that time.

I’m not sure that’s an advantage! II think most successful bands are sort of seen as a bit edgy, pirates and gypsy boys!

Listening to the single  Moving On from the latest Zombies record Still Got That Hunger, both capture a sense of continued artistic ambition. On Moving On is the line ‘I won’t cry for the past’. Appreciating that The Zombies’ success could have been sustained if things were handled differently but you’re ok about it and happy in the now.

It’s very important to us to write and record new material. Although we’re a band that was started in the 60s. We’re not reliant on our 60s repertoire. We’re still trying to write and record quality material, I mean, it’s for others to judge whether we succeed or not but that’s what we’re trying to do. And one of the great thrills about what we did is that usually our new songs get as strong a reaction as the old hits do, and it’s really uplifting for us. Very often in interviews people want to talk about the 60s and, and I try and do a trade off, you know, our show of course it was about the 60s and the British invasion and She’s Not There and Time Of the Season and so forth, but I just hope that I can interest them in what we’re doing at the moment.

There is like a bit of a thread between Odessey and Oracle on your latest album in particular, Odessey unbelievably was done on a budget and Still Got That Hunger crowdfunded. Two different dimensions of the DIY approach, if you like.

It is a little bit like that and of course we’ve got the predominant songwriter in  the Zombies in Rod Argent writing the majority of the songs, and we’ve got the lead singer signing them. Our relationship if you like, is also a thread from the 60s to now and Rod will often say that he learned to write songs for my voice. So, subconsciously, he’s always writing from my voice, and I learned to sing professionally, singing Rod’s songs. Our are careers are entwined. And there’s nothing we can do about it, you know? That’s the way it is!

In late 60s a lot of very wonderful and now cherished albums got lost. Did you feel that way about Odessey and why do you think it wasn’t successful at the time?

Honestly, I’m not sure I can explain why it wasn’t successful at the time, and yet now Rolling Stone’s named as one of the best 100 albums of all time. That’s not through promotion or marketing it’s just through word of mouth. People that discovered it, I mean one of the main reasons that the Zombies finished as the band was because obviously Odessey wasn’t a commercial or an artistic success or whatsoever. Reviewers didn’t like it, and the buying public didn’t like it. It wasn’t considered a success on any level, but over a period of years, it has done incredible things suddenly it becomes a very important work. This is a bit of a mystery to be honest but it’s a very exciting mystery. I don’t understand why it’s happening. But the people that name check it Paul Weller in particular, has called his favourite album of all time, people like Tom Petty and Dave Grohl very often name checked Odessey and Oracle as a very important album.

That’s because it is, Colin.

Thanks very much! (laughs) It’s very difficult to judge your own work to be honest. I thought at the time, it was the best we could do I really did. It’s only as people look back that they see it in a different light. It’s really interesting, you know, to have this success 50 and 60 years after the record was made, it’s very very strange, but we’d rather we get the acknowledgement now than not get it at all. So, I’m really grateful that people have, have eventually found its worth.

The Abbey Road live stream concert on Saturday will be followed by an online Q&A Session with Colin and Rod Argent, hosted from “across the pond” by legendary rock journalist David Fricke. The band will also field questions from a virtual audience of surprise celebrity guests.

The Zombies tour the UK in February & March 2022. Details here.