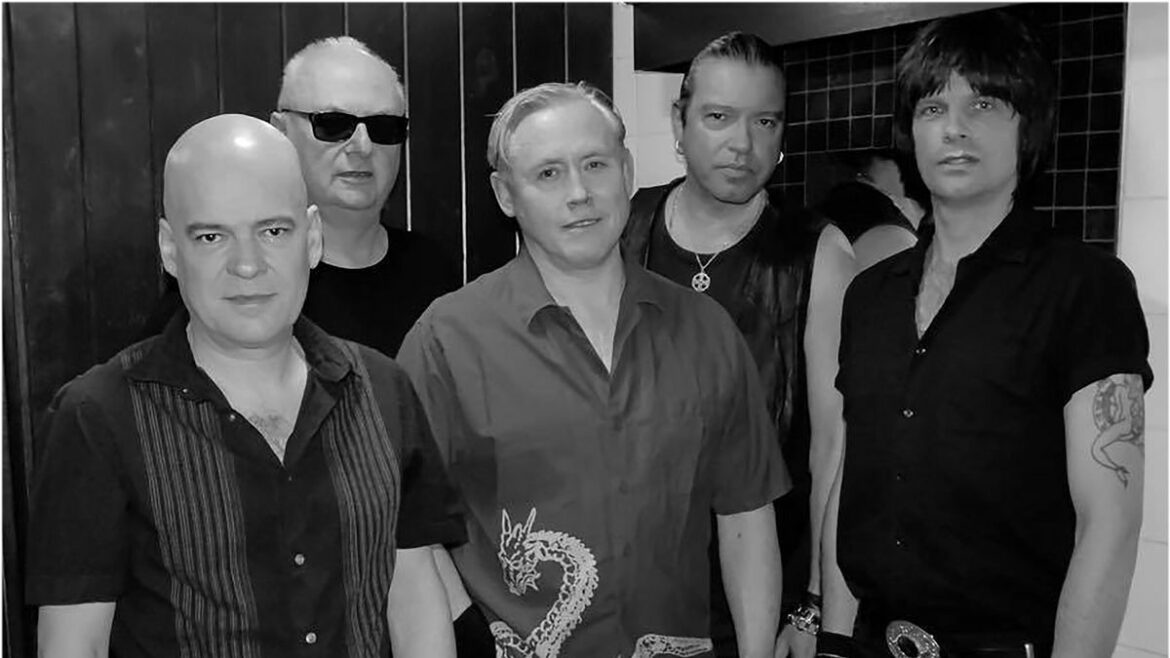 It’s a sign of the times that the tour to mark the 35th anniversary of landmark Spear Of Destiny album World Service is taking place 36 years after its release, but tonight in Birmingham, this is not something that anyone present appears to be worried about. Any excuse to celebrate the band’s 1985 classic is surely acceptable.

Bucking the trend for the ‘album played in full’ format, the band lead off with the album’s title track (which, as you will know, was Side One, Track Four) and then proceed to be creative with the album’s sequencing, including contemporaneous B-sides ‘Cole Younger’, ‘Last Card’ and ‘Walk In My Shadow’ alongside the ten tracks on the original record. In fact, they have actually recently re-recorded the album using a similar premise to celebrate its 35th birthday too.

Spear Of Destiny’s legendary (and I never use that term lightly) leader Kirk Brandon is in great form and seems to be extremely happy to be back in the live arena, always his natural habitat.  Happily, his vocals are remarkably unaffected by the passage of time, (though he will confess at the end of the show that he thought he had lost his voice earlier in the day), and the current Spear line-up, (now well-established, but not the band who made the original World Service), are completely in tune, both literally and figuratively, with the absolute emotional power of these extraordinary songs.

I watch the band play ‘Rocket Ship’ through misty eyes; it’s the album’s opener and a song that was never far away from my teenage record player. The song’s refrain ”We’re nothing special / Nothing at all / I want to love you / My whole life through” always struck an emotional chord and tonight, after the enforced lay-off of live music, it sounds just sublime. Almost-hits ‘All My Love (Ask Nothing)’ and ‘Come Back’ are celebratory and ‘Once In A Lifetime’ is one of many songs that benefits from the bass of ex-Sisters of Mercy and The Mission member Craig Adams.

These ‘playing the full album’ shows often cause artists to re-visit rarely or never-played songs, in World Service’s case, this is very much ‘Somewhere In The East’, which Brandon admits is “a song we lost somewhere along the way”.  Delicate closer, ‘Harlan County’ seems to be omitted, but actually begins the second part of the evening’s set with Brandon alone with his guitar, an interesting alternative to the piano and vocal arrangement of the original.

Fan favourite ‘Solution’ is absolutely incendiary, the evening’s only offering from debut Grapes Of Wrath (also performed in Brandon’s pre-Spear band Theatre Of Hate) while ‘African Proverb’, a track from the band’s most recent album, ‍2018’s Tontine, also makes the set list. A cover of Joy Division’s ‘Transmission’ is the evening’s biggest surprise, before the band close the show with two from 1984’s One-Eyed Jacks, the epic ‘Playground Of The Rich’ and traditional closer ‘Liberator’, the song that got me into the band in the first place, Brandon as ever singing as if his life depends on it, absolutely in his element.