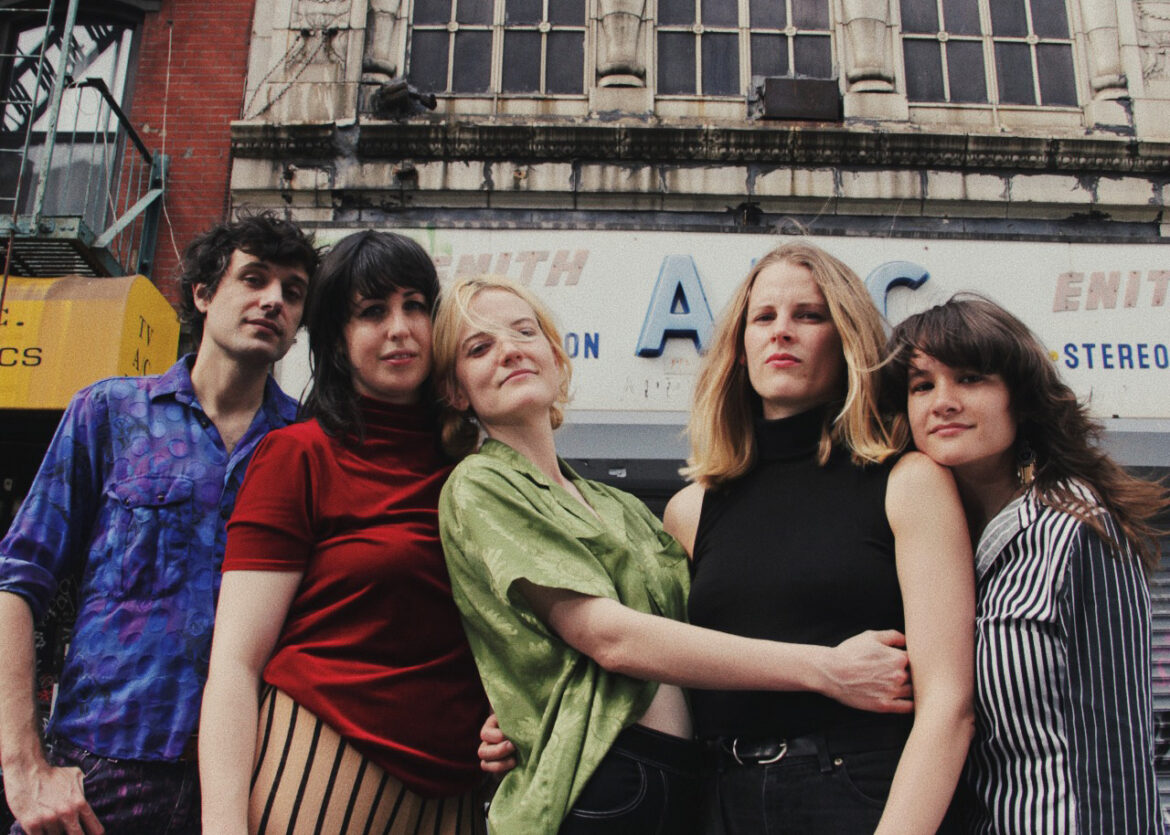 Gustaf were named in NME’s One to Watch 2021 list and now release their debut album Audio Drag for Ego Slobs out on 1 October on Royal Mountain Records.  The album is a combination of lessons learnt both on the stage and in the studio.

The album opens with ‘Mine‘ which was the first recorded material by New York-based Gustaf, released as a single last year, and is followed by ‘Book‘ also a single release.  Gustaf do not believe in long song titles, but there is no need as the tracks speak volumes.  Lyrically the 5-piece find inspiration from the full range of human traits and emotions, from angst and self-doubt to humourous and ridiculous observations.  All this is passionately delivered in an art punk wrapping of angular basslines, stuttering funky guitars and with their tongue firmly planted in cheek.

The title of the album perhaps gives us an insight into the world of Gustaf.  Lifted from the avant-garde multimedia artist Laurie Anderson, Audio Drag refers to Tarra Thiessen’s (vocals, percussion) deepened pitch shifting voice filter, while Ego Slob is a self-coined phrase to describe someone who does a sloppy job of translating the outside world within the context of themself.  Surely a universal trait of human beings, this perfectly describes the album’s controlled chaos.

‘Liquid Frown’ is a slightly gentler track but this being Gustaf it still has a bouncey energy.  Relationships feature prominently in Gustaf’s songs.  This track explores change and how perhaps a partner is critical with one’s growth.  We are all individuals and sometimes we grow apart and rather than be critical we could be supportive.  Meanwhile ‘Dog’ takes a different angle.  It shows the confidence in their quirkiness that, yes, that is “woofs” you can hear throughout the song, but it works!  The even pace is reminiscent of a walk with the dog, and the humour here is palpable.  “I forgot I loved you, then I saw your dog”, so the dog was the most important thing in the relationship by the end, which says it all and makes you smile at the same time.  “You should have loved me like that dog”.

The 10 track album finishes with ‘Happy‘.  The desire is expressed for happiness to a previous love.  “I wish you kindness, from the centre of my heart”, what a beautiful sentiment to end the album.

Gustaf have produced an album full of heart and spirit.  It is personal while at the same time relatable and funny.  The vocals are full of raw emotion and and the odd chat in the background adds to its sense of reality.  And all the while it is danceable and funky with a sense of fun that is never far away.  Gustaf will be touring across the United States in October in support of Idles, followed by support to Pillow Queens in the United Kingdom in November.  On the evidence of Audio Drag for Ego Slobs surely it won’t be long before we see Gustaf headlining their own gigs on both sides of the pond.

Audio Drag for Ego Slobs is out now on Royal Mountain Records.
For more information on Gustaf check out their bandcamp and facebook.