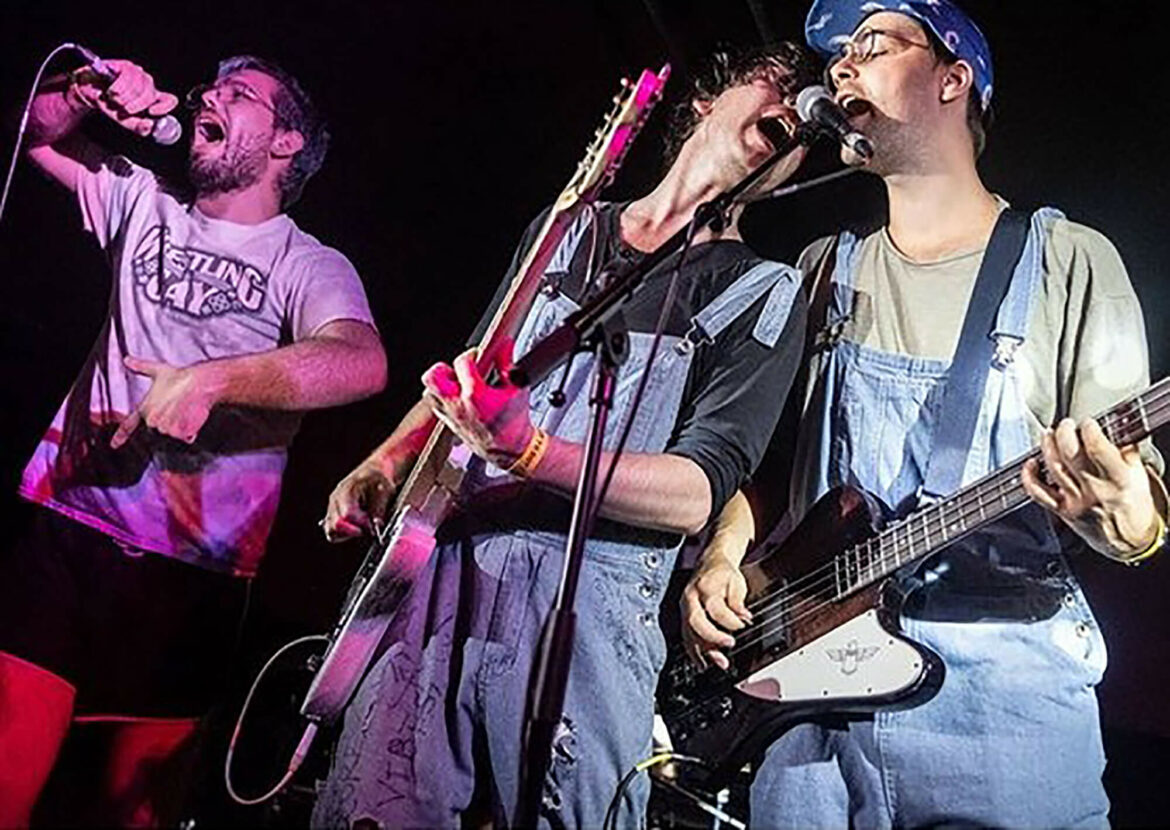 Dot to Dot festival takes place over two days in the cities of Bristol and Nottingham.  Musicians, predominantly from the UK indie scene, gather from afar (and many locally) to perform in numerous venues across each city. It is the ideal set up for anyone with ADHD who despairs at the idea of being stuck in one venue all day, especially if it’s an O2 Academy.  This format allows the festival to not only support local musicians but also local venues by bringing event revenue to their business. After two years of lockdowns, it is exactly what Nottingham needs.

The city pumps with more energy than an eager to please new teacher on their first day of the job.  Crowds of people wander the streets with their own agenda as the event collides with freshers’ week and a world market/food fair that’s taking place at the square.  My first festival-related stop is a paella stand. With potentially 8+ hours of being on my feet and racing to other venues between sets, girl gotta eat.

Having filled our stomachs (I’m with my BF), we headed over to the Angel (a former rock bar, that’s still a rock bar but also has some craft beer now) to see Nottingham-based post-punk band, Stuart Pearce.  That won’t be the last time I use the term post-punk by the way.  There’s a lot of post-punk these days, it’s really the de-rigueur genre of the moment. There’s also a helluva lot of Joy Division t-shirts around too which probably has something to do with it.  But Joy Division isn’t the biggest influence for Stuart Pearce (yes, the band is named after some footballer but I’m not going to talk about that because I don’t care or know anything about the game).

Stuart Pearce’s biggest influence is The Fall.  The mumbling, the self-deprecation, the shambolic but somehow melodic sound are what both bands share. They’re the first of the bands tonight that comprise of men wearing suits, which is apparently the default uniform starter pack for being in a post-punk band, however, despite it being a Sunday, this lot look like they might have, in fact, just knocked off work. 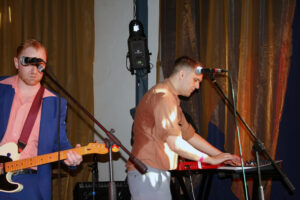 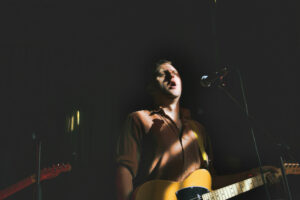 After we wait for a friend to finish their conversation with another group, we begin the walk through Hockley towards Talbot Street, the home of the largest venue at the festival; Rock City to see another local act, Do Nothing.  More suits await but this time they’re a bit tidier and more polished.  The band have really drawn quite an impressive crowd for a local act, they are clearly well-loved.  It’s a slick performance that carries the veneer of professionalism that may well see them through to bigger stages with bigger bands.  The vocalist lingers on each sentence and has a flair for the dramatic with an undertone that suggests he owns at least one Smiths album and probably a collection of Keats’ works.  But they are not an aloof band and throughout the set try to extend out towards the audience with the aim of closing the giant gap between stage and crowd. 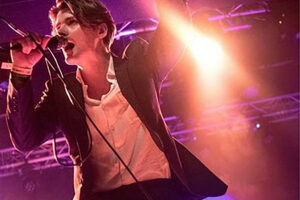 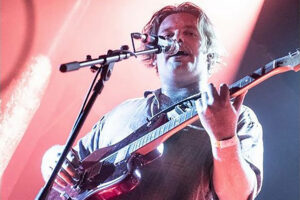 I chat to my friend James and he says he’s going next door to check out a band that’s been recommended to him. What are they called?  I ask, as my itinerary is free for an hour. ‘Joe and the Shitboys’ he replies, they’re kinda like a queer, punk band…” Sounds like my kinda thing so we head towards Black Cherry Lounge next door to Rock City and take our places at the front of the stage.  A bassist and guitarist wander out front wearing matching dungarees, a drummer follows in tow and then presumably there’s Joe, maybe he’s not called Joe, maybe it’s ironic but we’ll call him Joe for the sake of this article.  He’s wearing cut off denim shorts and a t-shirt that says ‘wrestling is gay’ and his lips are coated in glittery, red lipstick.  I’m excited, I know I’m going to like this band.

There is not a band that possesses more energy than Joe and the Shitboys, THAT I’m convinced of.  Joe never stops moving throughout the set.  He moves into the audience, hands the mic over to myself and others so that we can join in a chorus of “FUCK YOU” in one song. There’s a man in the crowd close to the front, who’s unassumingly amused but somehow stoically so throughout the performance who seems to takes the brunt of audience interaction, I’m not sure why it’s so funny but it is. He just looks so determined to try and hold it together.

Joe nearly does the horizontal splits at one point and announces that they’re going to do a cover of ‘Wonderwall’ which is a five second burst of noise.  He asks if people like Greta Gerwig; they do.  Every song is short and fast and filled with casual swearing.  I am reminded that my knees are not quite what they used to be when we’re instructed to get down in one song and then spring back up once it kicks in.  My springing days are over, I can feel the ache and the extra second it takes me to get from a squat to a standing position.  But I’m rejuvenated, I hadn’t expected to see a proper punk band that would make me feel stuff and things and I’m so grateful for this unexpected find based on the recommendation from a friend of a friend. 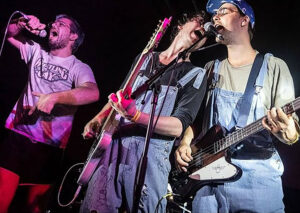 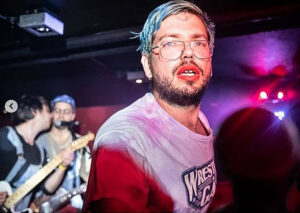 Half an hour later, my group and I split up because I’m heading over to NTSU, where I wait for London-based indie band Sorry to set up.  The other half are staying at Rock City to see Girl Band.  A friend assures me that I’m making a mistake, that they know my music taste better than I do. It’s possible, but I really like Sorry’s 925 album. I’ve actually listened to it all the way through a few times which is more than I do with a lot of records these days.  I get the impression that there are some sound problems, Lorenz asks for more vocals a few times, I’m not sure if it’s ever properly sorted.  Maybe she doesn’t want to cause too much of a fuss because that’s what it’s like when you’re the female front of a band and are having to ask the sound guy to enable you to be heard by your fans.

Perhaps that’s what’s put them on a bit of a downer – the band plough through their 30 minute set without any audience interaction, despite fans clamouring at the barriers singing along to every word.  They don’t really look at us, not even me and I’m in front of the barrier taking pictures.  It’s a vague and detached taking-it-all-in approach and sexless, completely sexless.  Now, I’m not suggesting that they should be dressed in thongs and stripper shoes, twerking and rolling around in dollar bills.  I don’t mean that kind of sex, I mean the show kind (and yes, I know Nicki Minaj combines both those things but that’s beside the point) where you recognise you’re a band playing in a fairly big venue to a reasonably sized crowd and you give them a bit of what they want, what they’ve come to see, because if you don’t then why invite them to experience your music in any other setting than on record?  There’s nothing wrong with being a studio band but it’s a waste of people’s time and money when you’re a touring studio band. 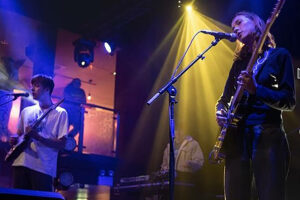 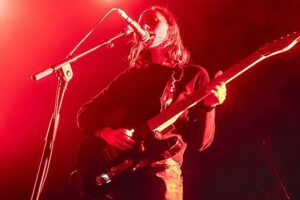 Apparently, Girl Band were incredible.  I head back to Rock City for Sports Team this time.  They’ve drawn a huge crowd.  The band come on stage to ‘Let Me Entertain You’ by Robbie Williams, it’s an apt choice for this energetic band.  Having met at Cambridge during their studies, Sports Team possess an air of wanting to live with the common people.  The group’s vocalist Alex Rice, constantly leans into the crowd, even jumping the barrier at one point.  Crowdsurfers are dragged over the barrier by Rock City security guards where they run back round into the thick of it like children who have five tokens for an inflatable slide at a fairground. I’m hustled out of the way whilst taking pictures to make space for the chaos.

A burly security guard asks me if I have a photo pass, I point to the sticker on my chest, “why do you think I’d be here with a DSLR camera if I didn’t?”  Rice is wearing black leather trousers and a dishevelled white shirt, with a loosened, oversized tie.  He has bedhead and every now and then looks around at the audience as if taking it all in, as though he has dreamt of this, of being a rock star, of being adored.  He tries to touch hands with the odd, escaped crowdsurfer who reaches out to him before being rushed away.  One woman manages to find her way onto the stage whilst security are busy elsewhere, she wanders off when bored.  The keyboard player inexplicably looks as though he’s walked out of the Hacienda in the late eighties and the guitarist sort of looks like the kid from The Wonder Years as a young adult. It’s a lot of fun and I can see why Sports Team are becoming renowned for their live shows. 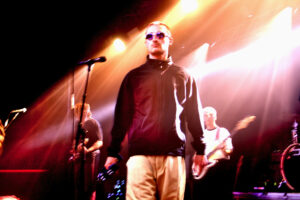 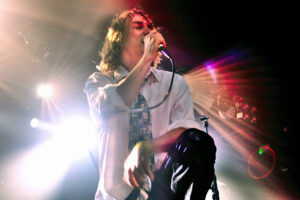 Having only ever listened to Snapped Ankles on record previously, I had no idea that they did a whole shamanic forest people get-up in their live show.  They probably have the most equipment out of all the musicians I’ve seen tonight. There’s a multitude of wires that snake across the floor to make up their dual-backed synth set-up. Despite this they don’t take that long to set up.  Someone asks me if I’ve seen them before, I haven’t, she says I look like I have.  When they begin to play, there’s a murmur of frenzy building amongst the audience, throughout the set there’s a constant throbbing that’s almost like listening to house music.

It is the heartbeat of the music and its tribal echoes are emphasised as the crowd become immersed in the experience as the central vocalist moves off stage and into the throes of bodies.  People groove continuously and a photographer who I briefly talk to bounds off to take pit shots yelling “man, it’s good to be back!”  The branch masks make it a very surreal experience and it works to create a claustrophobic feeling of elated madness.  The band wanted to play in the caves they say but they weren’t allowed because of “health and safety”.  There’s a feeling of exhausted euphoria as people leave following the set; it’s the closest it comes to feeling like a real festival, the kind that you camp at and witness peoples tents burning at the end of the weekend. 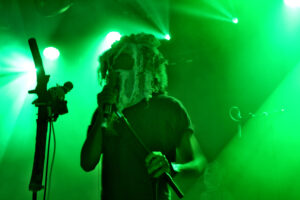 We try to catch local duo Arch Femmesis at The Angel but I have to dash off after about two songs to get my last bus.  From what I could catch it seemed like it was going to accumulate to a brilliant 30 minutes of music though, lots of attitude, sort of like if Peaches had been living in a Berlin art commune for a few years.  Before they even start playing someone from outside accidentally knocks over the stage banner into their gear, which the pair drily observe is a good sign before they get going – the audience is that uncontainable.  I attempt to take pictures but for some reason, my camera keeps crapping out. It’s the most acerbic electro-pop I’ve ever heard and I look forward to watching a proper set when I don’t have to leave early next time.

Images of Do Nothing, Joe and the Shitboys and Sorry by James Robert Birtwhistle (www.indiehorse.com / @indiehorse).