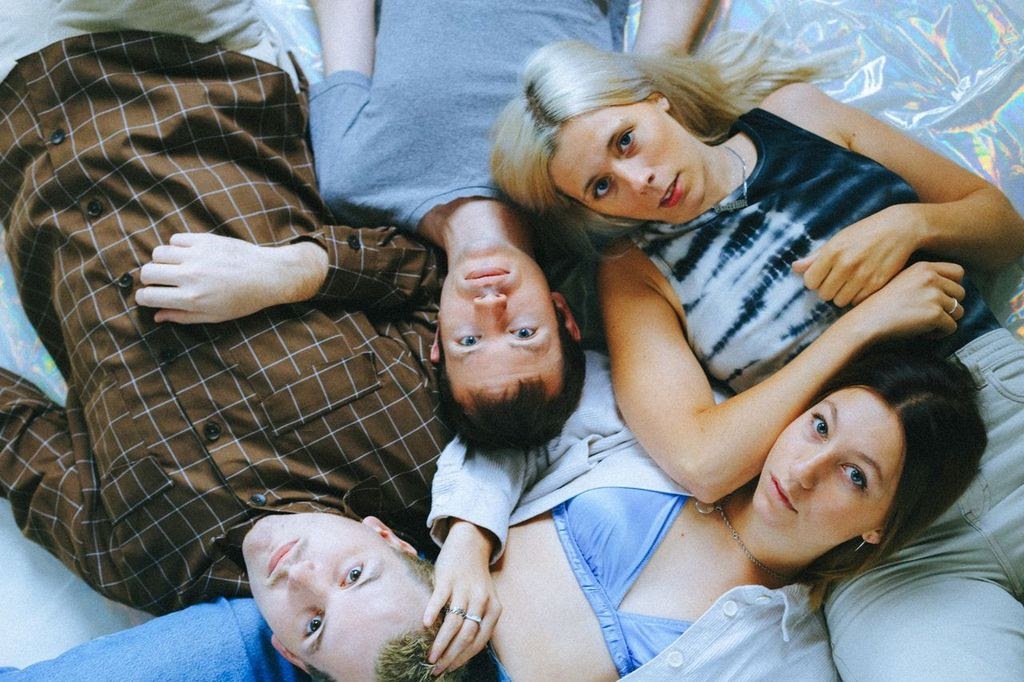 Presenting the latest haul of new music picks, this week Julia Mason and Simon Godley are supplying the most exciting tunes they have found recently. Here’s our playlist follow along.

Why we love it: Isle of Wight four-piece Coach Party have released their new single ‘FLAG’ (‘Feel Like A Girl’) on Chess Club Records.  The synchronicity of its release in the week of the conviction of Sarah Everards murderer makes this track even more relevant and compelling.

Lead singer/guitarist Jess Eastwood explains: “‘FLAG’ is a song for those who know what it’s like to feel unsafe, objectified or hurt by someone. It’s an intense anger where you just want to see that person suffer as much as they made you suffer.  It takes you to the point where you’ll do anything to protect the people around you from this person, whether you know them or not. Look out for your mates.”

The lyrics are wrapped up in a ferocious soundscape with three guitarists making themselves heard.  Those riffs are wicked and complement the intensity of the words:

“Wanna hurt you back, just like how you hurt me
When did you become this obsessive freak”

The track is accompanied by a not to be missed video which further strengthens the important, relevant and aggressive message of the track.  Coach Party have stated that their inspiration for song-writing comes from the struggles of real life, at times entertaining but at other times dark.  ‘FLAG’ falls into the latter camp and succeeds in delivering an assault on the senses on such an important subject matter.

At Sneaky Pete’s in Edinburgh on Thursday night the band acknowledged that it’s a tough time for for women right now.  But they also demonstrated their skill with a wild Nirvana / Lizzo mash-up.  If that doesn’t prove their versatility then goodness knows what will! (Julia Mason)

Fatherson – End of the World

Why we love it: After a three-year absence, Fatherson returns with the dreamy synth-laden ‘End of the World’ out now on Easy Life Records.  The Kilmarnock-born, Glasgow based trio created this track over the first lockdown in the spring of 2020.  This is not the doom and gloom expected from the track title, in fact, quite the opposite.  ‘End of the World’ is full of optimism about the future, reminding us that life may have shifted and changed but that doesn’t mean that fun has to come to an end.

“If it’s my last day on earth, I’m doing whatever I want,” what a great sentiment to hold onto.  The track embodies this feeling of positivity with lyrics that remind us that actually it’s not the end of the world.  Such a clever use of a familiar phrase.  The music builds in its emotional intensity and the accompanying video has the message that it’s NOT the end of the world at its very core.

As the band explains: “End Of The World is about going through tough times and coming out the other side. Suddenly you realise that you’re actually fine. So what if someone doesn’t love you anymore? Nevermind that life isn’t as it used to be. It’s definitely a bit tongue-in-cheek. If the world really was ending, you’d want to forget all the shit that’s been thrown at you and go out and have fun.”

Why we love it: The Philadelphian noise-punk quartet Empath have released a new single ‘Born 100 Times’ on Fat Possum Records.  Quoted in numerous publications as a One To Watch in 2019 I can see why.  With the pandemic beginning to loosen its grip, this is the band’s first new music since their critically acclaimed album Active Listening: Night On Earth.

The punk noise makers provide a fabulously chaotic track in ‘Born 100 Times’. With a frenetic instrumental onslaught, the vocal provides a melodic overlay that beautifully counterbalances the soundscape.  The punk aesthetic is there but this combination with pop melodies add a twist that gives this track a sound of its own.

Singer/guitarist Catherine Elicson says of the track: “‘Born 100 Times’ is structurally very simple, consisting of a couple of hooks and a verse sung overtop of two repeated chords. I imagined a restructured pop song, having it start instantly with the hook and then eventually reaching a verse. While the lyrics are a somewhat spiritual reflection on devotion and power in one’s life, an isolating and very internal experience, the video offers a different viewpoint,”. (Julia Mason)

Why we love it: some 16 months after the release of the New Zealand singer-songwriter Reb Fountain’s critically acclaimed self-titled album, comes its follow-up Iris. Written and recorded during lockdown the songs on the new album emerged out of that claustrophobic period in Fountain’s life and they capture those intense feelings of isolation, tumultuous change and transition. The title track from the new record embraces a euphoric sense of reawakening. Speaking about ‘Iris’, the song, Reb Fountain says “‘Iris’ is a love letter to my sisters and my many selves, an embrace that holds all the stories we never shared, a rainbow connection, a feminist arsenal, a space to rest, a prism for the heart. What’s in your heart that you dare not speak? If love be our currency, what stories we would tell?” ‘Iris’ holds dear a powerful narrative amidst this music born of our recent times. (Simon Godley)

Why we love it: the Angolan-Portuguese artist Pongo is back with her second single of the year, ‘Começa’. The genesis of the song comes from “a sleepless night spent by Pongo in a creative house, listening on repeat to DJ Maphoriza, the king of South African amapiano – a style of melodic electro specific to Durban.” Here the Lisbon-based musician further develops her exciting interpretation of kudoro, a form of African electronic music that first emerged in Luanda during the Angolan Civil War as a positive creative counterpoint to those most difficult of times. ‘Começa’ is joyful, vital and immediate. The song’s accompanying video, directed by Léo Joubert, reflects all of the irresistible energy and excitement of Pongo performing the song live. Pongo is here on tour in the UK in November. Dates/tickets are HERE. (Simon Godley)

Why we love it: Their contribution to the Sub Pop singles club, Vol. 6.  It is the first new music by the band since their debut album Uppers was released back in February 2021 on Sub Pop. The London 4-piece create music perhaps best described as organised chaos.  The combination of the pounding drumbeat, the guitars full of reverb and menace and all overlaid by the impassioned vocals of Charlie Drinkwater.  ‘Lifesize’ has a certain gravitas, an urgency that demands that you sit up and take notice.  The observational lyrics question our social fabric and the morals of those in power.  The track decries the patriarchal system in place, a system that currently goes unchallenged and thus is perpetuated. Charlie says of the track: “‘Lifesize’ is about the worship of the ‘strong man’ image often present in our political and cultural discourse. One where the patriarchal underpinnings of our society and political structure goes unchallenged. After a particularly gruelling year, when people have looked to leaders for strength, we’ve found instead empty gestures and contempt. (“Talk like a salesman, walks like the Pope”) We don’t need more macho bravado; society needs empathy and compassion.” TV Priest began their extensive UK and European tour on Friday 1 October at Ipswich Sound City.  The band will go on to share the stage with A Place to Bury Strangers in North America in early 2022.  Do try and see TV Priest live as that organised chaos creates a thrilling set live. (Julia Mason)

Why we love it: What a groovy, breezy, hook-laden piece of electronica.  The harmonies add the light, fun element to this dance-inducing track. This is the last single released from Porijs’ debut EP Baby Face which is out now on the bands own Oat Gang Records label.  The 4-piece are currently studying in Manchester.  They write, record and produce their modern alternative pop sounds in their student house.  The individual pieces are recorded by each member in their separate studios/bedrooms and the sounds are merged together meticulously to form their distinctive “oats” sound.  This DIY approach is impressive particularly considering these funky results.  This is fun, dancey but with a garage element all fused in together. And that video is one to watch.  How on earth it was produced is beyond me, but it is beguiling in its imagery and quirkiness. “ ‘Can’t Stop’ is a super intense, pretty relentless dance tune, about uncertainty, changing your mind and being completely consumed by your thoughts – but all while having a pretty sick time. After I wrote the song, it was just a super rushed, messy garage beat with loads of dodgy synth patches and autotune singing, but I brought it into the band and we figured out how to make it work, as we always do! One of the maddest to play live I think. We all have pretty manic parts to play, but that just adds to the manic energy.”  Tom Oat, Porij. (Julia Mason)