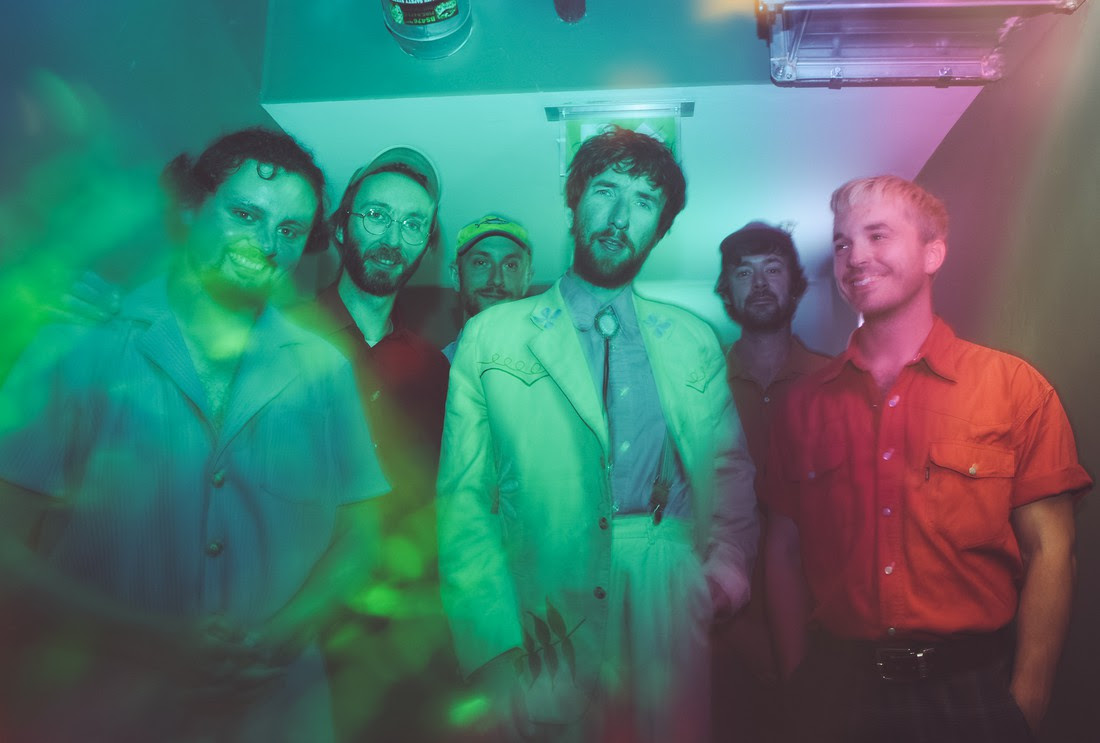 The Welsh band were the highlight of the festival season with stints at EOTR & Green Man, noted for their effervescent and explosive live performances, which they’re excited to bring to London’s Old Blue Last this Thursday.

Speaking on the track Glyn adds:

“On a cold winters eve I was walking the streets of London feeling a bit blue, and then stepped in some wet sticky chewing gum. I looked up to the sky in distress and found the moon smirking at me. Kind of put things in perspective. The lady in the song came to me in a dream soon after and sometimes pops back into my siestas during a snooze. We had the pleasure of recording this song at Stiwdio Sain – a gem of a studio in Llandwrog where some classic Welsh Language psychedelic folk music was recorded in the ’70s.”

Blomonj (a play on words of the dessert ‘Blancmange’) could be the perfect title of a debut EP from the Welsh mavericks: idiosyncratic, hard to nail down but most importantly full of absurdist whimsy and charm and inspired by the latest single ‘Jelly Vs Blomonj’. Melin Melyn have thrown all prior conceptions of their previous sounds out the window returning with, once again, a completely unique dadaist-ballad brimming with Pedal Steel and country-tinged slide guitars that culminates into an almost ‘honky-tonk’ finale.

Hidden behind the cryptic and seemingly inane lyrics  (“Go and run through a wall of cold porridge if you like”) however, is a touching and sentimental metaphor of love, loss and companionship. It’s a testament to the songwriting ability of lead vocalist and chief songwriter Gruff Glyn, whose ability to take simple and easy to understand lyrical constructs and invert them almost beyond recognition.

Recorded in two parts – half in 2020 with Tom Rees (Buzzard Buzzard Buzzard) and Dylan Morgan (DD Darillo, Boy Azooga) producing, the other at Stiwdio Sain in Llandwrog by Llŷr Pari (Omaloma, Palenco) who also mixed the EP – Melin Melyn’s Blomonj is less built on individual “songs” and more on weird tales of colourful characters and magical worlds that aren’t in fact that far removed from today’s off-kilter reality. It’s eccentricity at its finest & paradoxically most accessible. The now six-piece are not so much round pegs in square holes as they are determined to throw the whole box out, blurring the line between folk, rock, pop and psychedelia.