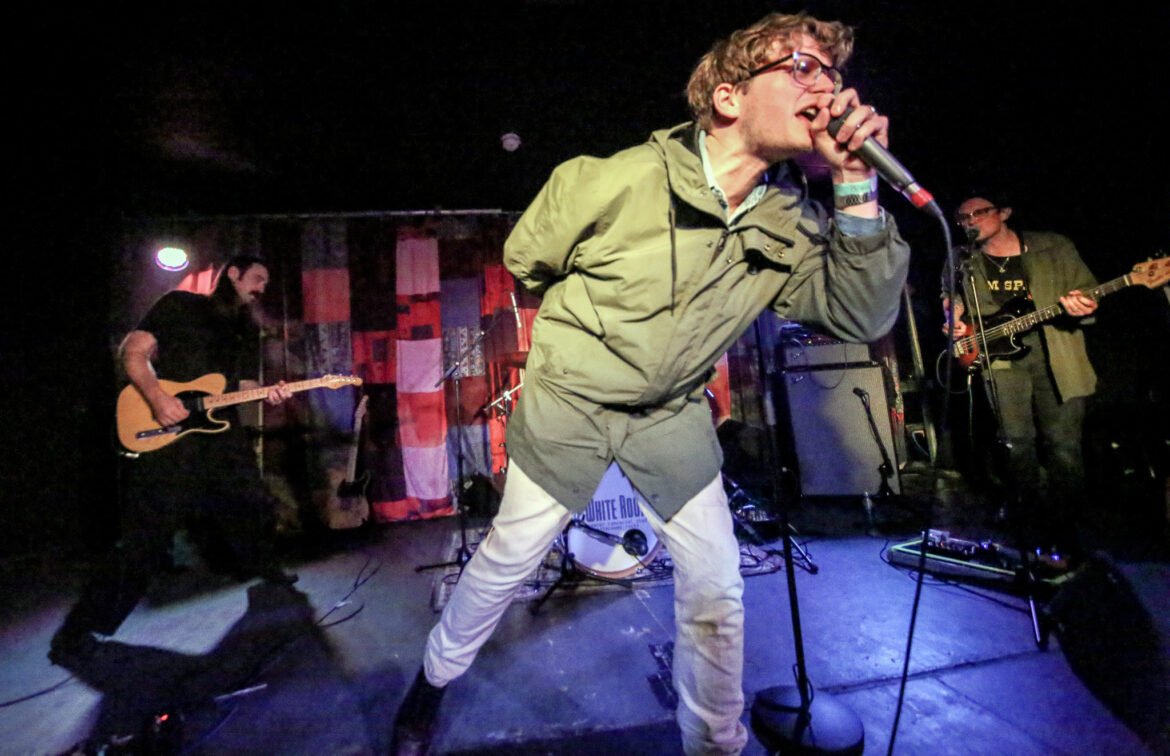 Where: The Crescent Community Venue, York
When: Friday 22nd and Saturday 23rd October 2021

It’s party time at The Crescent. Once the pandemic-enforced restrictions around capacity at music venues were lifted back in mid-July the former working men’s club reopened its doors to live events. It was all very tentative to start with – socially distanced shows being the initial order of the day – before more regular gigs returned. But by the time we arrive at A Slow Education, with the 300 capacity tickets having long since sold out, the old place is really buzzing.

Taking its name from a Silver Jews’ song and postponed from its original dates at the end of May the festival is now having its inaugural outing. Spread over two days, the event strikes an excellent balance by drawing its programme from a pool of local talent and several notable left-field acts who are based in other parts of the country. 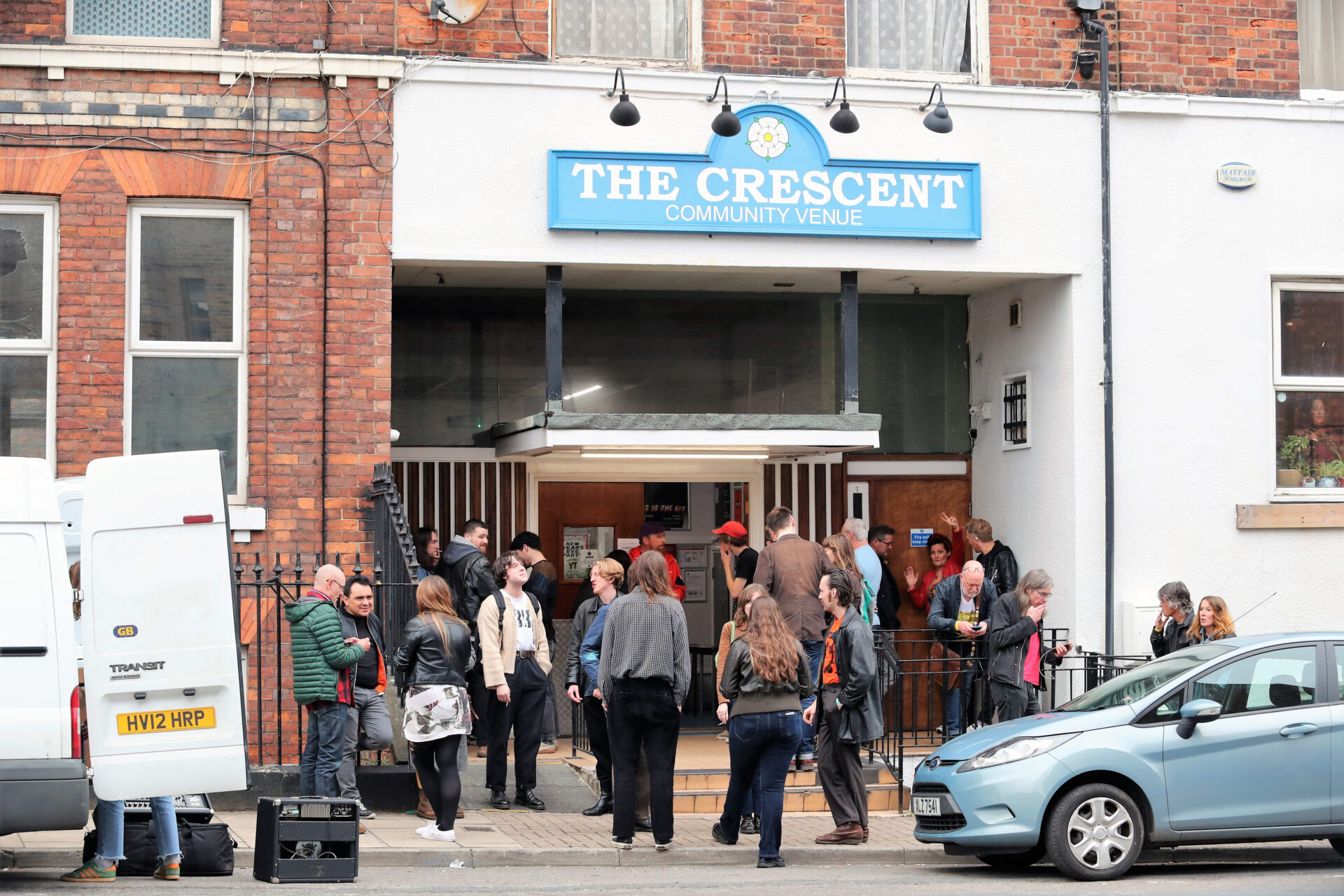 Shortly after 8 o’clock on Friday evening with the main concert room at the Crescent already starting to fill up, the York duo Missing Kids get A Slow Education off to a very solid start, the pair’s guitar and drums merging to form a raw, elemental sound. All the way from South London are Bleach Lab and the four-piece gather an undeniable momentum as their set develops. By the time that they reach an epic conclusion with ‘Flood’ they have transcended their signature dream-pop, replacing it with something that is altogether more cinematic.

Yard Act’s charismatic frontman James Smith is eager to tell us that earlier on today The Guardian reported that someone no less than Elton John had named the Leeds’ four-piece as being one of his current musical faves. “It’s talking, it’s music, it’s really interesting,” said the man from Pinner. Smith put Sir Elton’s public recognition down to the band playing ‘Benny and the Jets’ every single night in the car as they make their way back to the nearest Travelodge from a gig they have just played. This anecdote may or may not be true but what is not in any doubt is the fact that Yard Act are certainly getting noticed.

Yard Act’s debut album The Overload is due out in January and in a little under an hour they slalom through the record further injecting its incendiary grooves with a perfect blend of vitriol and good humour. They head off back to a nearby Travelodge with the seismic noise of ‘The Trapper’s Pelts’ still ringing in our ears and, presumably, the far gentler strains of Goodbye Yellow Brick Road caressing theirs. 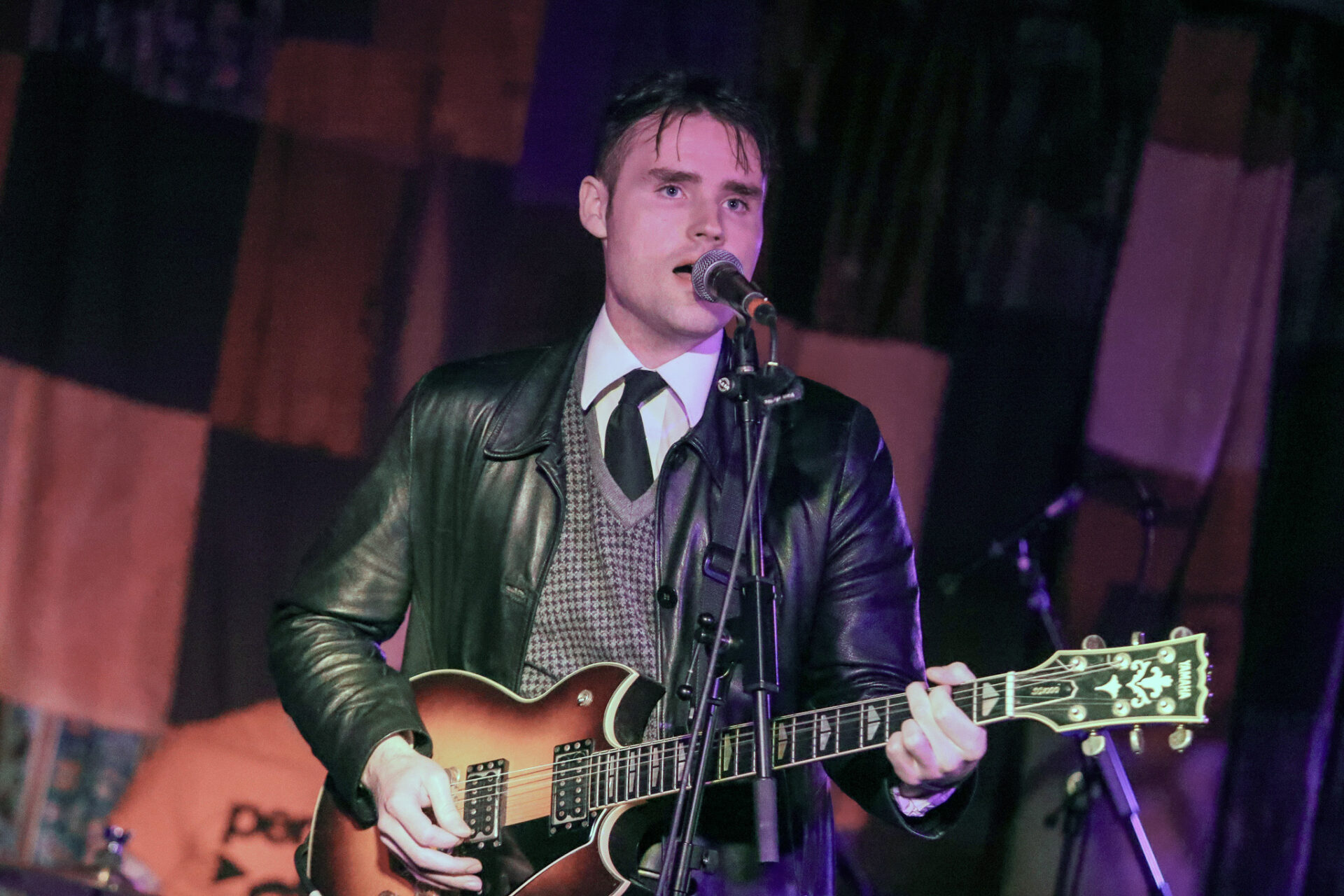 Two of York’s finest get Saturday afternoon under way, one after the other and each equally determined to wring as much out of their allotted half hour as would appear to be humanly possible. First up are Perspex, combining style with substance and blurring the lines between art rock and dance music. The chiming guitar riffs and instrumental interplay hark back to early Talking Heads, something to which Perspex add their own singular stamp. Cowgirl aren’t hanging around either. With nary a pause for breath they rattle through ten songs. It is high octane rock’n’roll. They finish with a febrile blast of ‘You’re Not There’ which evokes certain memories of Joy Division’s reading of ‘Sister Ray’ from their album Still. With that in mind, I wonder what Cowgirl’s version of ‘Louie Louie’ would sound like?

Since first catching The Lounge Society a few months back at Deer Shed: Base Camp Plus the Hebden Bridge four-piece have certainly added more grit and emotional heft to their live performance. The subversion of new single ‘Last Breath’ embodies this increased confidence. Fellow Yorkshire band Treeboy & Arc from neighbouring Leeds have been around a little longer but share with The Lounge Society a sense of freedom in the way that they play. We get recent EP Life Preserver in full as they finish off a vibrant set with the double salvo of ‘In Dreams’ and ‘The Condor’.

The recent dissolution of the Bristolian outfit Lazarus Kane creates a gap in the running schedule which for some inexplicable reason I am unable to properly digest resulting in my completely missing Bull, arriving back at The Crescent just as they finish. Judging by the happy, smiling faces of the punters as they file out from the heat of the concert room to step outside for a breather, the York legends who last year signed to record industry giants EMI had clearly done well. 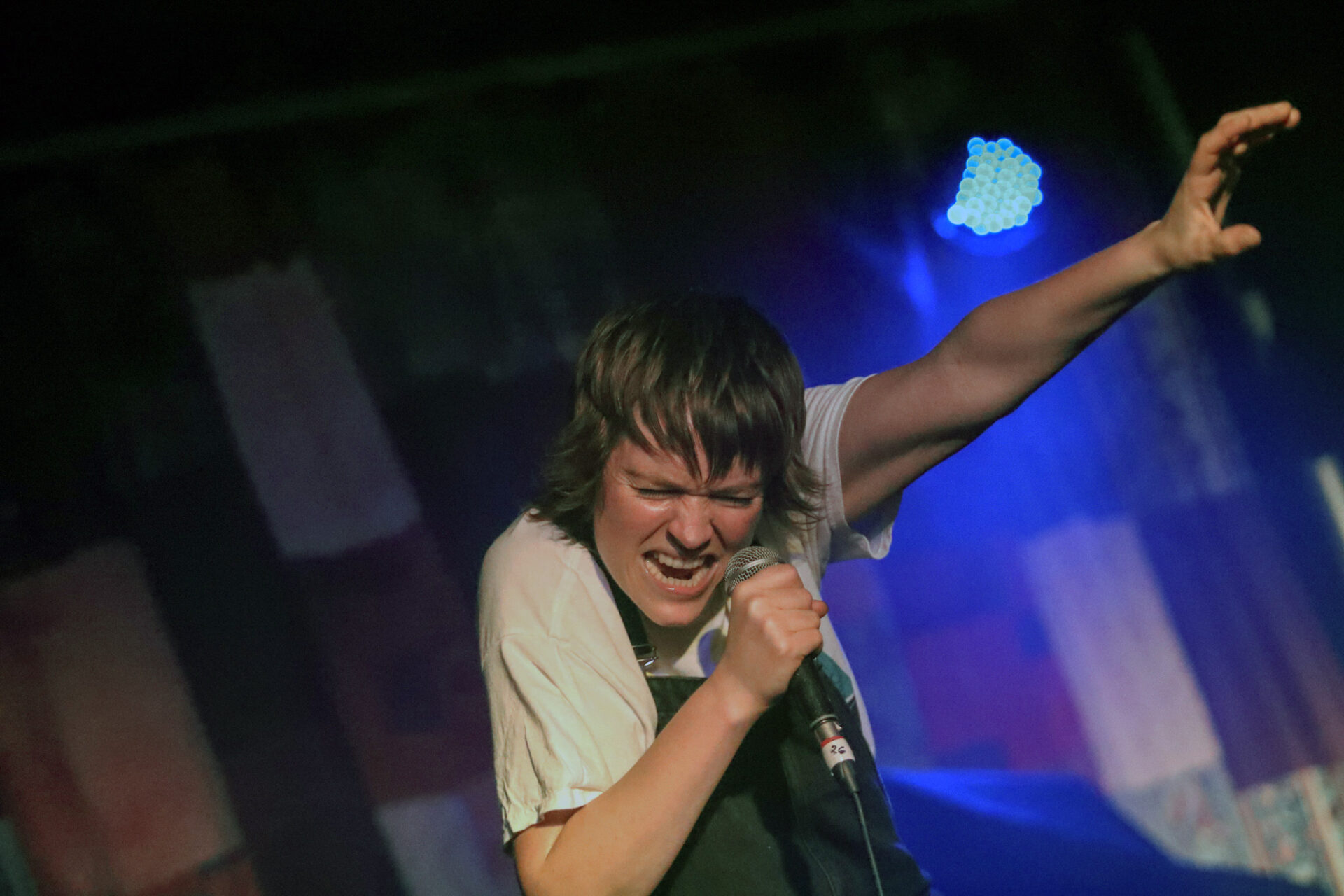 This leaves it to the two festival headliners, first Billy Nomates and then finally Warmduscher, to bring the first A Slow Education to what is a resounding and most triumphant close. Billy Nomates presses play on her laptop and off she goes. A maelstrom of effective energy, she commands the stage. Over a thundering soundtrack of minimalist beats, basslines, samples, and the occasional ringtone she bristles with indignation at the modern world in which she finds herself. Yet beneath her fury and constant search for answers there lies an undeniable warmth.

“Keep Living The Dream” exhorts Clams Baker Jr. as he leads Warmduscher onwards and upwards. It is an invitation that many in the crowd are more than happy to accept as they re-enact scenes in front of the stage reminiscent of delirious supporters on football terraces of the 1970s after a goal has just been scored. It is all riotous good fun as Warmduscher transform into a wild party animal comprising equal parts the MC5, Alabama 3 and Baby Huey and the Babysitters. 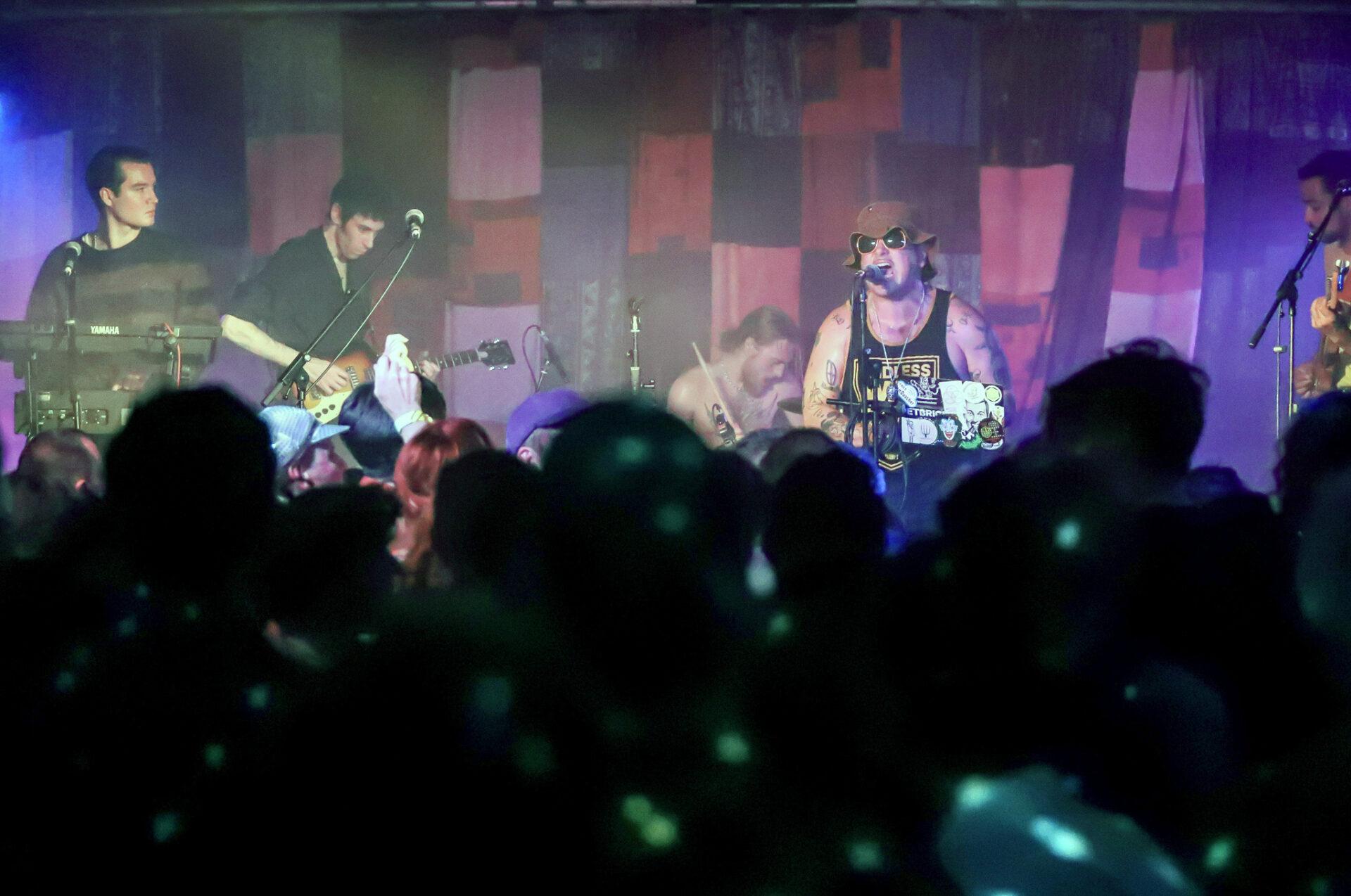 A Slow Education was brought to us by Please Please You and Brudenell Presents in association with The Crescent Community Venue in York.

More photos from A Slow Education can be found here: