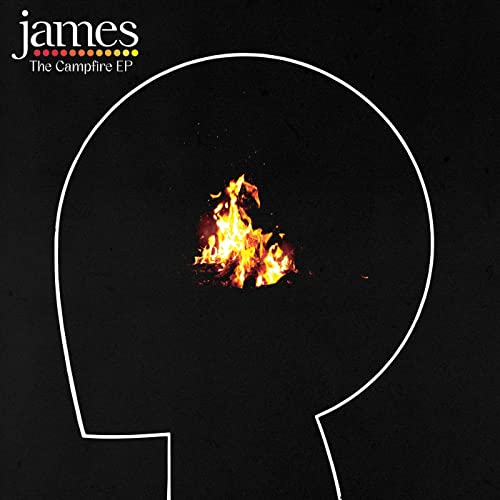 In June of this year, James made their welcome return with their sixteenth album, All The Colours Of You – produced by Jacknife Lee, the eleven-track album boasts some of the freshest and most personal tracks of their almost four-decade-long career.

Ahead of the albums release, the band spent time rehearsing for their forthcoming live shows at Yorkshire’s Broughton Hall Estate, in which they recorded a music video for ‘Getting Myself Into’ – their first full-band music video in over twenty years. The Broughton Hall magic doesn’t end their either as the band have released a new four track EP that captures the magic that the nine piece created around a campfire one evening – featuring three tracks from All The Colours Of You and fan favourite, ‘Just Like Fred Astaire’ from their 1999 album, Millionaires.

The first track of the EP is one of the albums more downtempo numbers, ‘Miss America’, which we’re introduced to via beautiful violin work from multi-instrumentalist, Saul Davies. A beauty from start to finish, ‘Miss America’ is often overlooked – which we can’t imagine will be the case for much longer once people spend time with this hauntingly beautiful rendition.

Next is ‘Recover’, which tells the heart-breaking tale of Tim’s father-in-law’s recent passing due to Covid. Echoing ‘How Hard The Day’ from the band’s last album, Living In Extraordinary Times, the track’s introduced by melodica from keyboard maestro, Mark Hunter. With delicate violin work from Saul and accompanied by stunning harmonies from newcomer, Chloe Alper, there’s a real vulnerability to Tim’s voice that’s sure to trigger a few tears in a live setting.

The third track is ‘Magic Bus’, which we’re introduced to by the sound of whistling – adding to the campfire vibe. It’s particularly interesting to hear a stripped back version of this track as the original is one of the jauntiest tracks on the album. From the moment that the rhythmic beat comes in, the track not only feels like it’s building up to something, but it has somewhat of a menacing aura to it. Responsible for maintaining the tracks electronic elements, Andy Diagram’s trumpet adds to this before we reach what can only be described as an explosion of vocals that suddenly fall to silence.

Last but certainly not least is ‘Just Like Fred Astaire’ – described by the band to be their only love song, the track always soars in a live setting and judged by this version, that’s an observation that still stands when there’s no audience. The addition of Chloe’s vocals is quite something and it’s truly magical to hear her voice intertwined with Tim’s.

When we reviewed All The Colours Of You, we commented on how astonishing it is that a band with such longevity are able to avoid nostalgia, continually experimenting with their sounding and always challenging themselves and their fans – The Campfire EP is the perfect example of this. What makes James such an exciting live band is their talent for changing things up and delivering totally different versions of their tracks – something that they’ve exceeded expectations in with The Campfire EP and what we can hopefully expect on their upcoming UK tour.