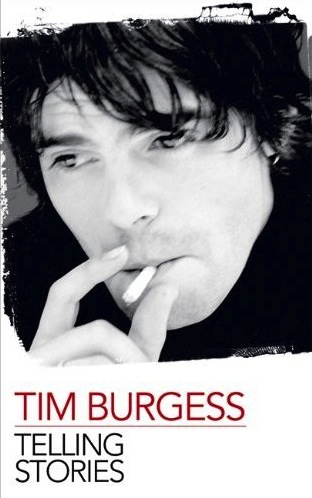 As a devourer of this type of music biography/autobiography, I have never come across a more unpromising opening paragraph than the following:

“I don’t think like a book, in chronological thoughts; it’s more a question of thoughts invading my head and then inviting others in…I’m hoping for your sake it all comes together in a book-like way.”

Despite this, I was eager to read on and get the lowdown on a singer whose band are often described as ‘Perennial Indie survivors The Charlatans’. They were perhaps the only band who straddled the Madchester and Britpop eras and beyond without becoming typecast or contaminated by either genre. Never the biggest band of either era, they were nevertheless respected by their peers and a formidable live act. I can’t deny that I was also hoping for a ration of the usual gossip about ‘who-had-feuds-with-who’ which undoubtedly fuelled the music scene in the 90’s. In the event, the only real bitchiness on display in this book is when Burgess describes Alex James as a ‘purveyor of cheese’.

Eschewing the services of the standard-issue ghost writer, Tim instead opted for the method of recording his own voice telling stories about his life and then transcribing whatever he produced. As a result of this, the book has a slightly off-kilter rhythm which, at its best, reminded me of the disorientating, folksy style of Bob Dylan’s ‘Chronicles’, and at it’s worst became a series of pedestrian lists. An example of the latter was an explanation of the gestation and recording of each track on The Charlatans’ debut album ‘Some friendly’, or the extensive printing of interviews from the mid-90’s as space fillers.

The main impression from ‘Telling stories’ is Tim Burgess’s over-riding passion for music, and that he is perhaps one of those chosen few who could never have done anything else for a living. His youthful passion for New Order, The Jam, The Fall and The Smiths is vindicated in the course of this book as he gets to meet and play with all of his heroes, and is still enough of a fan that he is unapologetic about getting them to sign his old vinyl. There is an amusing section detailing a drinking session with Liam Gallagher culminating in them producing competing demos of soon-to-be popular songs, “like some northern game of Top Trumps”. He describes music in a dreamy, mystical style which contrasts sharply with the modern day, market-saturating commercial behemoths like Coldplay.

If it’s sex and drugs and rock n’ roll you’re reading for, then there’s plenty of the second two on offer and precious little of the first. Tim’s prodigious drug-taking is described with unseemly relish, to the point where he manages to detail the precise method of blowing cocaine up the anus of a close acquaintance with all the matter-of-fact practicality of Delia Smith explaining what to do with troublesome leftovers. The story unfold from here with the predictable ‘my drug hell’ consequences and the equally inevitable ‘finding of the self’, which in Tim’s case encompasses Transcendental Meditation.

Burgess acknowledges the omission of sex in his book by, rather sweetly, explaining that he’s always preferred to have a girlfriend rather than indulge in the many groupies who have offered their services. Even more quaintly, he compensates for this deficiency in a rock n’ roll memoir by treating us to a list of the smallish number of girlfriends he’s had and why he liked them. Keith Richards this is not.

So all in all, this book is a bit like Tim himself: endearing, occasionally a bit vague, quirky, likeable, spiritual, and kooky. It’s probably only for you if you like this type of thing but is certainly different to the majority of the bland, ghost written stuff that is often served up.