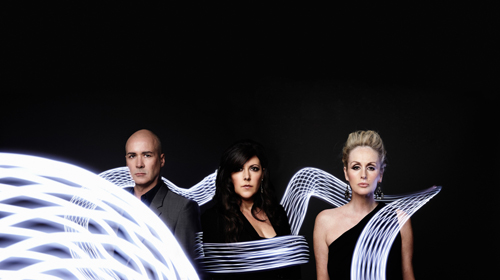 The Human League have announced a fifteen date UK tour starting at the Brighton Dome on 23rd November 2012, taking in London’s prestigious Royal Albert Hall on 26th November, and culminating at Norwich UEA on 11th December. The tour celebrates the band’s 35 years in the business and is titled XXXV.

Last year the band released a new record on Wall of Sound entitled ‘Credo’ produced by I Monster, their ninth studio album. ‘Credo’ is part of that particular pop lineage that goes from Bowie, Roxy and Kraftwerk to Donna Summer, Chic and Michael Jackson to Lady Gaga, Usher and Girls Aloud. Supremely infectious chart pop music, only with the League you get an extra subversive “X” factor.
The Human League are more highly regarded now than in 1981 when they released their landmark album Dare! They’re used to everyone from Madonna to Moby, Pet Shop Boys to Robbie Williams, citing them as an influence.

Now the dubstep generation – notably, the acclaimed Darkstar, who cover the League’s 1982 B-side ‘You Remind Me Of Gold’ on their current album, North – have begun to pay homage to the original sound of Sheffield. Then there are the ‘L’ girls, the new generation of synth-driven female pop artists, who have got in on the League-adoring act: La Roux is a known admirer of the electro pioneers, while Little Boots is such a fan she requested Philip Oakeys input on her debut album. Even Lady Gaga professed to be a devotee when she met them recently; they had adjacent dressing
rooms at the ‘V’ Festival.

The band gave us the greatest ever Christmas Number 1 single with 1981/2’s ‘Don’t You Want Me’, have had four Top 10 albums and eight Top 10 singles in the UK as well as two US Number 1 singles and sold 20 million records worldwide: the most lauded TV program of recent times, time-travel saga Ashes To Ashes, based one of its main characters on Joanne Catherall, while the mighty Philip Oakey appeared in a recent episode of Top Gear at the personal behest of Jeremy Clarkson who regularly name-checks the League in his newspaper column.