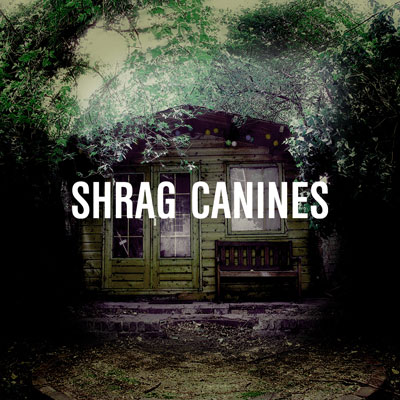 Canines shows Shrag as a gang out on a rampage. The songs teem with bodies in various states of excitement and disrepair, assorted parts of the anatomy being mentioned in almost every song, and there’s a good amount of kneeling going on. Careering through the corporeal, they celebrate the flesh on offer to the fangs of the record’s title. There are gentler moments too, such as ‘Chasing Consummations’ and ‘Jane With Dumbbells’; pauses for reflection in the midst of the carnage, focusing not on the havoc they’ve wreaked but glimpsing into other – softer, shimmering – worlds.

Opener ‘Tears Of A Landlord’, taking over a minute to kick in, has the chaotic sense of being let loose on a mission. They get a lot of mileage out of riffing on one chord, the song itself owing something to Gary Numan’s ‘We Have A Technical’. Single ‘Show Us Your Canines’ has elements of funk in the bassline and guitar but it’s still mired in Shrag’s own brand of dirty rock, continuing on with their excellent and distinctive use of interactive group vocals. As noted above, ‘Chasing Consummations’ switches gears into a lovely floating pop song. One feels the breezy rush of a pendulum upsweep, swinging you in time to the catchy double female vocal. Extolling the beauty of binary – “We love the fact of day and night, we all look good in black and white” – a Jane character is here introduced, who will resurface later to take centre-stage in CC’s sister song, ‘Jane With Dumbbells’. The lyrics throughout the record are excellent – enigmatic and oblique, yet enticingly evocative. And to reinforce the gang mentality, ‘we’s and ‘our’s abound, sung in unison as if indeed they are all in it together, unleashed and hellbent on appeasing their animal appetites.

‘Tendons In The Night’ dives back in with a taste for blood, a relentless sludging between two chords, shouting with dangerous, sexy urgency. And from Tendon’s “down on all fours” we find ourselves ‘On The Spires Of Old Cathedrals’, capturing a photographic city scene with a brilliant pop chorus and New Order-esque middle 8/outro to boot. Returning to the theme of the carnal, ‘Devastating Bones’ is a singalong glamrock stomper. ‘You’re The Shout’ is a particular highlight of the record, coming right in the middle and forging together Shrag’s rock and pop sensibilities. The bouncy verse with its pumping Rock riff sails into a beautiful, uplifting Pop chorus, a blissful squeal of ‘YES!’, as infectious as any indie-rock anthem. The post-chorus of ‘No More Memories’ is a blast of deliciousness, while, arguably, the two best songs close out the record. After the abundant interplay of vocals thus far, Helen’s solo voice in ‘Flinching At Forever’ is all the more effective, and when the others join in, the pre-chorus simply soars. Full of melodic abandon, this call-to-arms will have you jumping right in.

The mark of a truly excellent song is its ability to transport you to its own magic-tinged world, which ‘Jane With Dumbbells’ does wondrously. Its enormous yet delicate dreaminess sends one floating through prismatic rainy afternoons, staring out the window at hidden rainbows further obscured by the grey, while some other part of yourself slips off through soothing dreamspaces. Evoking a beauty both born of and counter to “those toxic mornings, those saccharine days”, ‘Jane’ joins the ranks of all-time great album closers.

A terrific record, Canines is a fine addition to the Shrag canon.