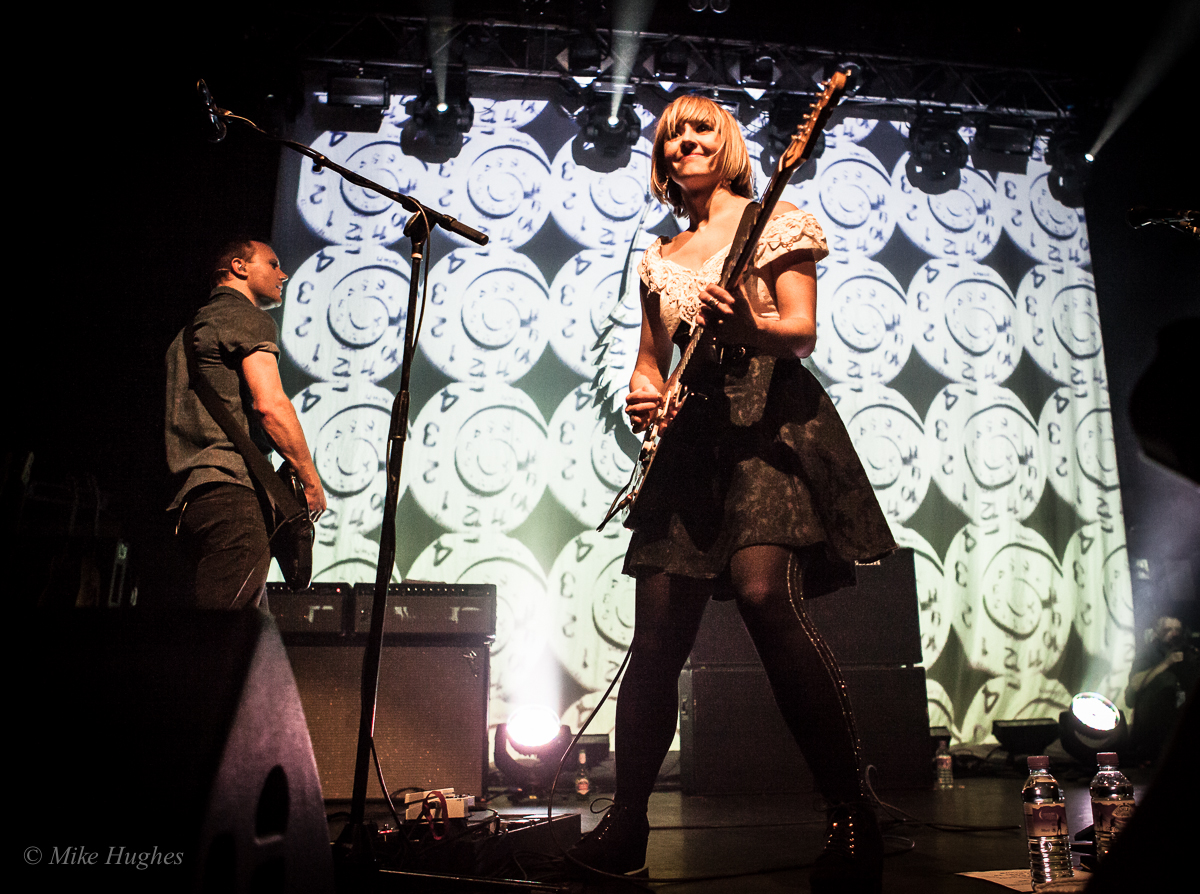 “Turn round. Turn round and look at me when I’m talking to you! There’s no fighting at TJF! That’s for the outside world. It’s different here!” Thus spake Ritzy Bryan, on stage at Manchester’s Ritz theatre. Ritz at the Ritz eh? In fairness, the fight was a little spat that got out of hand late in the set, nothing to write home about, and at least one of the protagonists sought Ritzy out after the gig, seeking and receiving absolution. What it did forcibly demonstrate was that real life is suspended here, and that once in the maws of the gig, you are very firmly in the special world of The Joy Formidable. A world where drummer Matt Thomas can be caught pausing to cup his ear to catch what someone in the audience has shouted – made easier by having his drum kit up on the front of the stage, set sideways, emphasising what an equal partnership this is, no being stuck at the back for him. A world where Rhydian Dafydd will playfully tap photographers on the head with the end of his Fender bass, before sitting down on the front of the stage to play for a while, legs dangling, looking for all the world like a nursery school music teacher. And a world where Ritzy will give her guitar over to the audience only minutes after finger wagging at naughty boys like your best friend’s big sister used to. The friend’s big sister that you had a secret soft spot for.

What is clear is just how masterful The Joy Formidable have become at this whole thing. They’ve always been immensely powerful live. I’m allowed a moment of nostalgia because the band had one tonight. When I first saw them in a back room in 2008, I came away with my fuses fried by what I described as ‘a wall of glorious fuzzy feedback’. That’s only got louder in the interim, but the remarkable thing is just how good they are – Ritzy in particular – at also being funny, charming, having the audience eating out of their hands. That makes them sound like show-men, and bizarrely, that’s a long way from accurate. What they are is 100% genuine, this is simply how they live their lives, all the time giving back more than they put in, and that’s what carries them on stage. Before the gig, leaflets were being handed out. Yes, we all get promoters’ bumph thrust at us, but this came with a verbal message, passed on mouth to mouth. “It’s for the after-show mate, no charge, it’s in the basement right here, just come down”.

This was the second date that I’d been to on this particular tour. My previous one had been their first night, weeks ago in Liverpool. That had been a smaller, more intimate affair. It always is in Liverpool. I’ll let you into a secret. The birthplace of pop music (well the Beatles at least) can’t pull a crowd to save it’s life, so whoever you want to go and see, if you want ‘up close and personal’, head for Merseyside. Tonight was an entirely different proposition. TJF gigs – even sold out London venues – are usually boisterous but laid back. You can move around, know what I mean? This was an entirely different affair. I was taking photos in the pit, and when I got out of there after three songs, there was nowhere to go with this densely packed crowd except to the back of the room. I actually headed upstairs, the Ritz having a fine balcony. Usually I hate doing that, I just don’t feel involved, but tonight was somehow different. I can personally attest that the good feeling spread evenly and precisely right the way to the back wall.

That’s when Ritzy had her moment of nostalgia, talking about how Manchester had always been a good town for them. The venue in particular held close associations. As Ritzy pointed out, herself, her mum and her granny, three generations of the Fieldhouse family, had at some point enjoyed the venue’s sprung dance floor. She then wanted to know if anyone had been at their first Manchester gig at the Night And Day Cafe (which was three weeks after I’d first seen them). Then, amazingly, Ritzy spotted someone from the stage that she recognised from that early gig. “Still with us then?” Tell me another major touring rock band, playing hundreds of gigs, where that is going to happen. It led the band to an early song. ‘While The Flies’, in a set pulling almost equally from old favourites and new album ‘Wolf’s Law’. Given this mix then, the large amount of relatively old material, I was taken aback when a low rumbling was taken up by the crowd, much quicker than me to recognise the opening lines and to start riotous chanting “Maw maw maw maw” (for any of you English speakers out there, rhyme it with NOW). Oh my lord how quickly has this song turned into a major rally call for the faithful? That’s when I felt the full force of one-ness, and yes, I’ll admit that I teared up just a little. Damn dust in the air. Again.

Much as I was enjoying my eyrie, it was time to move, and I hustled back down stairs, hugging the wall, my camera over my head granting me safe passage to a gap I’d spotted on the barrier extreme stage right. I was in time for the finger wagging telling off, then to see Ritzy climb down into the pit to exchange hugs with more of the faithful. The band came to the end of their official set list, went off, came back and played a beautiful encore of ‘Forest Serenade’, a time-slowing version of ‘Wolf’s Law’s title track before letting loose on their classic ‘Whirring’, most of which Ritzy played stood on Matt’s drum kit, before climbing over to finish the gig with a resounding whack of that massive gong that gets lugged around to be hit precisely once per concert.